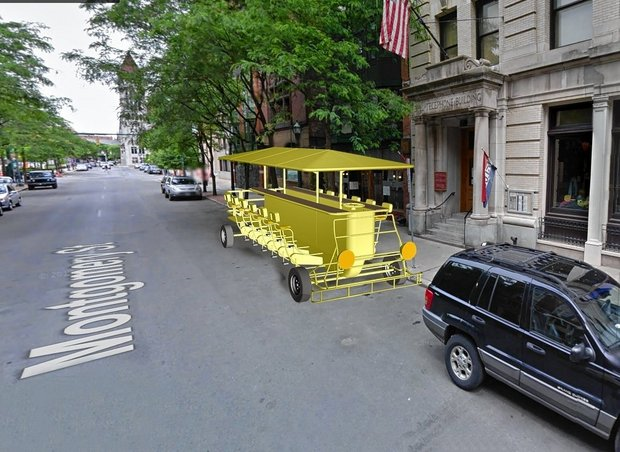 A new innovative form of transportation for tourists is on its way to Syracuse.

There is a local initiative intending to resurrect and revamp an idea dating back to the late 19th Century: A bicycle. It’s not a standard, run-of-the-mill tandem bicycle built for two. With capturing and embracing E.C. Stearns and the world-renowned cycle hub Syracuse once was, the “Big Yellow Fellow” built for over a dozen people is anticipated to roll into town this upcoming year.

From across the booth at Funk ‘n Waffles, Michael John Heagerty spoke over jazz soundtrack background. “It will be similar to how we’re sitting,” he explained, holding a latte and making note of the table in between, “except we’d be holding a beer and peddling.” In similar fashion, the pedal pub will be frequenting many — if not all — of the downtown festivals with musical accompaniment of their own, possibly emphasizing the experience.

He added that it’s more than a perceived “barcycle,” but it’s an extension of the local tourism initiatives, and this is especially true in raising the bar on his own NOexcuses mission. In cooperation with Michael Giannattasio of SALT Makerspace and Onondaga Historical Association (a primary source Heagerty credits for his acquired historical knowledge) the dream is nearing a reality.

The only thing standing in the way is raising enough funds — at least $16,000 — to construct “Big Yellow Fellow,” to get the permits and licenses taken care of, and then maintaining the consistency and popularity of such an attraction. However, Ken and Phillip Szal’s Buffalo and Rochester Petal Tours have already proved their worth. Albany also established its “Brewcycle” in 2013. It only makes sense that Syracuse steps in line with the rest of the major upstate cities.

Similarly to sitting on the new tourism toy, it will take multiple people to get the petal pub rolling, and a GoFundMe page has been set up. 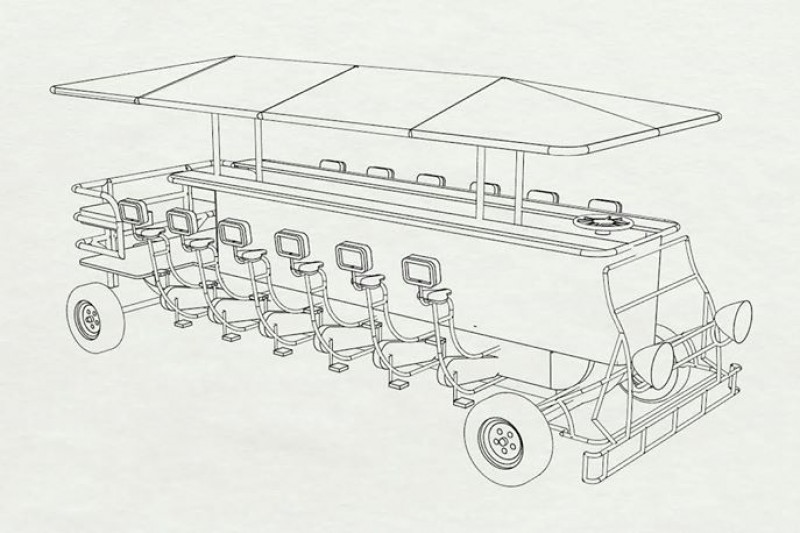 It’s been marketed heavily for community use, but free rides aren’t in the grand scheme of things — well, not for everyone. There are different levels of contribution; each level has designated perks. Where only donating $10 or $20 will give you free hugs and social media shout outs, contributing more will get you more: $100 (a key chain, one free pass for two people), $500 (everything mentioned and your name engraved), or $10,000 (everything mentioned, more perks and shares in the business). All of the tiers are explained on the GoFundMe page.

The rides, which will run between two and two and a half hours, will cost each individual $30. Sessions will include the historical tour and two New York-based adult beverages; all tours are for ages 21 and over. Aside from frequenting festivals and special events, there is opportunity to obtain the vehicle for private parties.

Heagerty wants to accommodate and allow anyone and everyone to ride, and the “Big Yellow Fellow” will be ADA friendly.  It will run in a variety of weather conditions with the exception of thunder and lightning storms; an overhang will protect patrons from getting soaked. “We’ll run it in the snow if we can,” Heagerty said, half-jokingly. “I’ll put chains on the tires and fix a plow on the front of it.” Waivers will have to be signed, and the Syracuse “barcycle” will be sober-controlled. The crowd will be kept in check as well as this is intended to provide a meaningful experience; belligerence will not be tolerated.

“It would be tough for the driver if people don’t pedal,” Heagerty said. The one tour guide, who would control the speed and stops of the cycle, would have an exasperating experience while carting around a dozen patrons and a bartender in almost Flinstone fashion.

The goal is to privatize the tandem with a twist, and some of the funds will go toward “promoting the hell out of it,” and eventual replications of the wheeled pub itself. He envisions Auburn, Oswego, Utica and other smaller neighboring cities benefiting from having one of their own.

“Syracuse was making 500 Yellow Fellows a day. It was the single most popular frame on the planet,” Heagerty said. He hopes the city will regain credentials as a hub, and it’s entirely possible with Giannattasio’s 3D printing capabilities. Conversation has been constant with the City of Syracuse in hopes of trying to secure the correct permits, and partnerships with Visit Syracuse and the Connective Corridor are plausible.

There is hope to get the entire project funded and the vehicle constructed by mid to late January, an almost two-month process, to showcase to Central New York by March 12’s St. Patrick’s Day Parade.

Keys to the Kingdom: Celebrating Syracuse’s legacy as Typewriter City
CNY Events to Warm Your Weekend
To Top