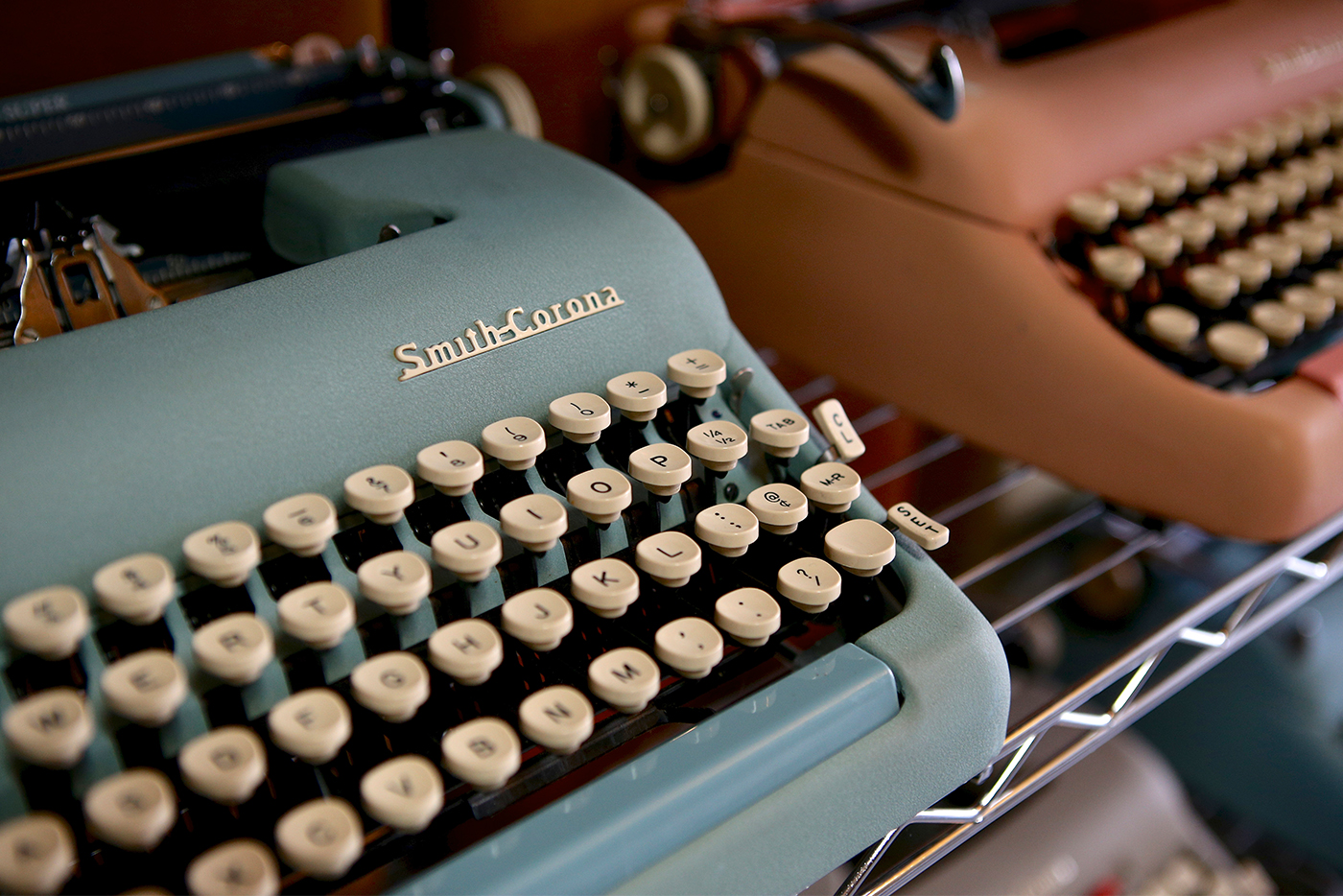 Keys to the Kingdom: Celebrating Syracuse’s legacy as Typewriter City

Twenty-five years ago, North Syracusan David Hawxhurst discovered an old L.C. Smith and Corona office typewriter in an antique shop. He thought it would make a great decoration for his real estate office.

Hawxhurst had no idea it would lead him to 44 states, four Canadian provinces and three foreign countries to seek out museum-quality examples of almost every Smith Premier, L.C. Smith, Corona and Smith-Corona typewriter.

With 166 Central New York-built writing machines, Hawxhurst celebrates Syracuse typewriter manufacturer Lyman C. Smith and his brothers Wilbert, Monroe and Hurlbut and their successors. Syracuse was indeed Typewriter City, as it helped change business and literary history as a hub of typewriter manufacturing.

In his surprisingly compact display — Hawxhurst houses the whole collection in his single-stall garage — one may see a range of models from the Smith Premier No.1 through the last word processor built by Smith-Corona in 2000 before production ceased altogether. 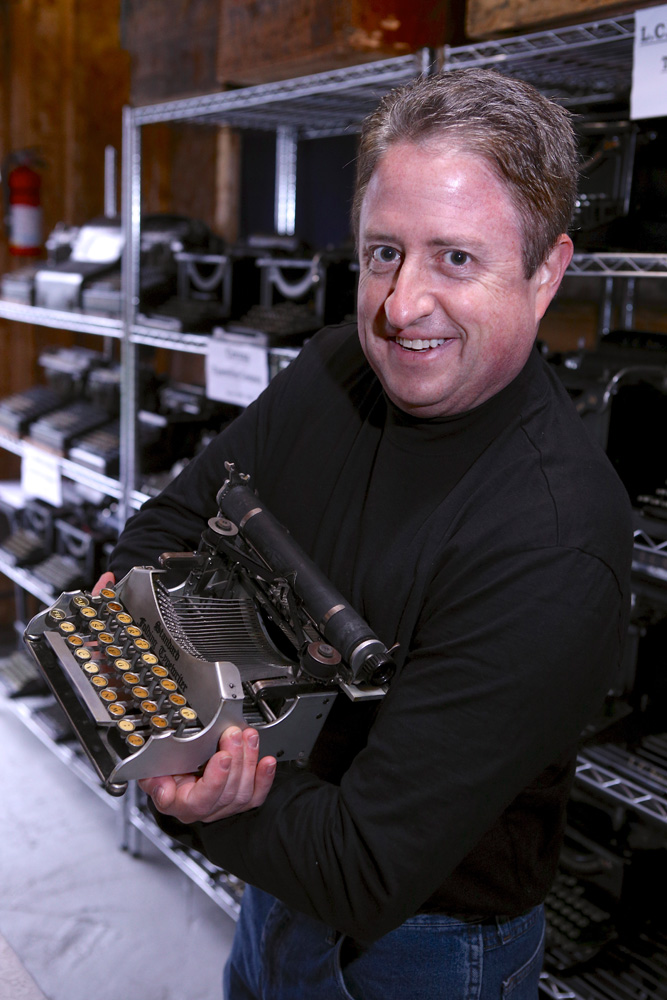 With the computer as today’s preferred method of word processing, we forget that the mechanical typewriter represented a huge leap in communication technology. In the 1800s, correspondence and recordkeeping with a steel dip pen was rank drudgery. The speed and clarity of typewriting offered a quantum improvement over a crabbed scrawl.

Hawxhurst says the introduction of the typewriter marked the practical beginning of women’s liberation. Through typewriting, women finally found entry into the man’s world of business. The scrivener with his ink-stained fingers and cuffs gave way to the efficiency of the typist, who tended to be female.

Because so many interchangeable mass-produced parts were required, factories already tooled to produce firearms were perfect for making writing machines. Alexander Brown, an engineer employed by Syracuse gun manufacturer L.C. Smith, saw the first typewriters produced by Remington (also a firearms maker) and decided he could do better.

Lyman Smith bankrolled Brown’s design and in 1886 he created the Smith Premier Typewriter Company along with his three brothers. The typewriters proved so successful that in 1890 Smith sold off the shotgun business to Hunter Arms in Fulton. The first Smith Premier factory operated at the corner of Clinton and Onondaga streets in Syracuse.

In 1893 Smith joined the Union Typewriter Trust, which included Remington, but broke with the trust to produce the front-strike visible-type L.C. Smith Typewriter in 1903. The Union Trust balked at the newfangled front-strike design, and the Remington and Smith Premier were upward-strike “blind writers.”

In most early typewriters, the type bars struck upward against the paper at the bottom of the platen, which the typist could not see. The platen assembly had to be lifted to view what was written. These machines performed adequately but even skilled typists found them inconvenient to use. With the introduction of so-called “visible typewriters,” in which the type bars struck forward against the front of the platen, the older style became obsolete. 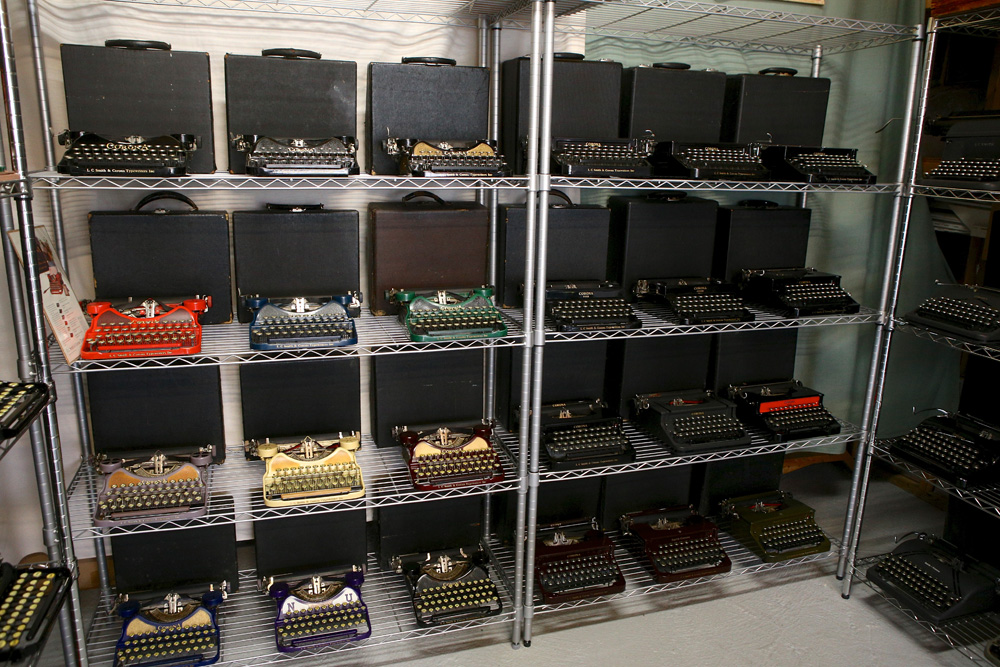 Hawxhurst owns beautiful examples of nearly all the Smith Premier and L.C. Smith models, including the Remington-produced Smith Premier No. 10, the only front-strike double-keyboard machine ever made. In 1926 L.C. Smith merged with the Corona Typewriter Company of Groton, which specialized in portables, and the company prospered as it branched off into machines sold for personal use.

The folding Corona, light and rugged, was popular with journalists. With the merger, Smith-Corona managed to ride out the worst of the Depression by marketing typewriters for typists at home and in college.

The company shrewdly realized that consumers wanted machines in decorator colors. Hawxhurst has many portables produced in different color schemes, including a special “college” Corona designed for students at Northwestern University.

Hawxhurst originally saw his collection of typewriters, advertisements and related paraphernalia as a display in his place of business. As things transpired, his real estate office is now in his residence — as are the typewriters. “I’m the only one who gets to see them,” he says.

And he’s decided it’s time to sell. “My desire is to find a proper home for the collection, preferably in Central New York,” Hawxhurst says. Ideally, he’d like to see the collection displayed intact in Syracuse, Groton or Cortland, the site of the last Smith-Corona factory.

Hawxhurst has searched for a local business or institution willing to take on the collection, but “it’s a very slow process.” Syracuse University offered a likely prospect, since L.C. Smith founded the SU School of Engineering. Armory Square’s Museum of Science and Technology (MOST) would also make an ideal home for a technological collection directly related to Syracuse history. Institutional boards and committees, however, often take years to reach a decision on such matters.

Hawxhurst recently posted the collection on Craigslist, hoping to attract the attention of any person, business or institution with the means to display it. He would be happy to loan out the collection for public display, he says, until a permanent home can be found. Anyone interested in the collection can contact Hawxhurst at [email protected]

“The Smith-Corona story should be a source of pride and inspiration for Central New Yorkers,” Hawxhurst says. “As one of the biggest, longest-lived, and most innovative typewriter companies in the world, Smith-Corona demonstrates what can be achieved with ingenuity, hard work and determination — right here in Syracuse.”