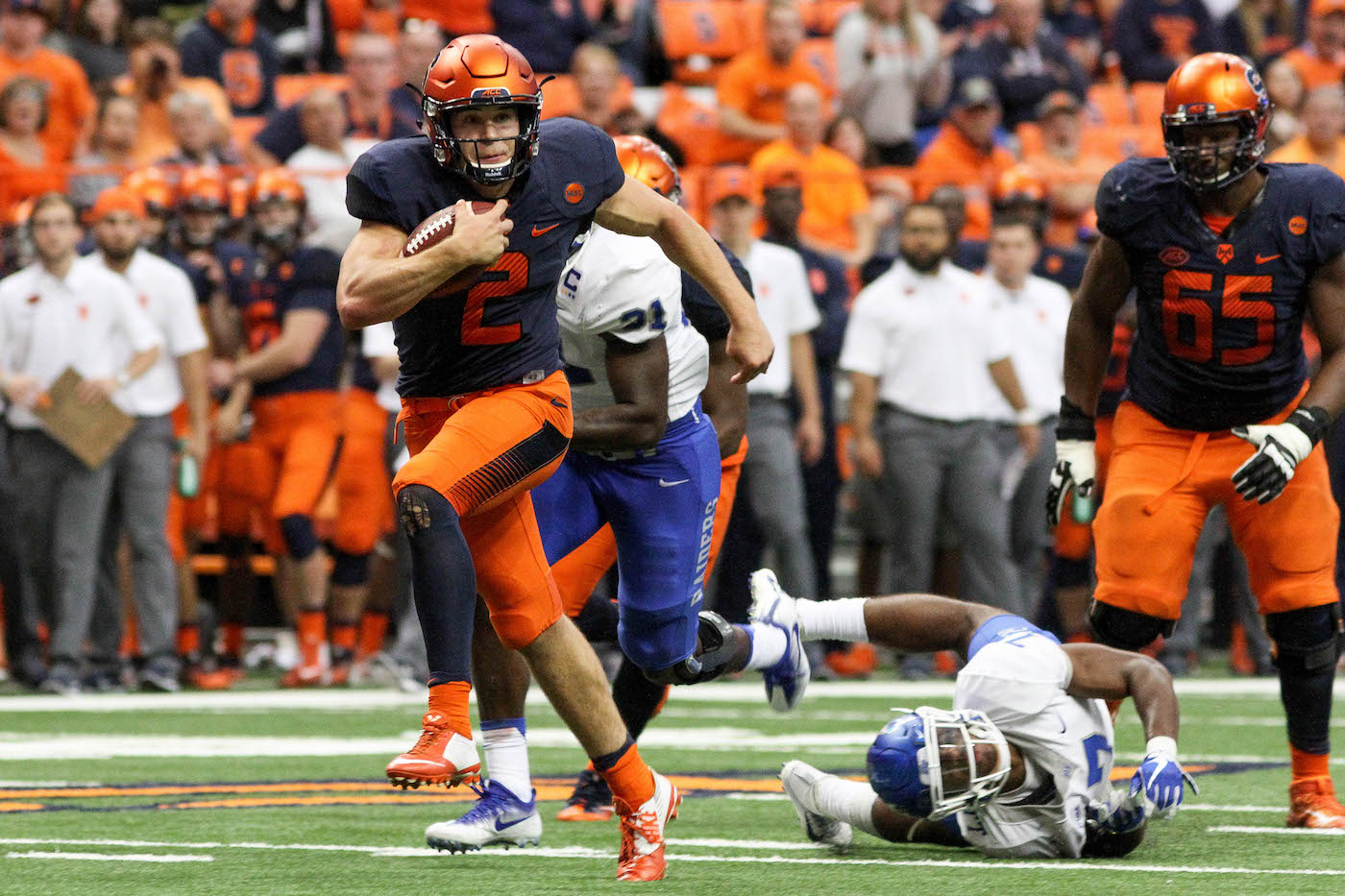 In the second week of Coach Dino Babers’ second year, the Orange seemingly took a huge step backward Sept. 9 with an incredibly frustrating 30-23 loss to Conference USA-member Middle Tennessee State in the “Scott Shafer Bowl” before a paltry crowd of 29,731 at the Carrier Dome.

While the Orange offense repeatedly came up short against Middle Tennessee defensive coordinator and former SU coach Scott Shafer’s attacking defense, the Orange defense allowed three touchdown passes in a 12-minute span in the third and fourth quarters that lifted the Blue Raiders to the upset win. 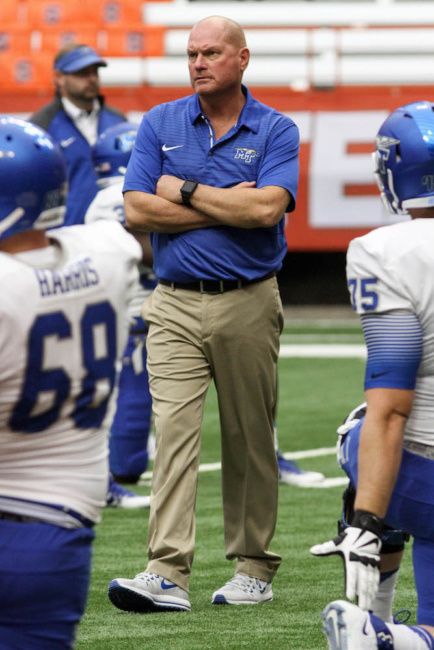 It’s hard to see the big picture when the little picture looks like it was scribbled outside the lines by a kindergartener. But clearly, turning SU into a perennial bowl-eligible team is a long-term project that will require patience and trust that Babers is the right coach for the job.

If you think about it in terms of recruiting, it’ll take Babers six years to field a team with seniors that he recruited. Hired to replace Shafer after the 2015 season, Babers played last season with Shafer’s recruits and didn’t get a full recruiting class until this past offseason. Many freshmen sit out a year as a redshirt, so most of the players in Babers’ first true recruiting class won’t play as seniors until 2021.

That said, this is not the 1980s and it remains to be seen how much rope SU will give Babers, who compiled a 37-16 record in a combined four years at Eastern Illinois and Bowling Green before moving to Syracuse. For this season, the loss to Middle Tennessee was devastating because most fans figured the Orange would start 3-0 against Central Connecticut State, Middle Tennessee and Central Michigan, and then maybe find three more wins in the Atlantic Coast Conference to finish with a bowl-eligible 6-6 record.

For his part, Babers fell on his sword following the Middle Tennessee game. “There’s nobody to blame but myself. It’s my job to get them ready, and they weren’t ready,” Babers said. “We didn’t handle the emotional rollercoaster of all the stuff that was brought into this game. And all the blame should be put right here.”

“All that stuff,” apparently, was the return of Shafer, who had recruited many of SU’s current players and was canned after 3-9 and 4-8 seasons in 2014 and 2015. The defensive coordinator under previous coach Doug Marrone, Shafer made questionable decisions as the head coach. Who can forget quarterback Eric Dungey suffering a season-ending concussion in a blowout loss to Louisville and Shafer saying he didn’t remove Dungey because he thought the Orange still had a chance to win the game?

But Shafer was popular with his players, who carried him off the field after the Orange defeated Boston College on a last-second field goal in the last game of the 2015 season–and Shafer’s last game as SU’s coach.

Taking advantage of Syracuse’s young and inexperienced offensive line, Shafer’s attacking defense limited Dungey to 180 passing yards and no touchdowns and the Blue Raiders sacked Dungey and backup Zack Mahoney six times. Mahoney finished a series in the third quarter after Dungey was temporarily knocked out of the game on an illegal hit by Middle Tennessee defensive end Walter Brady, who was flagged for a roughing-the-passer penalty and ejected.

“Coach Shafer is a genius and he always comes up with something,” Dungey said. “He gave us something that we haven’t seen before, a bunch of different disguises, so props to Coach Shafer.”

Following the game, Shafer received a game ball and broke out a victory cigar he had been saving since he learned Middle Tennessee would be visiting the Dome this season. While Shafer said after the game that it was “bittersweet” because of his relationship with many of SU’s players, he clearly wanted to win against a school that he felt didn’t give him a fair shake. 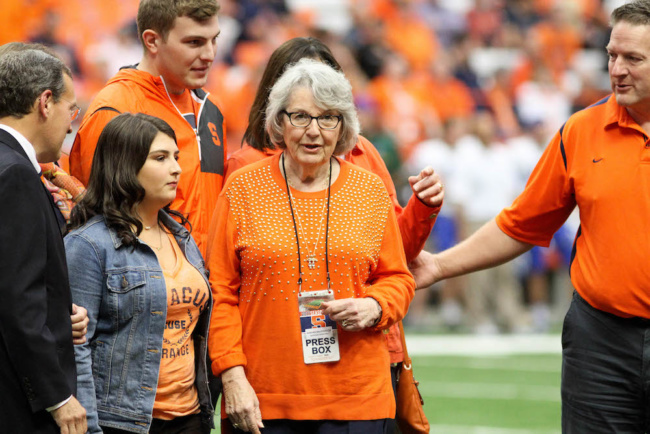 The wife of late Syracuse University football coach Dick MacPherson during a tribute for her husband. Michael Davis photo

“He also told us, before the game, that if we win we’ll be best friends for life,” Middle Tennessee linebacker D.J. Sanders said. “So it looks like I’ve got a best friend for life now.”

The game was likely lost in the first half, when the Orange couldn’t take advantage of three Middle Tennessee turnovers and scored only 16 points despite moving inside the Blue Raiders’ 10-yard-line four times. SU led 16-9 at the half, but the frustrations mounted in the second half as Orange punt returner Sean Riley’s fumble on a fair catch led to Middle Tennessee’s game-tying touchdown, Blue Raiders quarterback Brent Stockstill started to pick apart SU’s secondary, and Middle Tennessee cornerback Reed Blankenship made a diving interception at the Blue Raiders’ 24-yard line to thwart the Orange’s second-to-last drive.

SU’s final drive — which included the most egregious of the Middle Tennessee fake injuries to slow down the Orange offense — ended with Dungey’s 14-yard pass to Steve Ishmael on fourth-and-15 as Dungey and Ishmael both argued that Ishmael had caught the ball at the first-down marker before getting pushed back. The fake injury occurred midway through that drive as a Middle Tennessee cornerback fell to the ground clutching his ankle when he realized a teammate wasn’t going to get off the field before the ball was snapped.

“At times, we played well enough to win,” Orange senior linebacker Zaire Franklin said, “and at other times, we made a lot of silly mistakes.”

Franklin said he understands why fans might feel the season is over, but the players don’t feel that way.

“I mean, there’s no panic in the team. We’re extremely disappointed, I think you can see it in Eric’s face. I think he’s more disappointed than anybody else,” Franklin said of Dungey. “But at the same time, one game is not going to define us. We’ve got 10 more and it’s all about getting back on track, getting a win in the Dome and moving on with our schedule.”

To that end, the Orange will face a Central Michigan team that’s 2-0 after beating Kansas 45-27 Sept. 9 at Kansas. The Chippewas, who were picked to finish fifth in Mid-American Conference’s six-team West Division, took Syracuse into overtime at the Dome in 2015 before losing 30-27.

Babers said he’s looking for his team to respond the way Virginia Tech did last year after the Orange upset the Hokies at the Dome. Virginia Tech bounced back to win the ACC’s Coastal Division and defeat Arkansas in a bowl game.

“First thing, we need to go back and re-examine ourselves tomorrow,” Babers said after the game. “It has to be an honest evaluation. These young men, sometimes you look at them and you tell them the truth, and sometimes they believe you and sometimes they don’t. I guarantee all 104 of them will believe tomorrow, and with that belief we have the opportunity to get better.”

Do you believe? Unfortunately, that’s a question that may take years to answer.

SU will play Central Michigan in its third consecutive home game on Saturday, Sept. 16, 3:30 p.m., at the Carrier Dome (TV on ACC Network Extra). Tickets starting at $25 are on sale now online at Cuse.com/tickets, by phone at (888) DOME-TIX and at the Carrier Dome Box Office (Gate B).