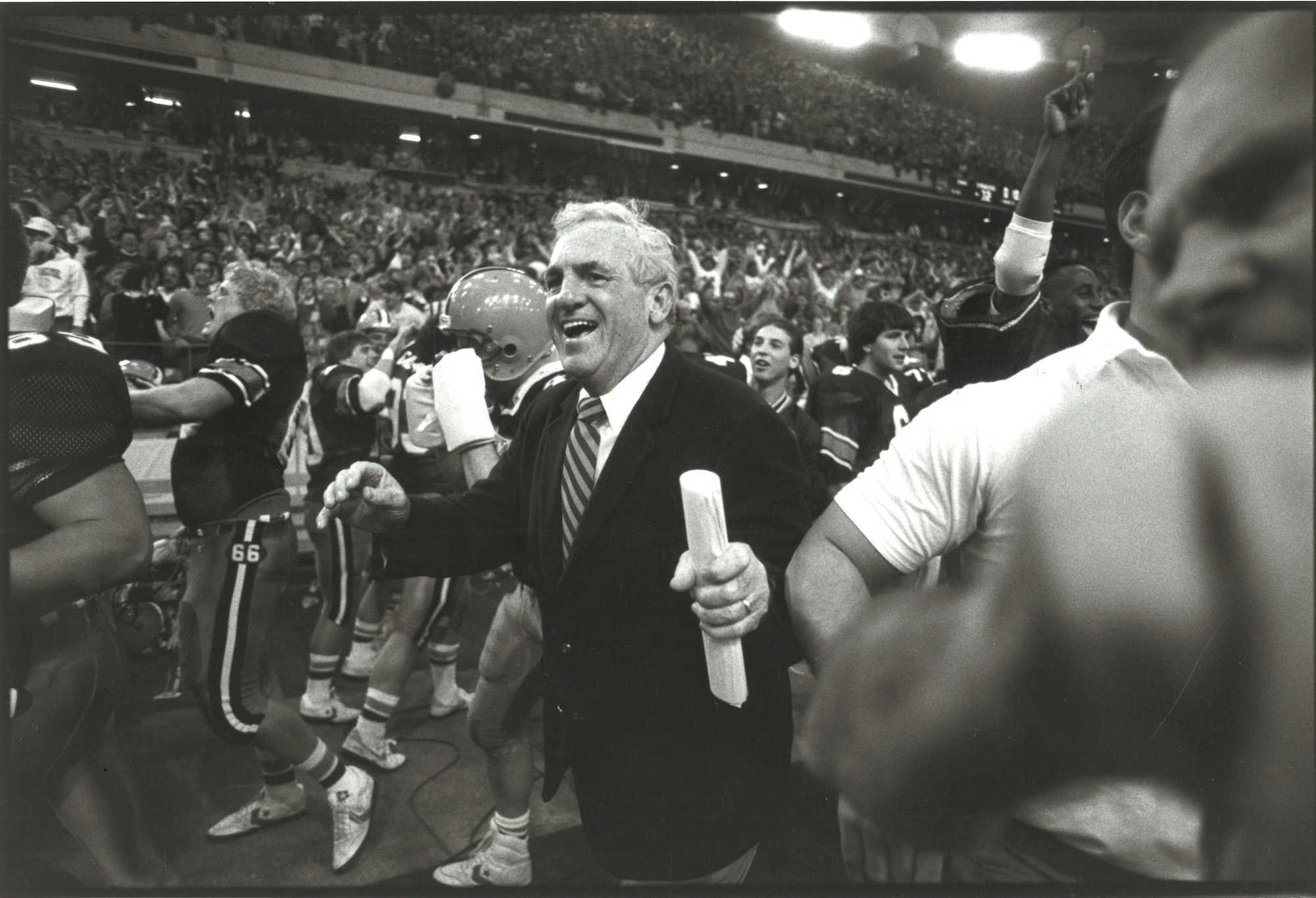 SU will honor the late Dick MacPherson and his undefeated 1987 team this Saturday.

Anyone who has followed Syracuse University football since the 1980s knows there’s only one “Coach Mac.”

This Saturday, Sept. 9, Syracuse will commemorate beloved coach Dick MacPherson’s signature accomplishment when it recognizes the 30th anniversary of Coach Mac’s undefeated 1987 team. Captains Don McPherson and Paul Frase and many other members of that team will return to the Carrier Dome for the festivities, which will most certainly include a tribute to MacPherson, who died Aug. 8 at age 86.

Against this celebratory background, the 2017 Orange will play its second game of the season at 3:30 p.m. against Middle Tennessee State University. And while Syracuse fans know there’s only one Coach Mac, they’re wondering if current coach Dino Babers can be the one who finally duplicates Mac’s achievement of returning Syracuse football to national prominence. 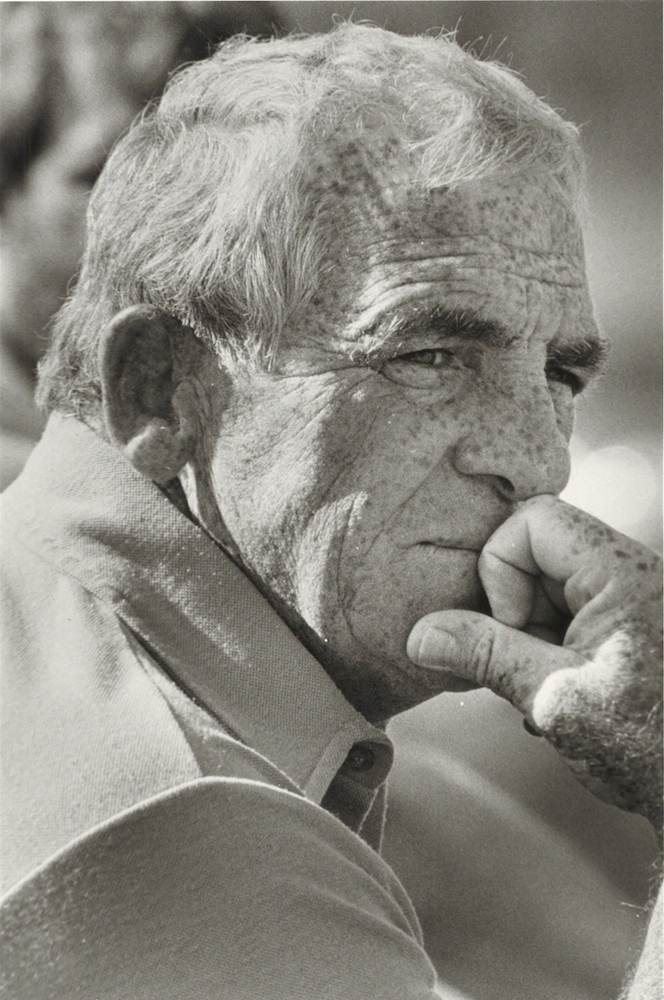 The jury is still out on Babers, who’s in his second year at Syracuse after successful stints at Eastern Illinois and Bowling Green. Babers’ first squad in 2016 finished 4-8; that’s the same record as 2015 under embattled coach Scott Shafer.

Shafer, by the way, is the defensive coordinator at Middle Tennessee. Think he’s not fired up for Saturday’s game?

Babers’ reputation has been built on high-powered, fast-paced offenses. But the 2016 Orange scored less than the 2015 team (25.7 to 27.2 points per game), and the 2016 squad allowed more points, too (38.6 to 31.0). The Orange opened this season with a 50-7 rout of Football Championship Subdivision-member Central Connecticut State Sept. 1 at the Dome.

It takes time for players to absorb the nuances of Babers’ offense and for his coaching staff to recruit the players he wants for his system. At Eastern Illinois and Bowling Green, Babers’ offenses started to click around the fourth game of the second season and they became among the most explosive offenses in the nation.

Syracuse’s fourth game this season is against traditional national powerhouse Louisiana State University, which entered this season ranked No. 13 in the AP Poll. And therein lies the difficulty of Babers’ task for Season No. 2 as the Orange plays one of the most difficult schedules in the nation. Syracuse will face five teams ranked in the preseason Top 20: No. 3 Florida State; No. 5 Clemson; LSU; No. 16 Louisville; and No. 18 Miami. And all 11 of Syracuse’s Football Bowl Subdivision opponents starting with Middle Tennessee appeared in a bowl game last season.

SU’s schedule isn’t going to get much easier in the future as the Orange plays in the Atlantic Coast Conference’s Coastal Division with Clemson, Florida State and Louisville. SU faced a similar uphill climb in the early 1980s as MacPherson’s teams went 4-6-1, 2-9, 6-5, 6-5, 7-5 and 8-6 before the breakthrough 1987 season.

It’s worth noting that Babers did have a Mac-like moment last season, when the Orange upset No. 17 Virginia Tech 31-17 at the Dome. Although not quite as shocking, it did bring back memories of Syracuse’s 17-9 upset of No. 1 Nebraska in 1984 at the Dome. And, when we look back 10 years from now, we may remember that win and Babers’ epic “Whose house? Our house” post-game locker room speech that was captured by ESPN as the moment when Syracuse started lifting the cloud that had hovered over the program since MacPherson’s successor, Paul Pasqualoni, was fired after the 2004 season.

From Coach to Legend

It was certainly a different time in the 1980s and you wonder if MacPherson, with a 12-20-1 record after three seasons, would have been a given a fourth year if that happened in this what-have-you-done-for-me-lately era. The win over Nebraska came in the fourth game of his fourth season, and the Orange went 47-25-3 during the rest of MacPherson’s 10-year tenure before he left to coach the NFL’s New England Patriots.

In 1987, with McPherson as his quarterback, Coach Mac led the Orange to the second undefeated season in program history. (The first, in 1959, resulted in Syracuse’s first and only national championship.) The 1987 team went 11-0 in the regular season and tied Auburn 16-16 in the Sugar Bowl as Tigers coach Pat Dye opted for a 30-yard field goal on the last play of the game rather than going for the win. 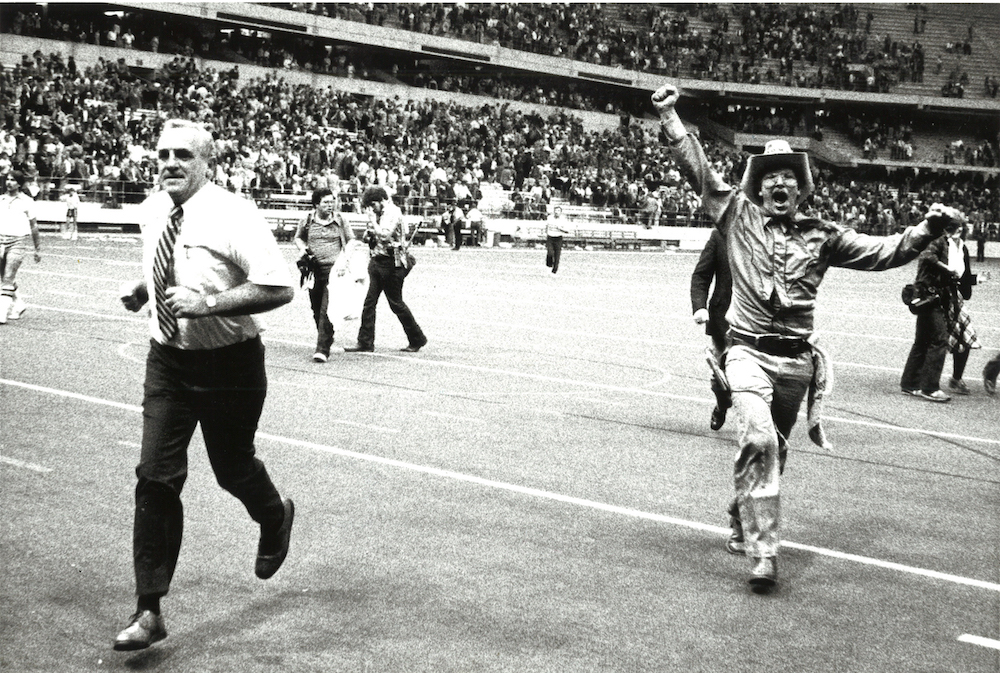 Dye’s decision stood in stark contrast to MacPherson’s decision just weeks earlier to go for the 2-point conversion rather than settling for a tie in the Orange’s final regular-season game against West Virginia at the Dome. Michael Owens carried an option pitch from McPherson into the end zone to give the Orange a 32-31 win that elevated MacPherson to legendary status in this community and beyond.

MacPherson was the consensus pick for national coach of the year in 1987, earning the recognition from 12 different organizations. Syracuse was ranked fourth in the final AP poll, its highest end-of-season ranking since 1959.

The Orange went 10-2 and finished 13th in 1988, and in MacPherson’s final three seasons Syracuse recorded bowl wins over LSU, Georgia and Arizona. He left Syracuse with a 66-46-4 record, including 3-1-1 in bowl games, and was inducted into the College Football Hall of Fame in 2009.

To honor MacPherson, the 2017 players are wearing a blue patch with “Mac” inscribed in Orange on their jerseys and that same design is displayed at the 25-yard lines on Ernie Davis Field at the Dome.

“Our university and community will remember Coach Mac forever,” said SU director of athletics John Wildhack. “His legacy will live on in every person who had the opportunity to meet him or be in his presence. The patch on our uniforms and on the Carrier Dome field is a tribute to the lasting impact he had on Syracuse University.”

One of Servais’ offensive line coaches is graduate assistant coach Macky MacPherson, a former SU center and Coach Mac’s grandson. “I know,” Servais said of Macky, “that he’s a really great coach and a better guy.”

Just like his grandfather, who returned to Syracuse after retiring from coaching and worked as a radio analyst for Syracuse football games while continuing to make a positive impact throughout the community as the rare celebrity who exhibited warmth and a friendly sense of humor to everyone he met.

Syracuse sophomore running back Moe Neal said he hopes the Orange puts on a good show Saturday for the fans and the returning members of the 1987 team.

“It’ll be great to impress those guys,” Neal said. “I know we’re going to come out with a great attitude and Coach Shafer’s coming back to town, so it’s going to be a good game.”

The first goal of Babers’ rebuilding process is a .500 record and a bowl game. If the Orange is going to have a chance this season, it needs to start 3-0 against Central Connecticut, Middle Tennessee and Central Michigan — all at the Dome. After that, the Orange will need to find three wins among North Carolina State on the road and Pittsburgh, Wake Forest and Boston College at home, unless SU can pull off another major upset against one of the ranked teams.

Middle Tennessee, which plays in Conference USA, finished 8-5 last season and ranked 12th in the nation in scoring (39.7 points per game) while averaging 517.7 yards per game. But the Blue Raiders lost their opener 28-6 to Vanderbilt as the offense sputtered and Shafer’s defense allowed Commodores quarterback Kyle Shurmur to throw for 296 yards and three touchdowns. 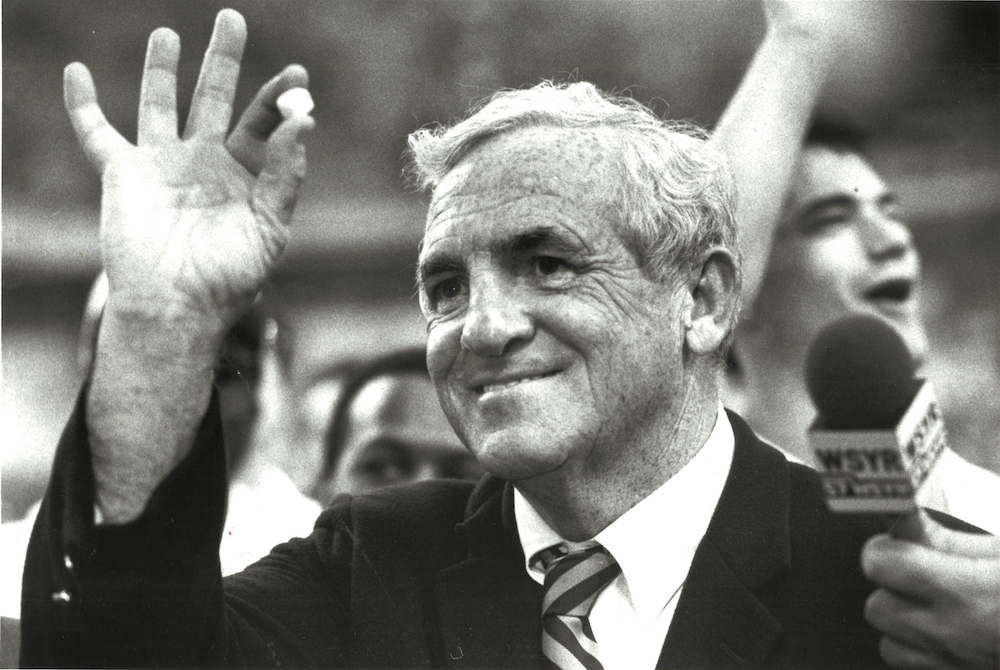 Coach MacPherson displays a sugar cube in November 1987 after his undefeated team received an invitation to play the Sugar Bowl. Michael Davis photo

Junior quarterback Eric Dungey remains Syracuse’s most dynamic player as he accounted for five touchdowns and 379 total yards in the romp over Central Connecticut. Dungey completed 28 of 36 passes for 328 yards and three touchdowns, and rushed for a team-high 51 yards on nine carries with two touchdowns.

“It’s amazing to see the growth in people, especially Dungey,” said senior wide receiver Steve Ishmael, who caught 12 passes for 134 yards against Central Connecticut. “Freshman year, he came in and he was petite. He was skinny. Now, he is huge, he’s a big guy. Sometimes I get jealous looking at him.

“It’s been great just playing with him and having him be my quarterback,” Ishmael said. “He’s consistent. Hopefully we make a bowl game this year and just keep on pushing forward.”

For that to happen, Dungey will have to stay on the field. That has been a problem as he has missed seven games the past two seasons because of injuries. Dungey plays with the reckless abandon of a kid on the playground, and he was at it again against Central Connecticut.

Babers said Dungey plays better that way, so it’s a fine line between letting him do his thing and trying to keep him from taking the big hits that lead to injuries.

“I hope it’s out of his system,” Babers said. “I kind of went up to him, ‘Are you done? Have you got it out of your system? A whole season’s worth?’ He just needs to be smart. Obviously, it’s very difficult to change when it comes to that stuff. That’s kind of who he is.”

Dungey said he is being smart; we’re just not recognizing it. “I just try to get as many yards as I can (and) trying to be smart at the same time,” he said. “It’s different taking a hit from a 290-pound (defensive) end rather than a (lighter) cornerback.”

Dungey’s 300-yard passing game was the seventh of his career, tying Ryan Nassib for the most in school history. After spending three years with the New York Giants, Nassib joined the New Orleans Saints and was cut at the end of training camp.

“It’s awesome. I have nothing but respect for Ryan Nassib,” Dungey said. “His picture is in the weight room so I’m always looking up at that. It’s kind of some motivation and he’s a great guy. From Syracuse football, he’s about the only guy I knew. I’m from Oregon so I didn’t know much about Syracuse, but it’s awesome.”

There were a few red flags from the lopsided opening win: The Syracuse offensive and defensive lines failed to dominate their counterparts from an FCS team that finished 2-9 last season and was picked to finish fourth in the Northeast Conference. The Orange running backs ran for 104 yards on 31 carries (an average of 3.4 yards per carry), and the defense did not record any sacks until garbage time, although it did limit the Blue Devils to just 167 total yards.

Also, Syracuse redshirt junior safety Antwan Cordy left the game in the first quarter and returned on crutches and wearing a boot on his right foot. No announcement had been made regarding the extent of the injury as of Sunday.

Cordy suffered a season-ending injury in the second game last year and the Orange defense was never the same. SU has more defensive backfield depth this year, but losing Cordy for an extended period would still be a huge loss.

Overall, the Orange remains a team in transition as it continues to field a mix of Babers’ and Shafer’s recruits. While fans are hoping that Babers can somehow build the program to a Mac-like 1987 level, he’s focused on this week and looking for signs that his team is figuring out his system. When that comes, he believes the success and bowl games will follow.

“Overall, I thought it was a good, solid game. Football teams grow the most during their first and second games,” Babers said. “We’re looking for a lot of growth coming into our next game vs. Middle Tennessee.”

Tickets starting at $25 are available for Saturday’s game against Middle Tennessee online at Cuse.com/tickets, by phone at (888) DOMETIX, at Destiny USA kiosks and at the Carrier Dome Box Office (Gate B).