“I really look forward to the challenge ahead.”

Syracuse University football coach Scott Shafer believes there’s no obstacle that can’t be overcome with old-fashioned determination and sheer will.

But when you’re the captain of the Titanic and the icebergs are right in front of you, there’s no amount of determination and sheer will that’s going to save you.

That’s what the Orange, losers of three consecutive games, face Saturday when defending national champion Florida State visits the Carrier Dome in a noon game that will be televised nationally by ESPN. The 5-0 Seminoles, who own the nation’s longest winning streak at 21 games, are ranked No. 1 in the country in the Associated Press and Coaches polls. 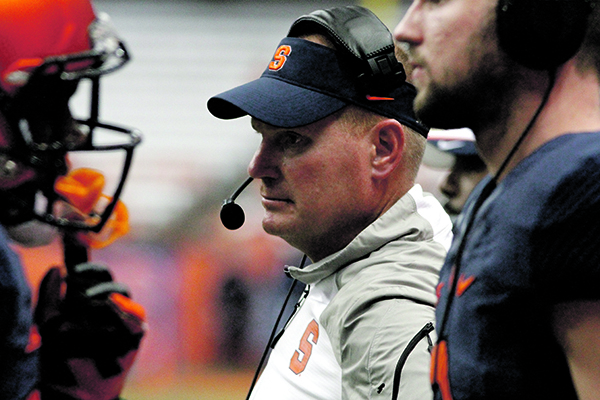 “It’ll be a great opportunity for our kids to look at this opportunity heading into the Florida State game knowing we’ll be major underdogs,” Shafer said.
Michael Davis Photo | Syracuse New Times

“Challenge” is putting it mildly. In its past three games, SU outgained Maryland by 220 yards and still lost by 14; forced five turnovers by Notre Dame and still lost by 16; and committed a season’s worth of mental and physical mistakes in a 28-6 loss to Louisville this past Friday night at the Dome.

Oh, and if that’s not enough, the Orange may not have the services of starting quarterback Terrel Hunt, who left the Louisville game in the fourth quarter with a lower body injury. Hunt’s status was still up in the air early in the week.

Hunt’s backup is sophomore Austin Wilson, who played admirably in relief of Hunt in SU’s season-opening, double-overtime win against Villanova. But that was Villanova, and this is Florida State. Wilson is not nearly as mobile as Hunt, and mobility is a must against the lightning-fast Florida State defenders.

So exactly how is the Orange going to meet this challenge?

“We’ll fight our butts off and force ourselves to be men and young men,” Shafer said. “We’ll work hard and rely on one another. We don’t listen to anything on the outside; we call it the noise. We’ll fight like a good family would fight to get back to where they want to be.”

For starters, the Orange needs to stop shooting itself in the foot, particularly in the red zone. In one excruciating sequence in the third quarter of the Louisville game, the Orange had a first-and-goal at 1-yard line. The next four plays: 3-yard loss, ineligible receiver penalty, holding penalty, and dropped pass in the end zone. The result: a 24-yard field goal that represented SU’s final points of the game.

“It starts in practice,” running back Prince-Tyson Gulley said. “We’ve got to practice like we want to win.”

Certainly the Orange should not lack motivation, because no one is going to give SU a chance to beat Florida State.

“We’re not worrying about what they’re saying in Tallahassee (where Florida State is located) or on the blogs or anything,” Orange nose tackle Wayne Williams said. “We’re worried about what is in our (locker) room. Anything can happen, just like in the N.C. State game.”

Williams was referring to Florida State’s win over North Carolina State on Sept. 27, when the underdog Wolfpack led 38-28 late in the third quarter before falling 56-41.

We know anything can happen, but the only guarantee after watching the first five weeks of this season is that SU will not give up – even when the icebergs are just inches away.
“I hate to lose, it makes me sick to my stomach,” Shafer said. “But we’ll fight our butts off to get to where we want to be, I promise you that.” [SNT]
Matt Michael is a freelance writer based in Syracuse. Email him at [email protected]

Interview: Pavel Baev
Emergency? With Your Money, The Governor Has That Covered
To Top