The ArtRage Gallery photography exhibit Selma to Montgomery March at 50 pivots on three 1965 civil rights marches that played a key role in influencing Congress to pass the Voting Rights Act. Matt Herron’s images not only discuss that larger narrative but also tell stories of everyday people demonstrating for political and human rights.

The exhibit also makes other linkages. It presents photos of 25 Syracusans who took part in various civil rights events. And it interfaces with a show at SUNY Oswego’s Metro Center in downtown Syracuse and Syracuse Stage’s upcoming play Sizwe Banzi Is Dead. ArtRage has joined with the other two groups for “Race Place Being,” a multi-site series encompassing art, theater, film and lectures.

Many of Herron’s photos outline three marches from Selma to Montgomery, two of which were repelled by local and state police. The third ended successfully at the state capitol, and a long-view image portrays marchers at the end of their journey. Dr. Martin Luther King and Ralph Abernathy, both of the Southern Christian Leadership Conference, are in the forefront of the crowd, and so is Bayard Rustin, a skilled organizer who planned the 1963 march on Washington, D.C.. 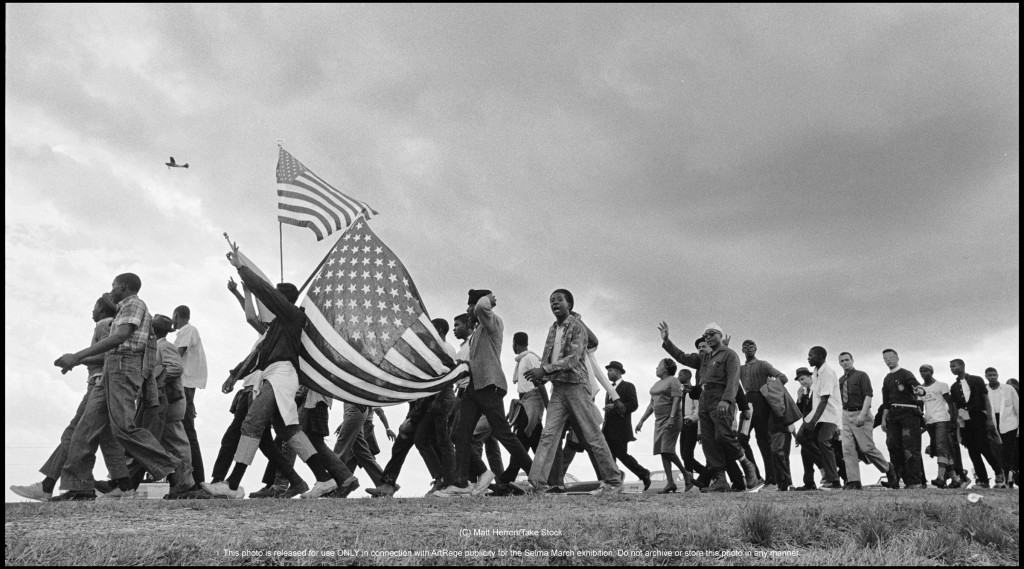 The Selma to Montgomery March for voting rights was the largest and most significant march of civil rights history. Here marchers and flags cross the horizon. In the air, a US Army reconnisance plane on the lookout for threats to the march.

King appears in other photos at the gallery, including one in a banner format. He’s at a podium, and his image is sharp and large while the microphones are faint, seemingly fading into the mists of history.

Another set of images features people we’ve never heard of. Samuel Newell, an 8-year-old child, holds a sign calling for voter registration before being arrested and jailed. Marcher Doris Wilson, age 20, has her blistered feet treated by Dr. June Finer. Because of her support for voting rights, Wilson was fired from a job in a school lunchroom.

Herron’s work also deals with the 50-mile march in a physical and communal context. There are photos detailing small moments: Wilson’s shoes totally worn down; a man playing guitar; people walking in the rain; and a young man, with zinc oxide dabbed on his face, who has written the word “vote” in the cream. One incisive, emotional image portrays a group of African Americans celebrating at roadside.

The final march came after months of turmoil with more than 3,000 people jailed for taking part in a voter registration campaign, 17 hospitalized after March 7, 1965, known as “Bloody Sunday,” and three people killed. 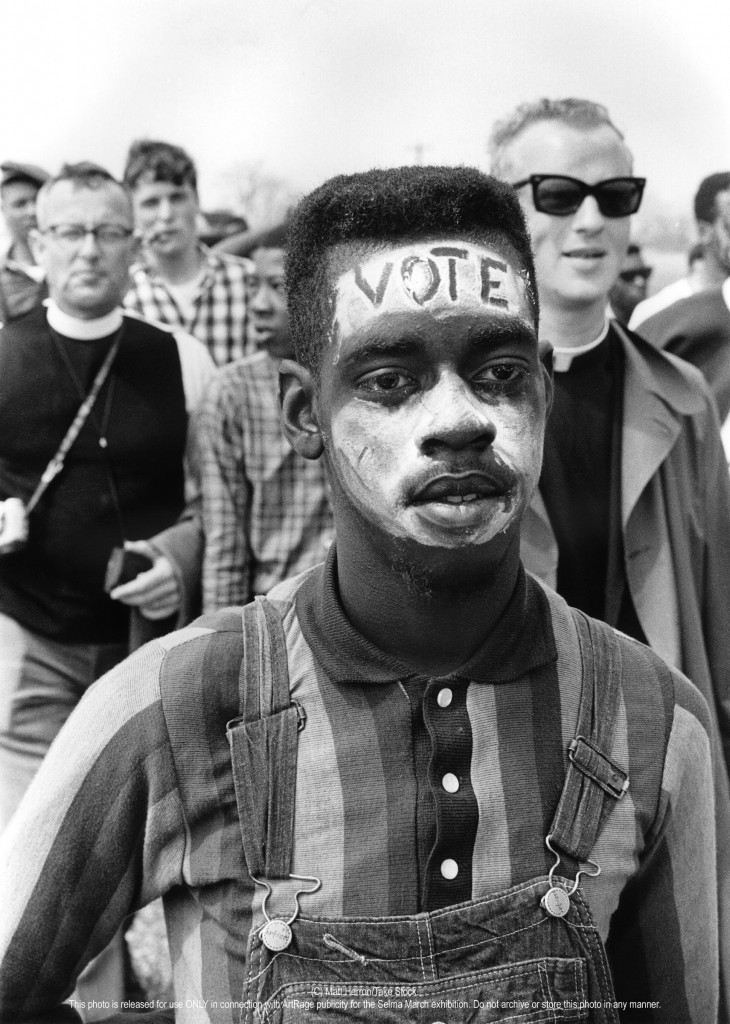 A smaller segment of the exhibition accesses images Herron took in Mississippi. He photographed African Americans filling out voter registration forms in Hattiesburg and waiting in line at the office of the Holmes County circuit clerk. Two other photos convey a radical transition. In the first, taken in 1965, C.O. Chinn Jr. urges people in Canton, Miss., to register to vote. In the second, shot 26 years later, he works as a municipal court judge in the same town.

Herron was a volunteer photographer for the Student Non-Violent Coordinating Committee and coordinated the Southern Documentary Project involving himself and five other photographers. They spent months documenting scenes ranging from the Selma marches to the Mississippi Freedom Delegation’s struggle to be seated at the 1964 Democratic Convention. He’s the author of the 2014 book MIssissippi Eyes: The Story and Photography of the Southern Documentary Project.

In addition to Herron’s photos, ArtRage is displaying images of Syracusans who participated in varied civil rights actions, among them the final Selma march; demonstrations against the demolition of much of Syracuse’s 15th Ward in 1963 and 1964; and a 1961 Freedom Ride through several Southern states. Those portrayed include Akosua Valerie Woods, Delores and John Brule, Pastor Roosevelt Baums, and the Rev. Leroy Glenn Wright. 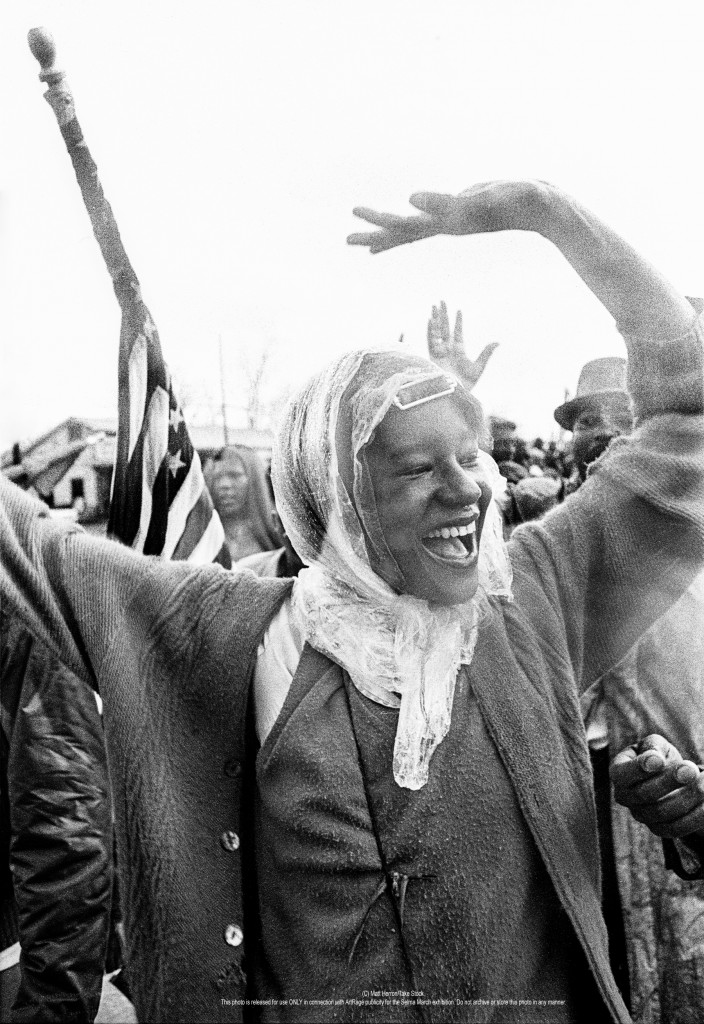 Twenty-year-old Doris Wilson of Selma celebrating. “I’m walking for my freedom.” She was fired from her $12/week job in a school lunchroom for taking part in voter demonstrations. She and three siblings went to jail, and her father was removed from the welfare rolls.

The exhibition is just one of several presentations happening over the next month. On Thursday, Feb. 19, 5 to 8 p.m., the SUNY Oswego Metro Center, located in the Atrium on Clinton Square, will host a reception for Apartheid and Identity: Race Place Being, a multi-media show featuring photos, sculptures and quilted pieces discussing the Soweto uprising and other events in South Africa. The exhibit runs through March 28.

Theatrical productions will happen at ArtRage, the venue for Steady, a Selma anniversary drama conceived and directed by Ryan Hope Travis, has 7:30 p.m. performances on Friday, Feb. 20, and Saturday, Feb. 21, and Syracuse Stage, where Sizwe Banzi Is Dead, premiering Wednesday, Feb. 25, concerns a black man who struggles with oppressive work rules in South Africa during the apartheid era.

Other events include storyteller Natalie Daise’s one-woman show, ” Becoming Harriet Tubman,” at SUNY Oswego’s main campus on March 3 and 4; a panel discussion, “Civil Rights Moving Forward,” at ArtRage on March 19; and an artist talk by Herron at the gallery on March 25. The overall series is intended to evoke history, to compare movements for change in America and South Africa, and to provoke discussion of race and identity in the current-day United States.

What is Good Public Art?
“Illuminating” a City Through Public Art
To Top