Give Jeff Back His Hair!

As I watched the Bruce Jenner interview, I felt happy for him. Finally, Jenner can be the person he knew he always was. I only wish he’d outed himself as a transgender person sooner, for his sake and the sake of others.

And now, inspired in part by Jenner’s courage, I come to a point in my journey where it’s time to be honest with myself — and with you. Deep inside me, at the very core of who I am, I am not bald. I am that same person who had a dense tower of dark, curly hair that drew comparisons to Elliott Gould’s majestic ’fro.

Everything changed one night in the 1980s. I was 28 years old and typing on deadline for a newspaper near Boston. A colleague, whose name I am omitting because I would never stoop to his level of pettiness, stood over me, looking down on my head, and gleefully exclaimed, “Kramer, you’re going bald!” It’s possible that Brian Sullivan, now a reporter with Bloomberg in Boston, also touched my scalp inappropriately.

My whole world — my whole follicle field, to be specific — fell apart. Ten years later, the hair on the sides of my head was growing laterally with almost no counterbalance on top, giving me the look of a deranged, probational circus clown. I had it all shaved off one St. Baldrick’s Day, the pediatric cancer fundraiser. Ever since, I’ve kept my hair extremely short, telling myself I look better bald, as if the whole world didn’t know that privilege is reserved only for Michael Jordan.

I was an empty eggshell of a man, my pain always near the surface.

On April 25, for example, I attended the premiere of Million Dollar Mayor, Roger Springfield’s fine documentary on Lee Alexander, the former mayor of Syracuse. I tried to concentrate on the big themes of the film: the web of corruption spun by Alexander, the tension between the good he did for the city and the darkness and greed that also defined his 16-year reign. But all I could think was: Dude had awesome hair.

And not just Alexander. Most of the sources Springfield used in the documentary still have their hair even though I am much younger. Alexander’s close friend, Jack Mannion — who is the husband of the current mayor — has his hair. So does Dick Case and even to an extent fellow Alexander-era scribe Neil Driscoll. And former state lawmaker Nancy Larraine Hoffmann. And Lee’s sons James and Matthew. Especially James. Gimme a freakin’ break. And former Mayor Roy Bernardi.

So, let’s call it fate — or a miracle. Right after the groundbreaking Bruce Jenner interview aired, I watched an even more important story from right here in Central New York by WSYR-Channel 9’s Rachel Polansky, who I predict will be treated most generously by the Pulitzer Prize board for her work on this issue. It was the first time I’d ever heard of FUE, or follicular unit extraction. 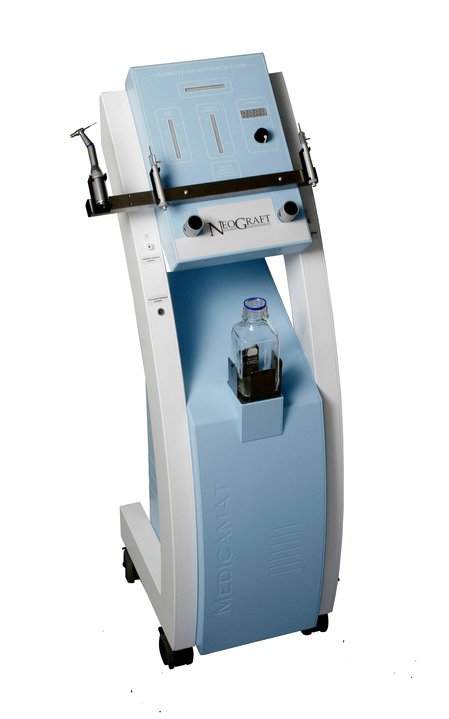 To summarize, there’s this guy in East Syracuse — Dr. Kim, a graduate of Berkeley and Harvard — who operates a machine called the NeoGraft that plucks individual follicles from hair-rich areas and replants them in denudement zones. No surgery or scars. Just selective harvesting of follicles from the back of the head, or perhaps, as my ever-helpful wife, Leigh, suggested, my ears or very lower back.

As the executor of my mother’s trust fund, I could pay for this procedure myself, but that raises a question: Is becoming unbald really worth risking hard time? I’m sure Lee Alexander would say “yes,” but my preference is to avoid prison where, sources tell me, satire isn’t highly valued.

Either way, by the time you read this, I will have arranged a consultation with The Great Dr. Kim. It’s time to tell male pattern baldness to go FUE itself.

The ancient Greek physician Hippocrates suffered from baldness. He prescribed himself a concoction that included opium (good), horseradish (less good) and pigeon droppings (bad).  No luck. He did, however, observe that eunuchs never went thin on top, and thereby correctly deduced that castration prevented baldness. (Thanks, History Channel!)