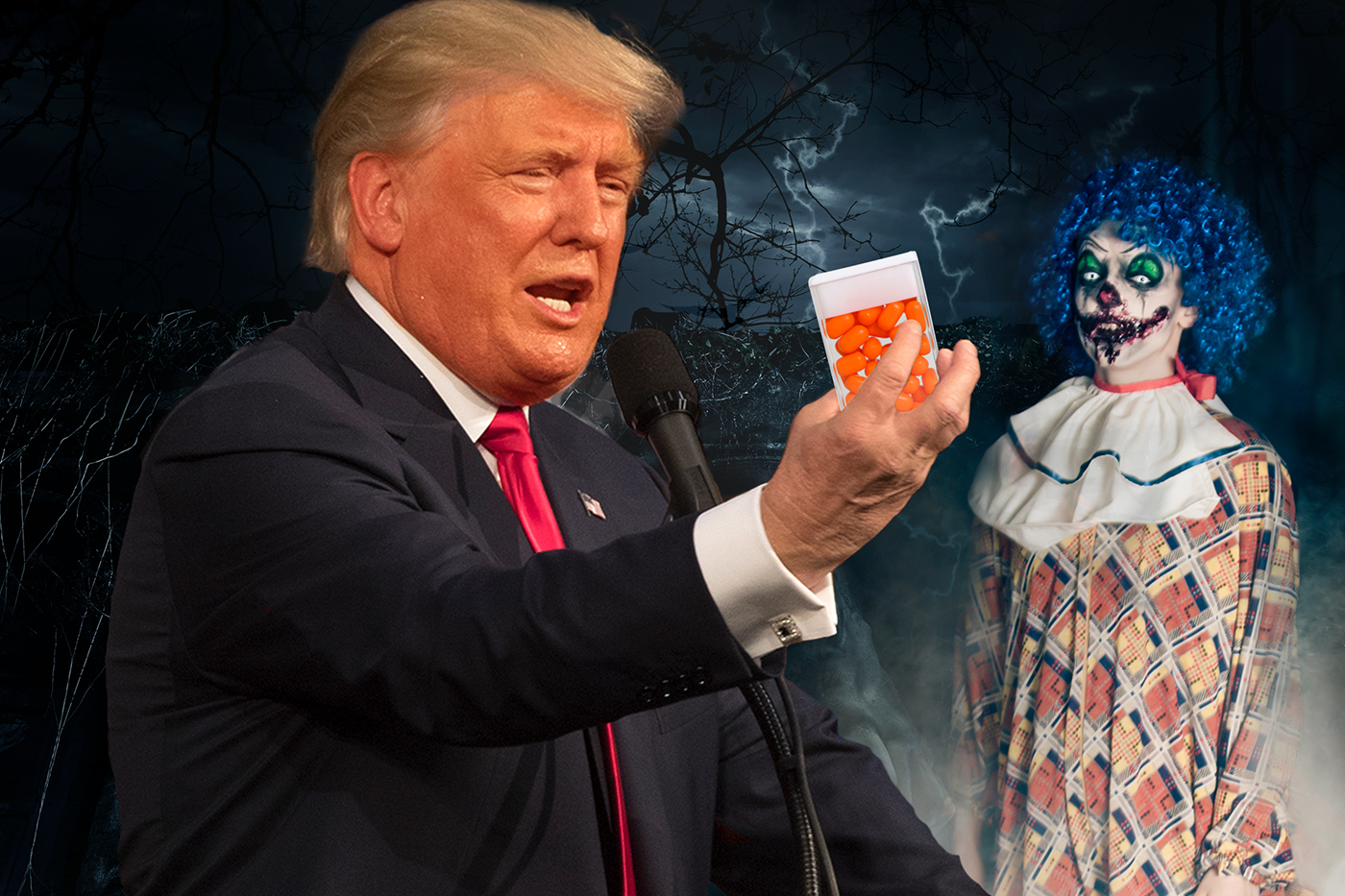 Trumping through Syracuse’s most spooktacular sites.

Well, hello there, and welcome to another version of Jeff Kramer’s spooktacular virtual haunted house. Or should I say … houses?

Yes, my pretties, you heard correctly. As a special treat this year, we’re offering multiple venues for the low price of six pints. Oh, stop whimpering. Just keep your arm extended while I jab around in search of a vein. Do excuse our lack of clean needle protocol. I’m new at this. Oh, my! You’re quite the bleeder, aren’t you? We’re going to need a bigger cistern.

OK, we’re all set. Just hold this filthy gauze patch on your arm as we set out by Uber cab to our first location, the recently shuttered Clark’s Ale House. What? You’re telling me that Syracuse doesn’t have Uber? Then we’ll just have to accept a ride from this fat orange crazy man named Donald. Don’t worry, he’ll take care of us.

And here we are, just as I promised. Why do you hesitate to enter the defunct roast beef sandwich

emporium? It didn’t survive the transplant from Armory Square to Salina Street, but it’s still a delightful place to grab …

Your genitals!!! Did someone just try to grab your genitals? Absolutely not. That. Did. Not. Happen. Here, can I offer you a Tic Tac?

No, don’t run off. And for goodness’ sake, don’t run into the old Sibley’s Department Store building. That’s now the endlessly delayed new Redhouse Arts Center and headquarters for Aspen Dental Management Inc. It’s not even an official haunted venue — only the tax breaks are official.

Oh, now look what you’ve done. Donald wants to play dentist. He wants to check your cavities. Your only choice is to open wide and — NO, DONALD, NO! No tongue-kissing the dental patients!

I do apologize for any violation of your personal space. Can I offer you another Tic Tac, maybe an orange one?

Let’s move on. Our next stop is the New Toxic Amphitheater. I hope you don’t mind a long walk in pitch-black dark through a gauntlet of carcinogenic substances. Why, look who’s on the stage! It’s Donald singing his own special version of a beloved Christmas song:

I’m dreaming of a White Nation

And no one thinks I’m doing blow.

What, you’re not enjoying the concert? OK, fine. Let’s head to Syracuse University for a stroll down the controversial University Place promenade, which was forced down the throats of …

Pray tell, what is that? Why, it’s one of those awful creepy clowns, and not just any creepy clown. It’s the incredibly short-term, former SU athletic director, Mark Coyle, who didn’t even stay in town long enough to get investigated by the NCAA.

What are you doing lurking in the shrubs, Mark Coyle? Go back to the University of Minnesota where you belong! And Donald, stop that goddamn sniffing. Use your imposing body language to “encourage” the creepy clown to return to Minnesota! That creepy clown was not properly vetted by Obama.

Now let’s proceed to Jamesville and the Glen Loch, which was once a serviceable and scenic restaurant and function space. Now look at it. It’s a partially demolished eyesore that makes the whole hamlet look like crap.

Uh oh. We can’t find one of the three partners who was supposed to develop the site. Yoo-hoo! Steve Hadley, come out, come out, wherever you are!

Donald, perhaps tomorrow you can come back here and erect a wall to keep the vermin out. We’ll make Pompey pay for it.

Stop! Do not flee into the night like a frightened child. Donald does not even appear naked in the film! It’s all perfectly artistic and respectful to women’s bodies. Here, have another Tic Tac. Come baaaaaaaaaaack.