Gene Maeroff, author of a book on Say Yes to Education, is concerned about the program’s future in Syracuse

“Unlike other locales where sparkling casinos and tax incentives for business represent the best hope for uplift, the gamble in Syracuse revolves around a hunch that sending its young people to college en masse will alter the city’s fortunes.”

That bet may be jeopardized, he fears, by the decision of the national Say Yes organization to shift some of its attention to starting up a Buffalo program before the Syracuse operation was on solid ground. Sitting in a coffee shop in Edison, N.J., where he lives and serves as president of that mid-sized city’s school board, Maeroff calls himself a “critical friend” of Say Yes.

“I’ve never said this before,” Maeroff told the Syracuse New Times, “and they didn’t ask me, but I think the move to Buffalo was premature. There was too much work still left to do in Syracuse.”

Say Yes announced in 2011 that it would begin a districtwide program in Buffalo, and began implementation there in 2012. While it maintains its offer of college tuition to Syracuse school students, its financial backing for support programs for Syracuse students has declined substantially.

Maeroff, who has probably studied the work of Say Yes to Education in Syracuse more than any other individual, says in a recently published book that while the outcome of the bet is still to be determined, he considers the fundamentals of the approach to be solidly research-based. In his 184-page study, Reforming a School System, Reviving a City (Palgrave Macmillan, 2013), Maeroff shares the results of an investigation that included multiple trips to the Salt City, including visits to classrooms and after-school programs, plus hundreds of interviews with Say Yes participants and leaders.

A grant from Cross and Joftus, a consulting company hired by Say Yes, paid for his research, but he insists that his work is independent and that he had final authority regarding what was published. He sees the potential of Say Yes as a game-changing program for Syracuse, while acknowledging serious flaws in its implementation. One thing is for sure, he says: It is too soon to know just how the bet will pay off. 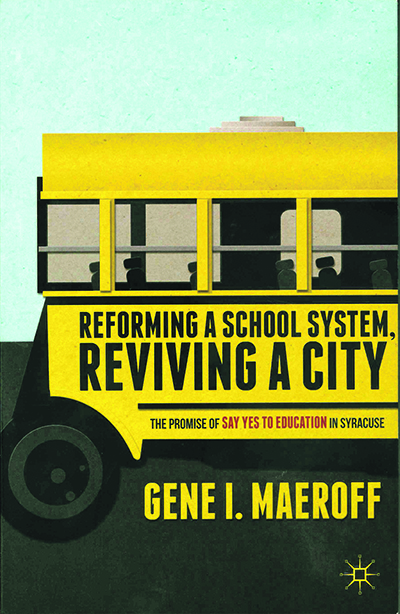 Maeroff blames many of the problems of Say Yes with flawed implementation and failures to communicate. “There were a lot of misunderstandings,” Maeroff told the Syracuse New Times, “and it is possible that it wasn’t stated as clearly as it should have been what they would do and not do. There is clearly a lot of anger in Syracuse at Say Yes and its role. People don’t understand that results are not instant. There will be long-term dividends, but some people early on may not reap those dividends.”

Dividends that have been reaped include more than 2,000 students going to college with Say Yes help. Thus far, the program has not been able to demonstrate substantial improvement in student performance.

“The achievement statistics are difficult to look at because the state standards have changed with the Common Core, but they have not changed as we would have hoped. The dropout and completion rate is not where it should be.”

The results, he suggests, might be very different if economic times had not declined so dramatically just as Say Yes came to town. “Say Yes,” he writes, “was mugged during what it expected to be a serene walk in the park.”

Say Yes chose Syracuse to make its famous districtwide promise in part because of the 2003 court ruling known as the Campaign for Fiscal Equity (CFE) ordering New York to ramp up its spending for urban school districts. Say Yes was counting on the strongly pro-education governor, Elliot Spitzer, to provide an additional $3,500 per student to Syracuse schools, almost exactly the amount they felt was required to enhance instruction and student supports. When Spitzer became client No. 9 and the financial crisis became the Great Recession, the spending evaporated.

“The CFE cutback is a result of the recession,” says Maeroff. “Five years have passed, and the extra $3,500 per child is not there. That’s not Say Yes’ fault, not the fault of the Syracuse City School District.”

“Seldom has an enterprise of this magnitude been so dominated by women,” he writes, causing him to “wonder whether the degree of collaboration and selflessness would have been the same if men were in the same positions.”

That founding group has started to break up in recent years as Cantor moved on to Newark and Schmitt-Carey has shifted her focus to the new Say Yes startup in Buffalo, amid widespread rumors of tension between her and Contreras. (Maeroff would not comment on those rumors.)

Syracusans reading the book will be intrigued to learn many personal details about local leaders, among them Chief of Police Frank Fowler and Say Yes local director Pat Driscoll.

Maeroff considers Contreras, now in her third year at the helm of the district, a key player for the future of Say Yes and the Syracuse schools. “The challenge is to hold on to her,” Maeroff says of Contreras, who reportedly has been contacted by headhunters. “She has been there during a very important period and has a lot to give. She has a commitment and is a very able person.”

He acknowledges that anxious parents contemplating sending their kids to city schools to take advantage of Say Yes have a lot to ponder. The results may be a long time in coming.

“Ultimately, all the interventions in the world,” says Maeroff, “will make little difference if they don’t translate into higher achievement in the classroom. The challenge is huge.”

The Most Polarizing Issue in America
Covert Operation
To Top