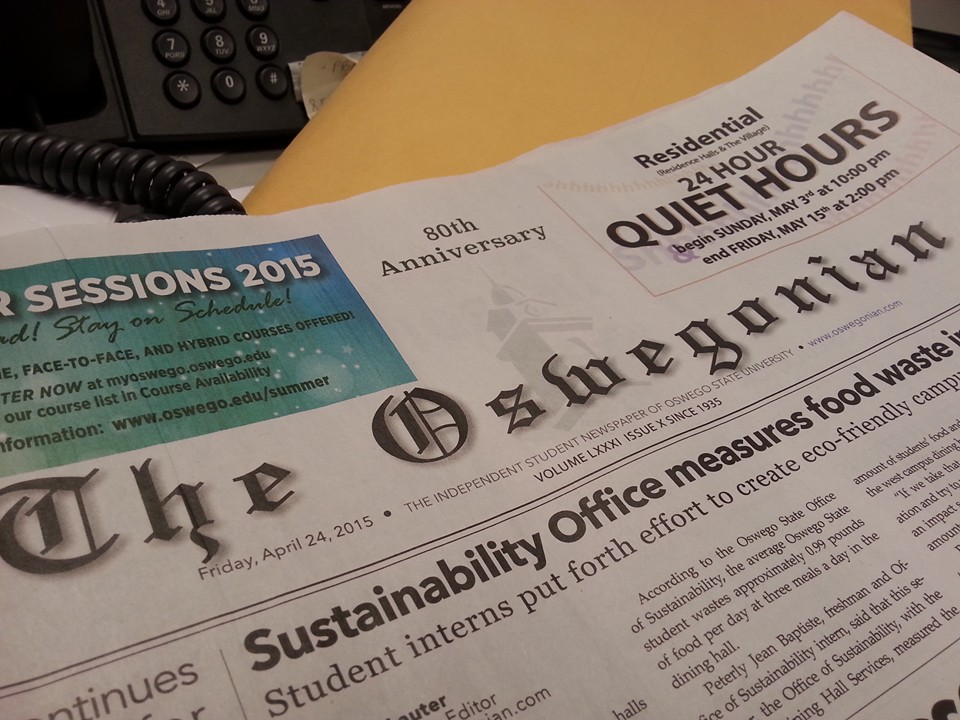 There is no such thing as a “student journalist” or “student newspaper.”

That wasn’t made clear to me until my senior year at the State University of New York at Oswego. It was during my student newspaper’s introductory meeting at the beginning of the fall semester. In trying to recruit new writers for The Oswegonian, the editorial staff ― me being the new news editor ― tried our best to explain to the interested students how important and beneficial our organization was.

No one did it better than our arts and entertainment editor.

“We’re really lucky to get to do what we do,” he said. “Not many other industries or fields get to go out and basically do the job they are learning to do, as students, quite like we get to do. We get to make a difference before we graduate.”

Even for someone who had been involved at the newspaper for three years, who had just spent the summer shouting questions at Gov. Andrew Cuomo and interviewing New York state lawmakers in Albany, I never thought about it quite like that until that one moment.

And if it took that long for me, does anyone else ever think about it that way?

That’s why we should be constantly reminding ourselves just how important and beneficial organizations like The Oswegonian really are.

That’s what last Wednesday was about. After learning that Southern Methodist University’s paper, The Daily Campus, would be losing its independent status and re-affiliate with the university due to lack of funding, student newsrooms across the country flooded social media last week with a campaign called #SaveStudentNewsrooms. The effort aimed to raise awareness of campus media and encourage alumni to donate to their respective college organizations.

The situation facing The Daily Campus is sadly something many student publications are experiencing. Universities have not been immune to the troubles of the mainstream industry in the digital age, after all. While it may not sound so bad on paper (pun intended), campus media affiliating themselves with administrations ― meaning they receive funding from them ― is in direct contrast to the very objective of journalism.

Such a relationship means college leaders could decide at will to withhold money to the newspaper if they print stories unfavorable to the school’s image or harshly criticize the administration in staff editorials and opinion pieces. It would have a chilling effect on newsroom investigations, discourage aspiring journalists and prevent countless important stories from ever reaching the public. This is the very reason college newspapers take their independent status so seriously ― a status The Daily Campus has held since 1930.

The timing of #SaveStudentNewsrooms couldn’t have been more perfect. Just one week earlier, Syracuse University’s student-run The Daily Orange proved once again what a “student newspaper” is capable of. The paper published a video of the Theta Tau fraternity chapter exhibiting “extremely racist” behavior after the university said it would not be releasing the video.

“I solemnly swear to always have hatred in my heart,” a member said, referring to blacks, Hispanics and Jews in derogatory terms.

The disgusting videos sparked days of protest at the university, made national headlines for several days and has revived the conversation about Greek life conduct on college campuses ― especially at Syracuse University ― whose officials have had a lot to answer for in the fallout of these reports.

Do you think they would’ve allowed the publication of those videos if the college controlled The Daily Orange’s funding?

While the publication deserves a lot of credit for taking the lead on this momentous story, a student newspaper’s independence is about much more than just the once-in-a-lifetime stories that get national attention. Student reporting can and often does create significant changes on campuses that stretch long beyond their graduation.

For instance, while I was on the editorial board at The Oswegonian, which has held an independent status since its inception in 1935, we had produced several stories and editorials criticizing the administration for their extreme lack of transparency regarding reports of rapes and sexual assaults on campus. No one was looking to make the lives of any victim more painful, but we and students alike felt we had the right to at least be notified if such a heinous crime had been reported in the same place where we attend classes during the day and sleep at night, especially after we had reported that four rapes had occurred at the campus the previous year. The year I graduated, there were 13.

I was pleased to see more than a year later, after a lot of resistance, that the college president had amended the school’s policies to better inform students of such incidents.

That’s a strong contrast to the University of Kentucky, who in 2016 refused to disclose details to The Kentucky Kernel about how the college handled a professor who sexually harassed students. The Kentucky state attorney general ruled that the university must release the information. In return, the school president sued the student newspaper and attacked the publication and its editor, prompting journalism faculty to send a letter to him demanding an apology to the students.

There’s nothing “student” about them.

Luke Parsnow is a digital producer at CNY Central (WSTM NBC 3/ WTVH CBS 5/ WSTM CW6) and contributing writer at The Syracuse New Times in Syracuse, New York. You can follow his blog “Things That Matter” on WordPress and follow his updates on Twitter.