Joe Louis Walker has been called fierce, gritty and ferocious on guitar. The San Francisco-born trailblazer, known for his domineering style and impressively versatile chops, will bring those traits to Upstairs at the Dinosaur Bar-B-Que on Sunday, Feb. 16, during a benefit for this year’s New York State Blues Festival.

“I incorporate a lot of influences in my music,” he says in a phone interview from his Hudson Valley home. “It helped to formulate me as a musician. But Willie Dixon told me, ‘Your style is all over the place. There’s nothing wrong with that: It shows you’ve done your homework. But rein it in. You don’t want to be a jack of trades, master of none.’ It served me well. I can play on stage with Herbie Hancock or Ronnie Wood or Ronnie Brooks. I can move in those circles and feel comfortable. You’ll hear a lot of different things {in my music}.”

Much of that flexibility is a product of Walker’s upbringing in the burgeoning San Francisco music scene, where he played with or opened shows for everyone from Lightnin’ Hopkins to Jimi Hendrix to Thelonious Monk. He took full advantage of being in the middle of a melting pot of sounds. 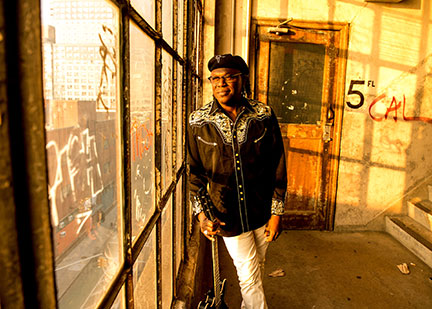 Joe Louis Walker: “I want to travel around the world as an ambassador of music.”

“I was in the right place at the right time,” he says. “I was more lucky than good at the time. I was fortunate to cut my teeth around great older musicians. I was always the youngest guy.”

Walker started playing clubs when he was 14, and was on his own by the time he was 16. In a fortuitous turn of events, in 1968 he became quick friends with Michael Bloomfield, who was in the Paul Butterfield Band. Walker saw the band on a Thursday and met Bloomfield later when the pair both headed for a bookstore. As they spoke, they realized their mutual friends and soon enough were housemates.

“Mike became like a brother to me,” Walker says. “I’d get home at two or three in the morning and someone from Muddy Waters’ band was in one room and Mick Taylor from John Mayall’s band was in another. Every day was like that.”

In 1975 Walker detoured from blues-rock to gospel for a decade-long run, but went back to the blues after performing at the New Orleans Jazz and Heritage Festival in 1985. “I’m a restless soul, musically,” he notes. That switch led to his signing with HighTone Records, followed by his first album on the label in 1986, Cold is the Night.

Before joining with Alligator Records in 2012, Walker released 23 albums (his next record, Hornet’s Nest, drops on Feb. 25), performed about 250 tour dates annually and has been the recipient of several Blues Music Awards, among others. For the last six years he has also been part of the Thelonious Monk Institute of Jazz, which brings professional musicians to students around the world in an effort to connect people and cultures.

“We put on shows to show the importance of music as a conduit for understanding around the world,” he says. “India, the South, Turkey, United Nations. . .  we do so much and it’s all people who are somewhat well-known. They donate their time and do workshops when we come into town. It raises awareness of music and its power in context. It brings people and cultures together.”

Walker, who turned 64 on Christmas Day, also contributes through other organizations which help the homeless, the hungry and others in need. He does it all without thought of return, but purely in the spirit of paying it forward.

“When you’re young, your goal is to be known,” he says. “When you’re older, you want to have a legacy. I take a page out of Louis Armstrong or Buddy Guy. I want to travel around the world as an ambassador of music. That’s what I like. That’s what I want to do. I try to keep my feet and heart in something I can contribute with my music and hopefully it can help alleviate some of the tribulations we’ve all got to deal with every day. I come from a time where it was a given that you would give back.”

“For me, I really enjoy seeing a young person make their mistakes in music and ask, ‘Why isn’t this working?’ And you say, ‘Well, you learn more from your failures than your success. It might not be that it’s not working, it’s just not working right now.’ Looking in the history of music, they’ve always been on the outskirts, crazy, this and that. Bob Dylan’s ‘Like a Rolling Stone’: Why was it six minutes song? It was the first ever on radio to be six minutes because he wouldn’t let them cut it apart. It wouldn’t have been the same song. If you fall down, you’ve got to be able to get back up. We all fall down.”