Basketball season might be heating up, but it’s about to get a lot colder in the Carrier Dome.

On Saturday, Nov. 22, the Dome — home to Syracuse University’s football, basketball and lacrosse teams — will be transformed into an indoor ice hockey arena. The Syracuse Crunch will play the Utica Comets in the Frozen Dome Classic, the first professional hockey game in the Dome.

The transformation began early Monday morning. What would typically take about two weeks will be done in three to four days, said Jim Sarosy, chief operating officer for the Crunch.

“We’ll be going 24/7. There will be no breaks until that ice is up and running,” Sarosy said.

He called it an “all hands on deck” situation, with laborers, mechanics, ice experts and Dome personnel contributing to the construction.

The idea of playing a Crunch game inside the Carrier Dome had been tossed around for about three and a half years, Sarosy said.

In February 2010, the Crunch hosted an outdoor game — the first in American Hockey League history — that was “wildly successful.” After that event, the team started looking for the next big thing, which is where the Carrier Dome came in. 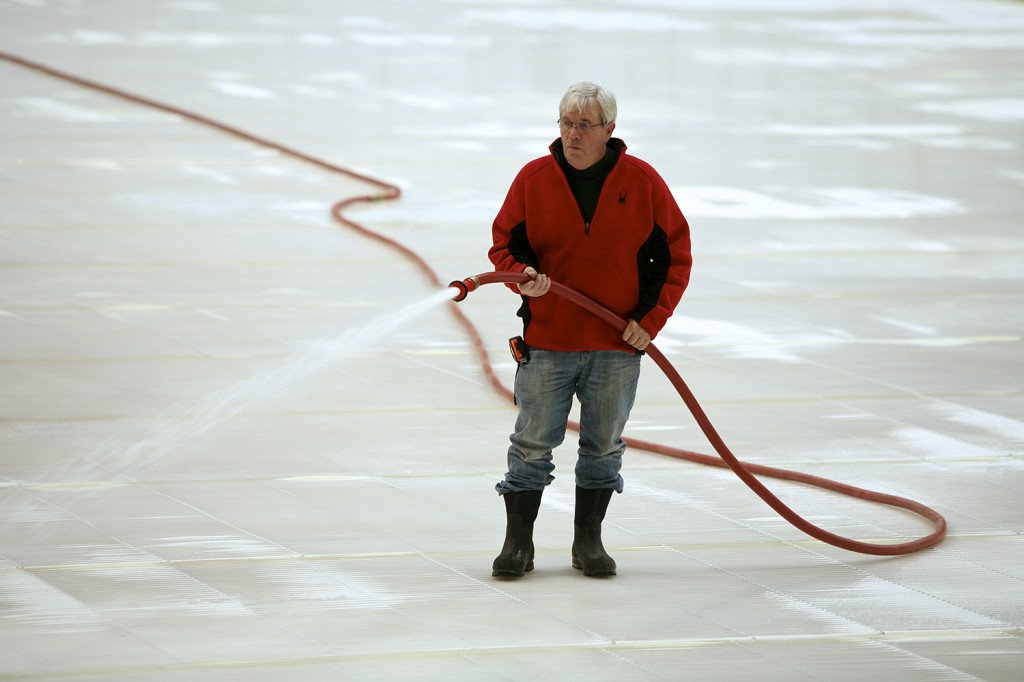 “This was, I guess you could say, the logical follow up,” Sarosy said.

But working around the schedules of the teams that play inside the Dome always made it difficult to find a time to build and remove an ice rink. This year, they were able to make it work.

On Sunday, there was a home Syracuse University basketball game. Monday morning, construction of the rink began. On Saturday, the Crunch will play in the Dome, and later that night the ice that was so carefully laid will be cracked and shattered by sledgehammers so the SU basketball team can take on Loyola on Tuesday evening.

It’s a tight schedule, but the Crunch’s resident ice expert, Jim Hartnett, said the plan was to get the core elements of the rink — such as the base and the boards — up by Monday afternoon and have ice by Monday night. From Tuesday on, the focus would be getting the rink “skateable.” He said he hoped to have the ice skate-ready by 3 p.m. Thursday.

Hartnett estimated there would be 30 people involved in getting the rink built and about 50 people breaking it down and returning the Dome to normal after the game. Hartnett is leading the project and working in collaboration with Ice Rink Events.

Though it’s the first time he’s built an indoor temporary rink, Harnett has been building ice rinks for 35 years. But this project is special.

“Being from Syracuse, it’s kind of neat to be working on something this high profile in your own city,” he said.

He’s worked on rinks all over the country, but he’s never gotten attention like this before. Hartnett’s grandsons are reading about the game in the media, and his family, friends and neighbors are constantly asking him how the project is going and what it’s like to be working in the Dome.

As the first professional hockey game to take place in the Carrier Dome, it will be a memorable night, Sarosy said.

“It’s one of those events five years, 10 years, 20 years from now, they can say, ‘Hey I was at the Toyota Frozen Dome Classic,’ the first and probably the only — you know, you never want to say ‘never’ — but probably the only game ever to take place inside of here,” he said. 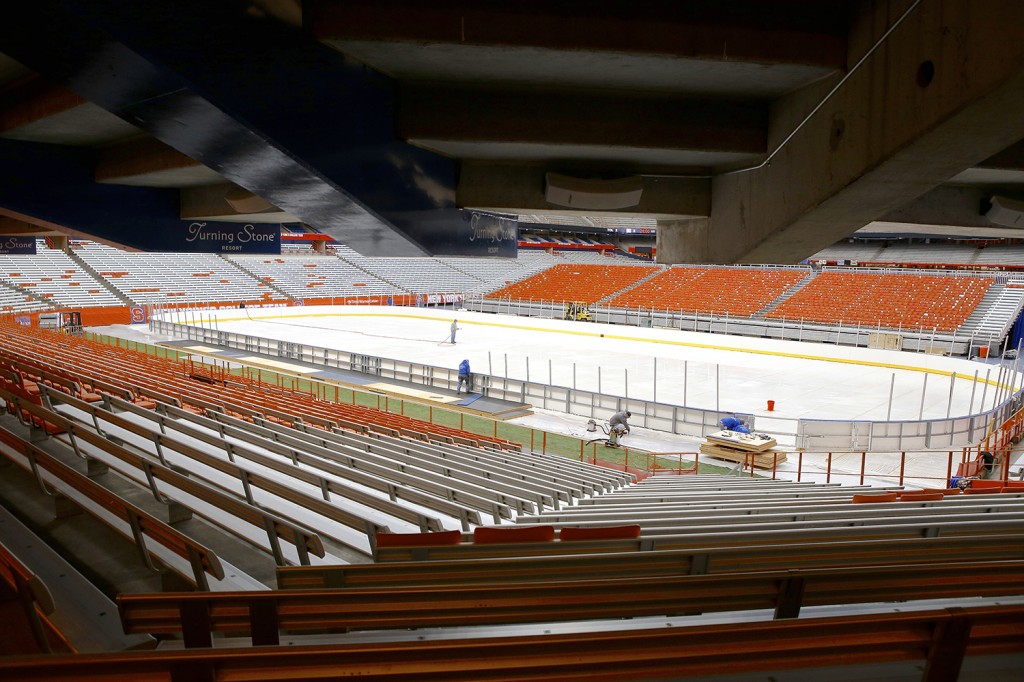 The game has the potential to break the Crunch’s record attendance of 20,183. Sarosy said they’re on track to break the record, and he’s hoping for 30,000 or more people in attendance.

It will be a chaotic and stressful week for the crew, but Sarosy and Hartnett both said they’re looking forward to making history with this game.

“The moment we’re all looking for right now is five minutes into play when you’re standing rink-side and you’re looking up and there’s 30,000-plus people cheering on for your product, knowing that the record’s in hand, the ice is successfully built, that’s the rewarding part for the hundreds of people that have helped make this happen,” Sarosy said.

When people walk into the Dome on Saturday, Harnett said, he thinks they’ll be shocked to see the home of Jim Boeheim and SU basketball and football turned into an ice hockey rink.

“And maybe a little cooler, too,” he said jokingly.

Crunch Aim for the Record

What do you get when you take the first professional hockey game at the Carrier Dome, add a record crowd, and throw in the likes of Steve-0 from MTV’s Jackass? The biggest Dome party this side of Duke-Syracuse basketball.

The Syracuse Crunch will host the first professional hockey game at the Dome when it faces the rival Utica Comets in the Frozen Dome Classic at 7 p.m. Saturday, Nov. 22. The Crunch will easily break the American Hockey League indoor attendance record of 20,672, but it’s also gunning for the professional indoor record of 28,183 set at Tampa’s Thunderdome in 1996 for a Stanley Cup playoff game between the Philadelphia Flyers and the Tampa Bay Lightning.

The ice rink will be set up the same way as the basketball court at the Dome, so the seating capacity is more than 30,000. On Feb. 1, an NCAA on-campus record of 35,446 fans attended the Syracuse-Duke basketball game at the Dome.

The Frozen Dome Classic will be a day-long event, with a college game between Division III powerhouses Utica and Oswego at 3 p.m., a Syracuse vs. Utica law enforcement charity game before the Crunch game, a Crowne Plaza Syracuse pre-game party from 3 to 6 p.m., and free autographs from former Syracuse University and New York Giants running back Joe Morris and NHL Hall of Famer Glenn Anderson. And, to top it all off, comedic stuntman Steve-O will take part in what promises to be an outlandish on-ice stunt during intermission of the Crunch-Comets game.

Tickets from $20 to $50 remain available, with discount prices for groups of 15 or more. Tickets can be purchased at the Crunch office at the War Memorial Arena, the Carrier Dome Box office, by calling the Crunch at 473-4444, or at any Ticketmaster outlet.

Matt Michael is a freelance writer based in Syracuse.
Email him at [email protected].

Interview: Jeff Speck
You Get What You Pay For
To Top