It’s been Beatle-mania all over again, as fans recognized the anniversary of the fab four’s legendary first appearance on The Ed Sullivan Show on Feb. 9, 1964. It was a performance that would change the course of music history for the rest of the world, an influence that is undeniable.

So, as expected, Beatles tributes cropped up near and far, within communities and on TV with specials and the CBS concert, “The Beatles: The Night That Changed America – A Grammy Salute,” aired Sunday, Feb. 9. Though the star-studded power of that show, with greats like Stevie Wonder, Dave Grohl, Joe Walsh and Ringo and Paul themselves (among many others), was fantastic, Syracuse was fortunate to have its own tribute show that 1,200 people attended. It was one that featured Syracuse’s finest (and Syracuse Area Music Award-winners), such as Phil Solem (of The Rembrandts) and Joey Molland (of Badfinger). It featured talent that could compete with the very best.

To put on a Beatles tribute is a task I never want to be strapped with. The weight of the event and doing justice to the monumental list of classic songs in the catalog is daunting enough – and then dealing with the production of such a show and the task of filling a venue like the Landmark Theatre … no, thank you. 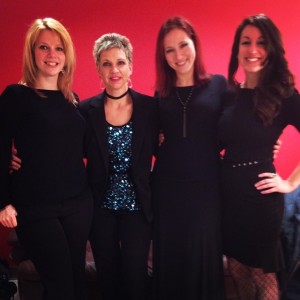 However, I was lucky enough to be a part of it, playing a small role as a violinist in the “Girls with Kaleidoscope Eyes” string quartet for “Strawberry Fields Forever” and “Here Today.” Once again, pulling in as one of (or maybe the) the youngest on the stage, I felt awe-struck being around artists also on the bill, musicians who have proven themselves in Central New York and beyond.

But Paul Davie, local musician and extreme Beatles lover (he playfully admits, “I eat Beatles for breakfast”), was up to the challenge, and that in itself deserves kudos. Not only did he care enough to put the production on, but he cared enough to bring together the best.

It was a difficult show to produce. It clocked in at more than four hours with dozens of musicians and equipment, videos between acts and all the other typical show stresses. Sound check was long and tedious and transitions were hard. Managing sound was an enormous job that wasn’t flawless, and herding musicians was especially trying in the massive Landmark. But talent carried the show.

As usual, to name standouts is difficult. But to (very personally) name a few: Todd Hobin and Doug Moncrief on “Something” and “Let it Be” were emotionally wrenching; the Dean Brothers were absolutely perfect recreating the vocal magic of songs like “Because” and “Nowhere Man”; and Mark Hoffmann had me misty with his wailing guitar solo on “While My Guitar Gently Weeps” (Gary Clark Jr. and Joe Walsh … watch out).

Renditions were so moving, I immediately found myself messaging my own bands, saying, “We need to play this song ( 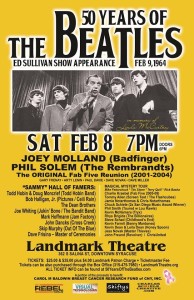 specifically, ‘Let it Be’ and ‘Helter Skelter’),” hoping we could do them just some of the same justice these artists did.

But beyond that, the energy of the night hit even higher when musicians were told that the award-winning singer/saxophonist Joe Whiting was in a car accident on his way to the show. He left a gig at Song Mountain around 6 p.m. and within a quarter mile, was hit, head-on, by a driver who came careening at him over a rise in the road.

“It was like someone shot a bullet,” he says. “The car came flying over the top right into my lane. It wasn’t sideswiping me. It was head-on.”

The airbag went off, and Whiting’s car was totaled. The woman in the other car was unconscious after impact, but Whiting walked away from the accident unharmed. The rescue squad came, and police from three different municipalities rushed to the scene within minutes. The woman was taken away in an ambulance and Whiting was checked out, but insisted he didn’t need a hospital. Medics recommended it but noted that if he didn’t want to go to the hospital, it was important that he and others kept an eye on his condition for the next 24 hours.

His wife and a friend had been on their way to the Landmark and immediately switched direction to pick up  Whiting. After they collected him, Whiting’s friend suggested, “They said to watch him for 24 hours … we could watch him on the stage.” Whiting agreed, much to his wife’s disapproval, and he not only made it to the Landmark but went right on stage and performed his two songs, “Slow Down” and “Lady Madonna,” letting the audience know he had just been in an accident but still made it to play.

As we watched the show, violinist Joe Davoli looked on and said with admiration and a smile, “Now that’s a real musician.” 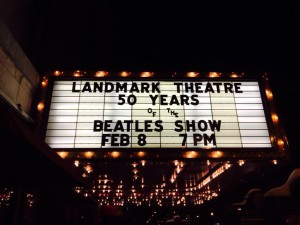 Whiting couldn’t stay for much of the rest of the show, as the after effects of being slammed with an airbag (and other realities of being in a major accident) began to set in. But it’s his reaction that proves the vibe of the event and how much of an amazing musician, and person, he is.

“I was just disappointed I didn’t get to see more of the show,” he says, selflessly. “I’m OK and it was just two songs, not three sets, and I was glad to be involved. It was a special night for a lot of reasons and I wish I saw more. I was glad to be a part of it and I’m glad to be alive. I’m hoping the other person is OK, too.”

As usual, as I walk away from another life-changing community concert experience, it’s Whiting’s attitude and words that stick with me so much, and it’s an attitude that has continued to ring true as musicians involved in the production share photos and exchange emails commending each other and expressing their complete admiration for one another and gratitude that they were able to be involved at all. As a local music writer, I’ve heard so many times how “great the scene was” and how amazing “things used to be.” But I’m seeing and hearing more than ever how great the scene is and how great it is becoming. It’s people, like Whiting, who remind me most of this.

“I’m glad to be a part of the Syracuse music community,” he says. “It’s far more of a real music community than ever in the past. There is a genuine camaraderie of all styles and types that I don’t recall being there before. Whether I’m older and now can appreciate it or just because it’s there – I genuinely think there is much more of a legitimate musical community. There is a camaraderie among the musicians who wish the best and success for everybody. Again, I’m glad to be a part of it and I’m glad to be alive.”

Here’s to another amazing show, another group of amazing musicians and another lucky day to be alive.

Points of Reference
On the Comeback Trail
To Top