James MacKillop reviews Gross Indecency: The Three Trials of Oscar Wilde and A Man of No Importance

For the past three Januarys the Redhouse Arts Center has presented two productions in repertory on pretty much the same set, sharing many of the cast members. The two would be written by different people at different times, but as artistic director Stephen Svoboda asserted, by juxtaposing them one could be seen to be illuminating the other. By turning your head a bit and squinting, you could always sorta see his point.

This year’s midwinter high wire act has never worked better. By staging two very different works, one a bittersweet musical and the other featuring the records of three successive trials from 1895, lines from shows really are illuminated or refracted in the other. That’s because one is about a bus conductor obsessed with Oscar Wilde, and the other features the ultimate wit, Wilde himself, as a tragic hero.

The credits for the creative team run to more than eight pages, but the indispensable man is newfound Equity player Michael Pine, who brings extensive Shakespearean credits. Both shows run nearly two hours and 45 minutes, with Pine in most scenes. In A Man of No Importance he plays Dublin working stiff Alfie Byrne, who runs his own makeshift theater company trying to put on Wilde’s racy Salome in a church basement. He speaks and sings in an authentic Dublin accent but lacks the looks to attract either the girls or the boys. 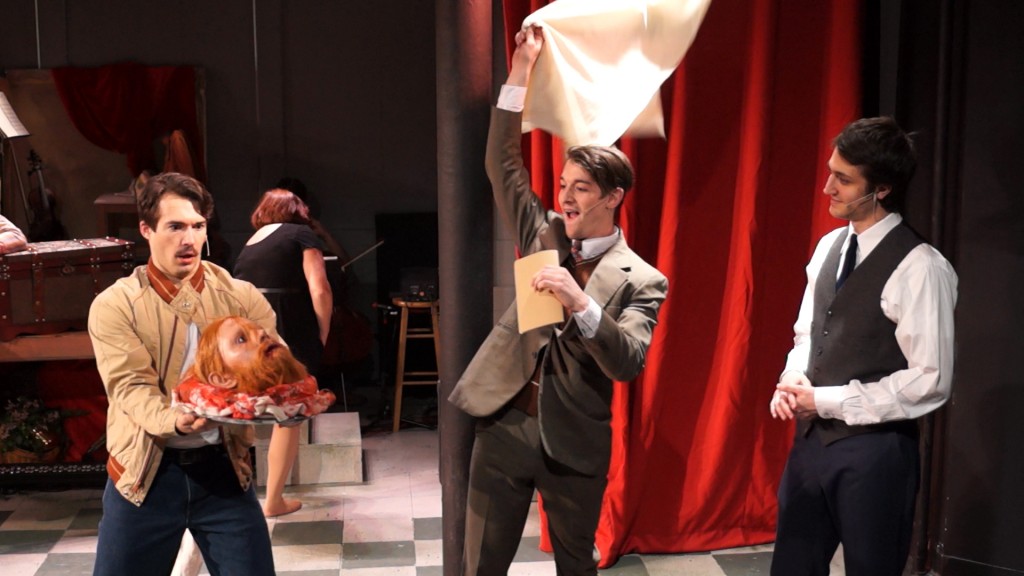 In Gross Indecency, now in a long black wig, Pine gains hauteur and speaks in the cut-glass tones of London’s Mayfair. Blessed with a Barrymore-esque noble profile we do not notice in Man, Pine carries himself like a Florentine prince, and is far handsomer than the historical somewhat portly Wilde.

A Man of No Importance, based on the fondly remembered Albert Finney 1994 movie, comes from playwright Terrence McNally and composer-lyricists Stephen Flaherty and Lynn Ahrens, the team behind Ragtime. Making an area premiere here, the show brings two surprises. One is, unlike the movie, that it is a love letter to the artistry of community theater. Think of it as a refutation of Christopher Guest’s snarky mockumentary Waiting for Guffman or the Bottom and the Mechanicals sequence in A Midsummer Night’s Dream.

Secondly, the Flaherty-Ahrens score employs so many Irish idioms, more than in, say, Finian’s Rainbow. Among the cleverest is a patter song, “The Burden of Life,” which is part Gilbert and Sullivan, part Irish jig, which Alfie’s sister Lily (Aubry Panek) sings when she thinks he’s found a girlfriend. Another is the plaintive love song, “The Cuddles Mary Gave,” sung by a supporting character, Baldy (Jason Timothy). Not that Irishry is laid on too heavily. One of the real show-stoppers is “Going Up,” led by Alfie’s star player Carney (John Bixler), a paean to show business in the vein of Cole Porter’s “Another Op’nin’, Another Show.”

Svoboda has brought in strong people from out of town, like Matthew Elliott as the bus driver Robbie. Yet he assigns some of the most fun to company regular Bixler and some of the top people from community theater, including Carmen Viviano-Crafts as the shy Adele, Aubry Panek at the puritanical but libidinous sister Lily, plus Kathy Egloff, Leila Dean, and Lynn King.

Gross Indecency, from the Victorian euphemism for unspeakable homosexual sex, was put together by Moisés Kaufman, known for The Laramie Project, a structurally similar enterprise. Except for a mock-pedantic explication of the trials spoken by a fictional professor (Chris Coffey), all words in Gross come from H. Montgomery Hyde’s diary of the proceedings, augmented by press reports and later memoirs and analyses.

Kaufman footnotes ostentatiously. In a moment of catastrophic hubris Wilde began by suing the Marquis of Queensberry (John Bixler) for libel. Queensberry, the regulator of boxing protocol, was the father of Wilde’s lover Lord Alfred “Bosie” Douglas (Matthew Elliott). A bully and a thick wit, he was nonetheless no fool. Deftly turning the tables, he gets Wilde himself on trial for the second two.

A Little Night Music: Isn’t it Bliss?
More Wilde Times at the Redhouse
To Top