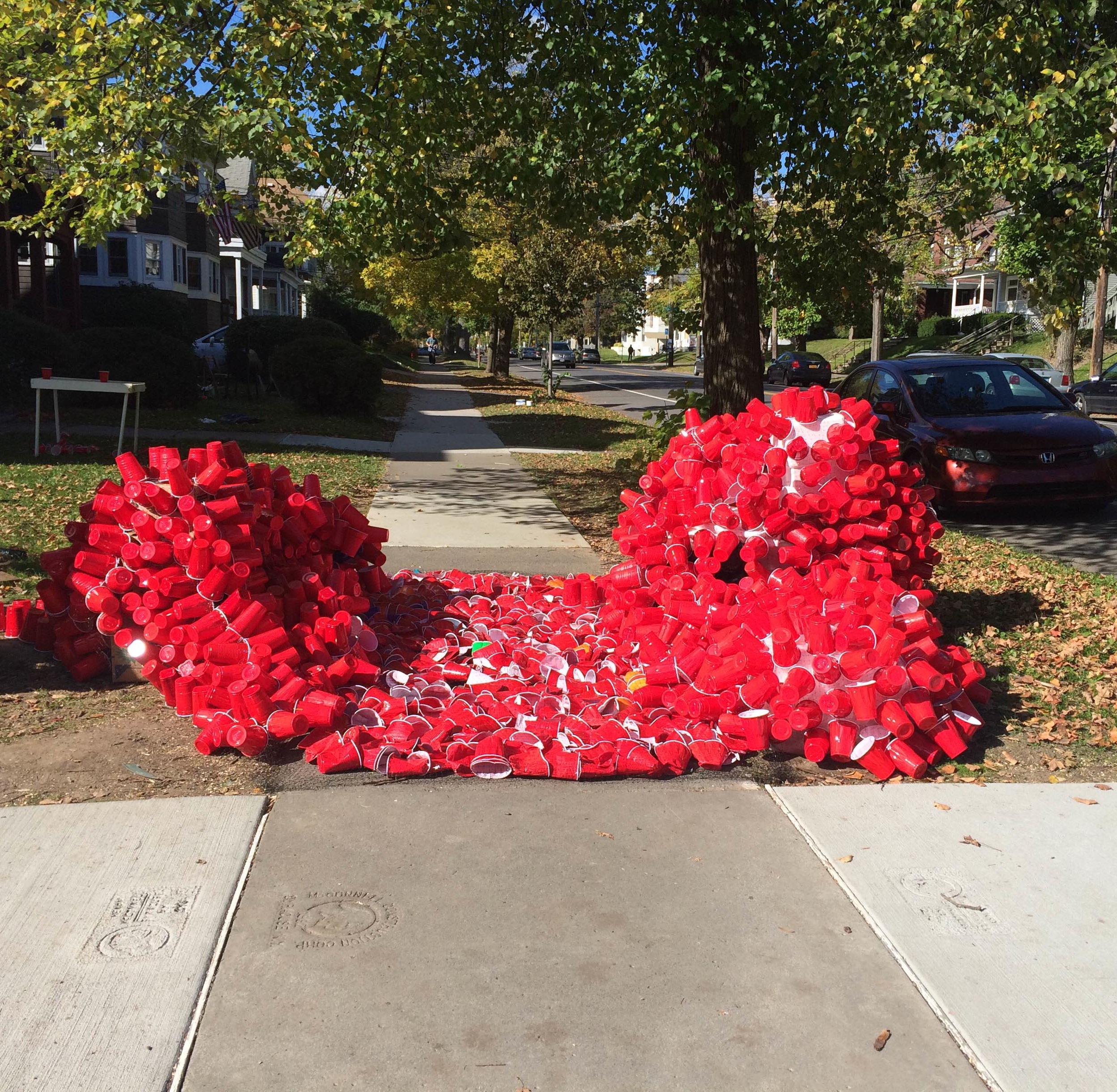 Reigning as the top party school comes at a cost.

A group of Syracuse University and SUNY-ESF students have created a public art installation of Solo cups to address the environmental effects of waste and party culture in Syracuse.

Leslie Baz, architecture student at SU and co-founder of “The Red Cup Project,” says she hopes that it will raise awareness of the waste produced by students when they party. In August, The Princeton Review crowned Syracuse University as the No. 1 party school in the nation. Baz said the ranking served as the main inspiration for the project.

She started “The Red Cup Project” alongside fellow architecture student, Vinh Vo, for a class called “Politics of Public Space.” They then teamed up with two other architecture students, Kate Chesebrough and Hamza Hasan, for their knowledge of art installation and construction. They now call themselves “SOLO SU.”

The team collected over 2,000 Solo cups from Euclid Avenue over the span of two weekends, either directly from the street or from collection boxes. As they collected the cups, they posted photos with an interactive map on the project’s official Twitter handle. The team then worked for two more days to create the first installation. 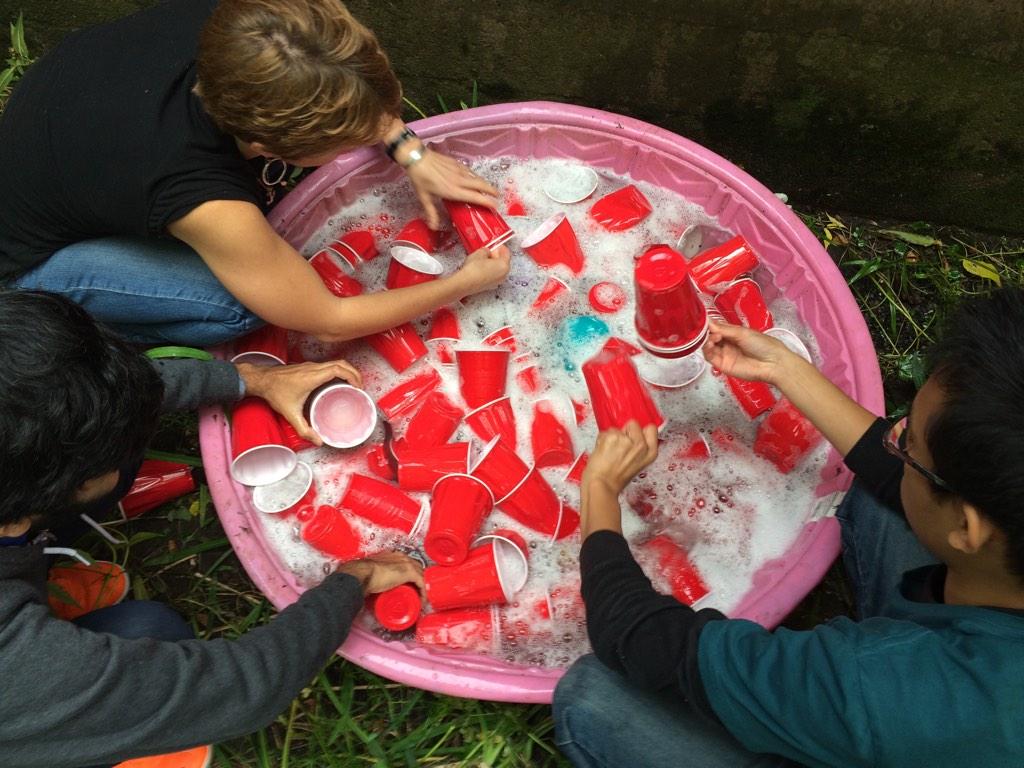 They placed the first display on the corner of Ackerman and Euclid Avenues, streets known for house parties by students. They formed a walkway of smashed Solos, with cups piled on either side resembling waves. Baz said she chose this location because the team picked up most of the 2,000 cups from front lawns on Euclid.

“It’s a first hand experience of how it’s like to walk on your own waste; and it’s a kind of interaction most people would want to avoid,” Baz said. “However, we treated the walk-able portion as a carpet, encouraging people to have fun while walking through it and make lots of crunching noises for the full effect.” 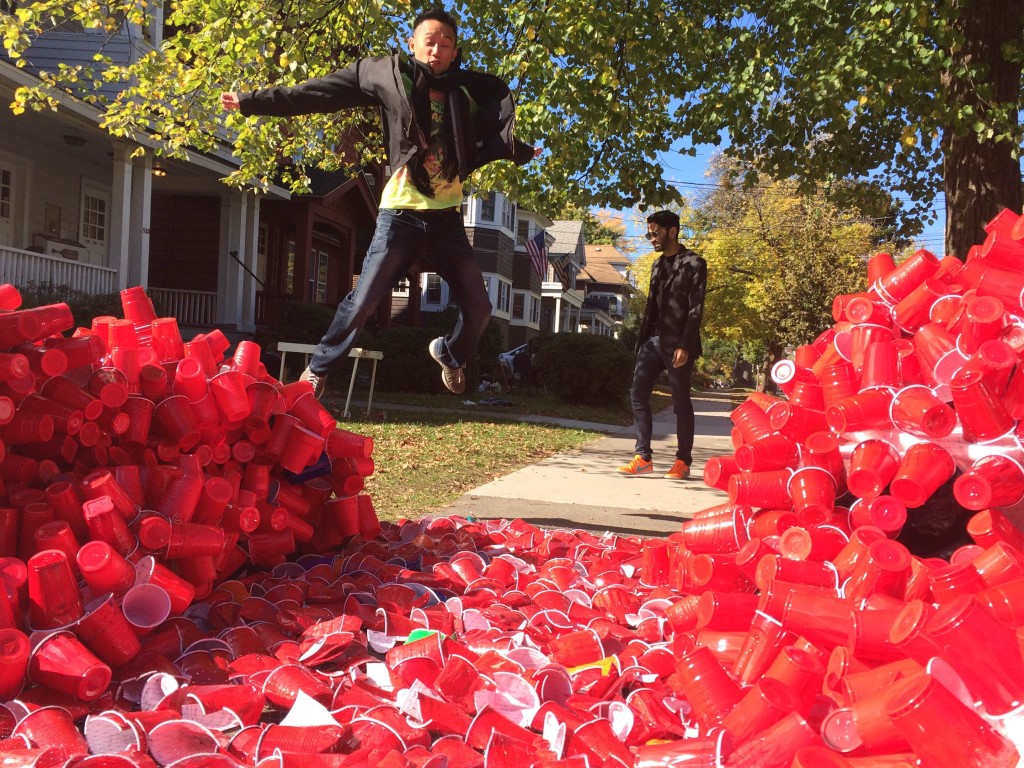 The next day, the group destroyed the mound and lined the smashed cups on the corner of Comstock and Euclid Avenues. For the final display, they destroyed the mound and placed the red cups in recycling bins on the SU quad. Even if students do not litter, the non-recyclable Solo cups will inevitably end up at landfills. This past weekend, team members Chesebrough and Hasan drove a minivan full of cups to the Tompkins County Solid Waste Division in Ithaca because local recycling centers do not accept No. 6 plastics.

The “SOLO SU” team are now working with Students of Sustainability at SU and plan to join them for “Trash Pick-Up Day” on Oct. 26. They also collaborating with them on an installation of recycled water bottles for an upcoming campaign for more refill stations on campus.

Baz said the team wanted the installation to appeal to not only students who party, but also to SU’s administration and even those not interested in party culture.  They hope that students will think twice before they party with the iconic red cups.”We wanted to think of ways in which we could get these audiences to come together and have a dialogue,” she said.

Check This Out: The Salt Market
Do You See This Man? What it’s like to be homeless in Syracuse
To Top