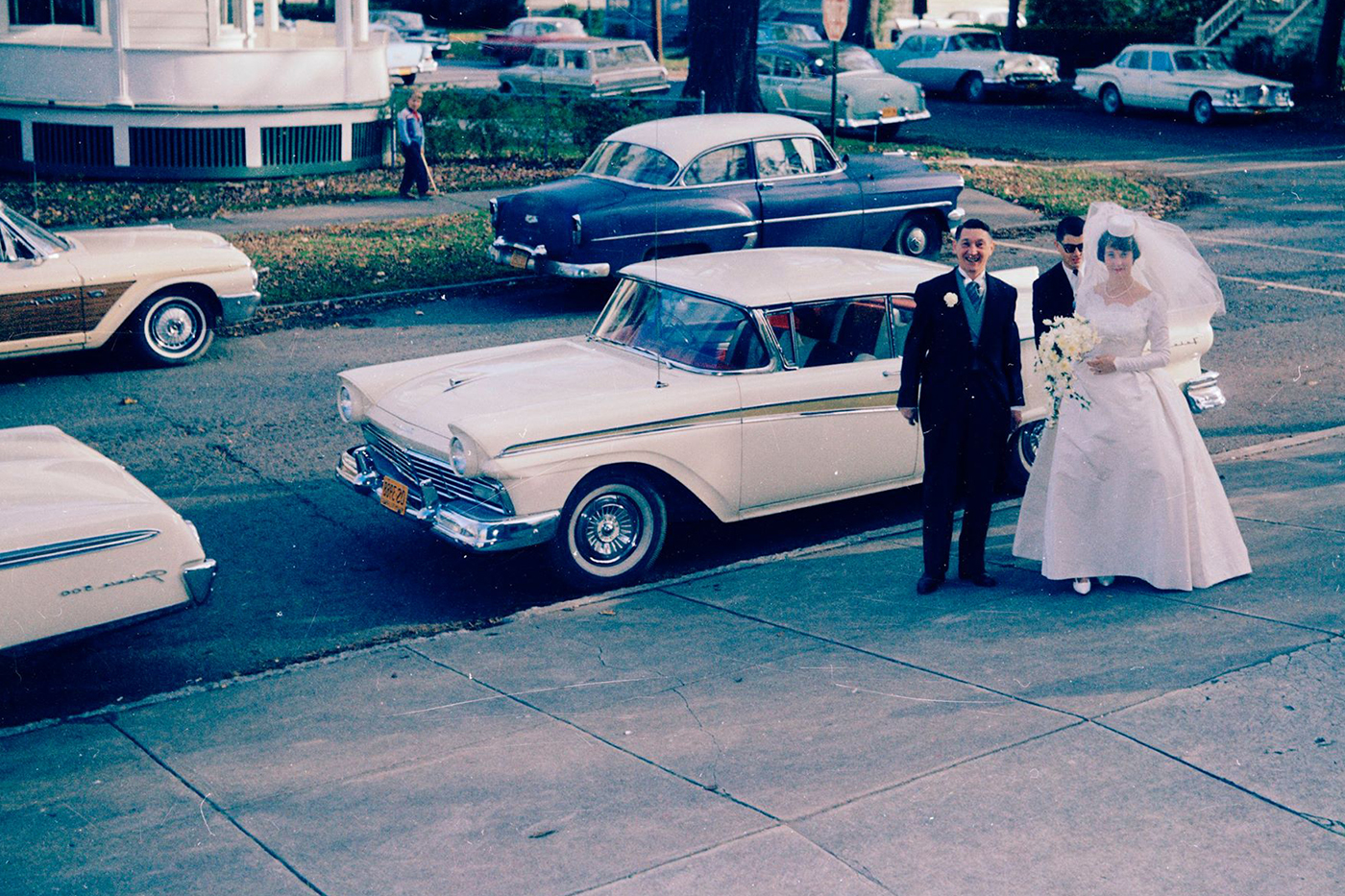 Digital and cell phone photography have become so ubiquitous in recent years that people tend to take for granted the technology that is at their fingertips. Few stop to think that in the not-so-distant past, the process of photography was completely different.

Film photography is a time-consuming, yet rewarding operation that is still utilized today as a hobby for enthusiasts, as well as in high schools and colleges to teach the basics and history of the art form to students. At SUNY Oswego, student interns with the Found Negatives Project: Oswego program restore old negative photographs from the 1950s to the 1970s to display in exhibitions around the campus and on Facebook. 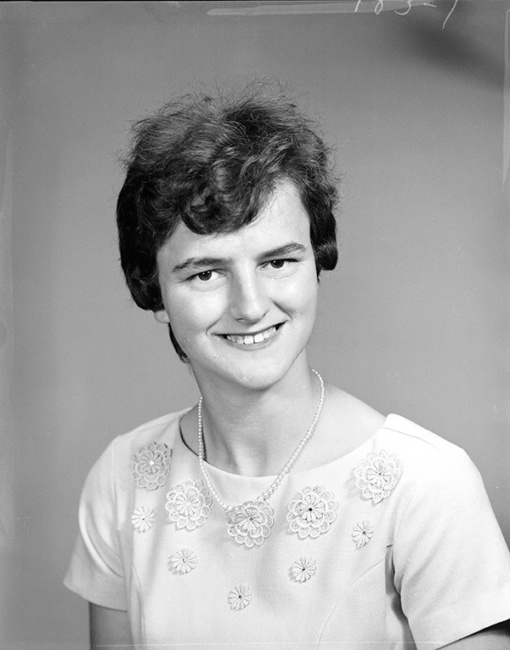 Photography professor Julieve Jubin, founder of the project, described its inception 2 1/2 years ago as serendipitous. Jim Early, a colleague of Jubin’s, came to her with a collection of more than 350 old negatives that were donated to his wife, Catherine, a local antique dealer in Oswego. The negatives are believed to have come from Gentile Studios, a now-defunct photography business on Bridge Street in Oswego.

“I had been working with (Jim) on another project, and he knew that I had the capacity to do something with (the negatives),” Jubin said. “And he said, ‘Well, what do you think? Is there some way that we can restore them and get them out to the public in some way?’”

With the assistance of a few eager photo interns and the use of Facebook as a medium to display the images, the Found Negatives Project was born. The negatives consist of medium format (2-by-3 inches) and large format (4-by-5 inches) strips. Subjects range from school and family portraits in a studio to grooms lined up outside of a wedding.

“Even beyond the photographic sense, it’s interesting to see into these people’s lives,” said recently graduated photography intern Alex Simone. “As little as we know about them, we’re seeing very personal scenes.”

The restoration process involves a Hasselblad Flextight X1 scanner, which costs up to $16,000. Upon completion of a scan, Jubin and her interns delve into repairing the images in Photoshop, which includes removing dust blemishes that may have gotten onto the negative during the scanning process. But if marks on the negative are present from the original photographer, they leave those features untouched.

“We have to decide which things are blemishes on the film itself,” Simone said. “Because if it’s a blemish on the film, it adds character. That can be interesting.”

Blemishes that may appear include retouching from the original photographer by use of an extremely fine paintbrush with added dye or ink to fill in inconsistencies within the negative.

Regarding the identity of the original photographer, however, is up for interpretation. Jubin said that the writing on the envelopes the negatives came in, which contains information about the subjects in the photos, appear to have different handwriting on them, leading to the belief that there was more than one photographer.

The writing on the envelopes, however, only tells so much. Small details such as a name, a date or an address accompany some of the negatives. Others have no information at all. This is where posting the photos on Facebook and putting together exhibitions plays a key role.

On more than one occasion, citizens of Oswego and the surrounding area have provided context to some photos. One instance especially resonated with Jubin during a November 2015 showcase of enlarged versions of photos at SUNY Oswego’s Penfield Library.

“We had this wonderful occasion just a day after (the photos) went up,” Jubin said. “A woman contacted me, and she’s a custodian here (at SUNY Oswego). She’s been working here for many years, and she said, ‘I was in the library walking through on my break, and I saw a picture there of my father, and he just passed away last week.’ And she said, ‘I would love if I could have a print of that. I’m going to spend time with my relatives during Thanksgiving.’” 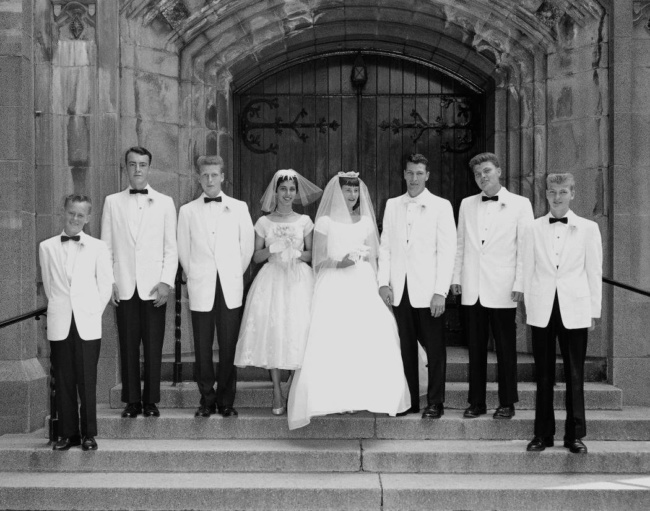 The photo recognized by a SUNY Oswego employee of the Hendersons front of St. Mary’s Church in Oswego.

Jubin explained that this type of connection to the community draws interest to the work they’re doing. It also helps college students get a sense of the history of the city where most are essentially passing through.

In addition to the showing at Penfield, the project has  been presented on Quest Day at SUNY Oswego for the past three years. The symposium for students and staff reveals to their peers what projects they have been working on during the school year.

While the exhibits put on thus far have been confined to the school’s campus, Jubin hopes this will soon change. “We have spoken to some historians and local business owners about the possibility of showing the work at the Fort Ontario State Historic Site,” Jubin said. “They have an exhibition space down there. It’s because of the historical value of the project. It would really be a nice setting.”

Jubin and Simone also agreed that a physical catalog and an eventual book of the photos could be in the works. Ultimately, though, once the photos of Oswego have run their course, Jubin has aspirations of broadening the project’s reach to other areas of New York state. She recently was given a collection of glass negatives from the 1890s by a worker from the Historical Society of Oswego. The worker heard of the project in an April 4 Palladium Times article and contacted Jubin.

What was originally intended to be a one-semester undertaking for Jubin has blossomed into 2 1/2 years of restoring photos and making them available to the public. “Our hope in the beginning was just to get the pictures on Facebook and see what happened. And I think because of the interest, it’s grown more than I expected,” Jubin said. “So I can’t be more pleased in terms of how the project has evolved and it definitely has gone beyond my expectations.”

Her Story
Photo Gallery: Taste of Syracuse 2017
To Top