If a natural resource (salt) put Syracuse on the map, it was Lake Ontario which drew many to Oswego

Christopher Sinatra lives in Oswego, NY where he studies early American history at SUNY Oswego. He is working towards earning his MA in December ’15. Read Sinatra’s twice monthly blog, “Sleepwalking Through History,” on SyracuseNewTimes.com.

These were just a few of the goods which made their way by boat to the north coast in the mid-19th century. If a natural resource (salt) put Syracuse on the map, it was Lake Ontario which drew many to Oswego. The Market House was built in 1836 by the village to facilitate trade and increase tax revenue for village improvements. Money borrowed to pay for construction failed to materialize for some time, but the Market House brought, bought and sold much more. Folks who are familiar with classy joints in Central New York know of the building (which still stands!) as Old City Hall. That much is true, but less well known are the purposes that preceded it. Not particularly lauded for its unique governing style, the business of the Port City was business, and Port City Hall was its headquarters. 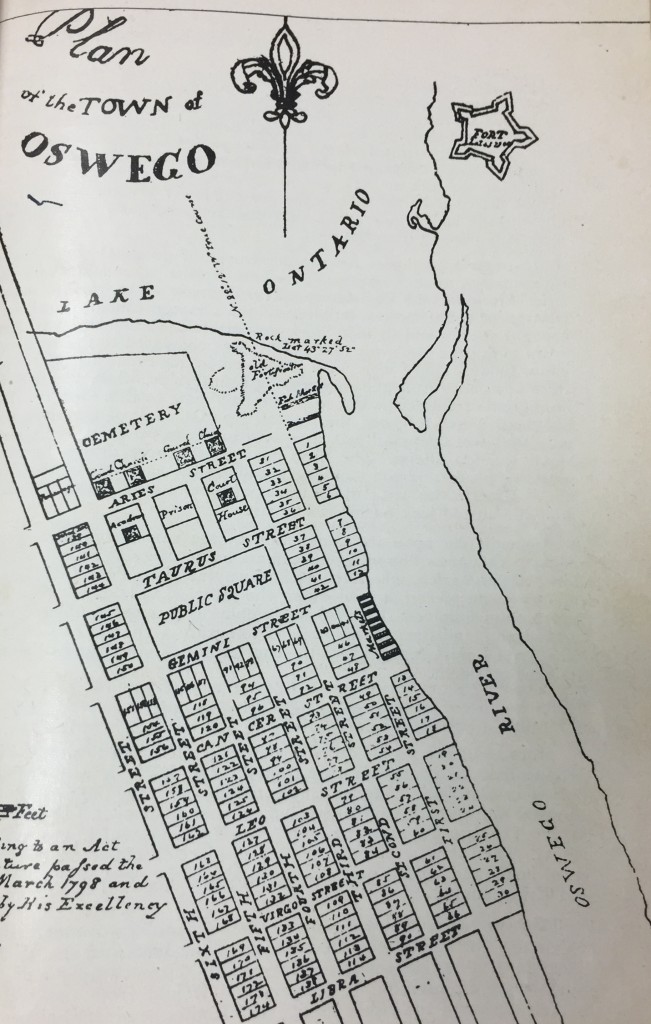 Plans for the town of Oswego.

Oswego (known to the Iroquois as osh-we-gah, or “the pouring out place”) was a crossroads of commercial, cultural and governmental rivalry from the beginning. After the French built a trading post and fort at Niagara to lay claim to territory and the fur trade, the British Empire did the same at Oswego in 1722. The forts built on either side of the river would host many a battle and in the Seven Years and Revolutionary wars. However, after Independence, British retreat (in 1796!) and a short interruption during 1812, it was time to build up, not tear down. In 1803, the federal government decided that Oswego would host a port. But, it was when Lake Ontario was connected to the Erie Canal by way of the 1828 Oswego Canal that the village’s major growth spurt could commence.

Before the number system so familiar today, streets were named after symbols of the zodiac. Whether this indicated a healthy optimism or a kind of Oswegonian exceptionalism I can’t say, but in 10 years, the population roughly doubled. The market was primed to receive the grain, lumber and finished goods, which the river bank and its businesses provided and the early ‘30s became known as the boom period. Between 1830 and 1836, canal toll revenue rose from under $4,000 to over $50,000.

While business on the lake in 1830 had been worth about a quarter million dollars, by 1848, the number had increased to over $18 million. Smaller canals on either side of the river were used to generate power for the many businesses and homes, which continued to multiply. Only at the end of summer when the water level was low was steam power necessary, City of Oswego historian Mark Slosek said. Until 1836, the Oswego lighthouse was on the east side of the river near the fort, but times had changed and the new beacon was built on the west pier.

That year, the village government authorized construction of the Market House, a four-story structure to be built on the river’s edge. It would be located in the “centre of business” between the Oswego River and West First Street to the east and west and Gemini (Schuyler) and Cancer (Seneca) streets to the north and south. Designed by Jacob Bonesteel, this church of commerce was “an architectural gem,” according to Slosek.

“It was modeled after the Washington Market in Albany, which at the time, set the standard in the state,” he said. “He added a third story, perhaps in an attempt to outdo the capital city.” 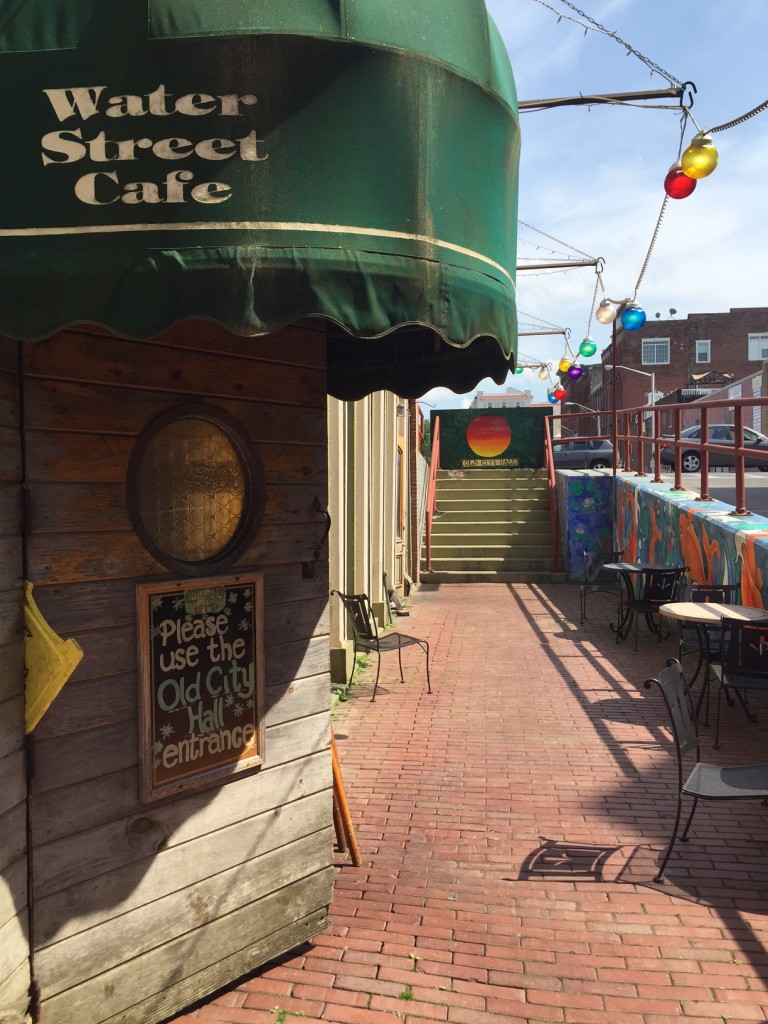 On the deck of the Water Street Cafe.

The design itself was noteworthy and the detail and symmetry of the late Federal style remains impressive to this day. In Landmarks of Oswego County, Judith Wellman points to the cupola which graced the roof, the rare globe window above the Water Street door and elegant brick arches which livened up the facade. Winning my vote for a comeback would be the walkway, which wrapped all the way around the building, allowing open doors to flood the Market with light and breeze.

The harbor was packed with steamboats and schooners which unloaded not only cargo, but people. Once landed, carriages and a plank road awaited some, but “the less fortunate individuals, immigrants often sick and destitute en route to the West, were frequently a burden to the village,” a newspaper account wrote. The variety continued inside the building. On the first floor, The Market House not only offered fresh meat, vegetables and fish, but was more like a modern mall; or to use the euphemistic title which has come back with a vengeance, a “commons.”

Its longest tenant was the village post office and various office spaces would eventually replace the few remaining meat stalls by around 1848, when the City of Oswego was incorporated. Food sales inside the building came to an end, but cynics of all things government might appreciate that fish remained for sale outside the north end of the building after the Market House was rechristened as “City Hall.”

Instead, government and culture were served from the river’s edge. Various organizations hosted social and cultural events in the spacious blue hall on the third floor, including plays, or “theatricals,” the Oswego Brass Band and public balls. The Mechanics Association and the library could also be found here. The Oswego Guards used the space for drill sporadically, but besides the soirees, some of the most contentious gatherings held were religious.

The Universalist Society and the Bethel Mission held services on Sundays in the 1840s, but when “another religious society” attempted to find a room of their own, the Counselors forbid all faiths from practicing on the premises. Yet, the West Baptist, Bible Tract Societies and even in Oswego, a Temperance Association would meet there in the early 1850’s. Later a journalist writing a history of the Hall would reason, “No doubt, the Council had decided that these activities supplemented the efforts of the Court.”

After all, it was the City Hall. Government offices from the Council Hall and Customs office to the Supreme Court were established, but they didn’t last for very long. In 1856, Mayor Lucius B. Crocker appointed a committee to decide whether government should be moved to a new location. It found in the affirmative, reporting that the present Town Hall on Water Street between that narrow street and the River, is an unpleasant and disagreeable location for a building devoted to the general business of the city… the space of twenty years has now immensely increased its value for commercial and mercantile purposes, while it has greatly reduced its value for city use.

Before leaving the antebellum history of the Port City Hall, it’s worth noting that perhaps the strangest function of the edifice lay underground. In the basement, below the commotion above, vagrants and accused criminals awaited deliverance from the County Jail, also known as the “Black Hole.” The nickname came from an infamous episode in British Imperial history when in 1756, an Indian prince sent thousands of troops to halt the expansion of a British fort and imprisoned anywhere from 140 to more like 60 men (and two women). Approximately 20 people survived the night in the eighteen by 15-foot cell. In other words, the Oswego Jail was probably dark, dank and crowded.

The racial and class connotations couldn’t be clearer, but even more upsetting to some was the peril to feminine virtue which the layout of the jail tempted. Three 9-by-12 foot cells for men and one for women were separated by only “a board or plank partition.” One particularly virulent letter, which referred to the lock up as “a revolting burlesque” is, I believe, worth quoting at length. 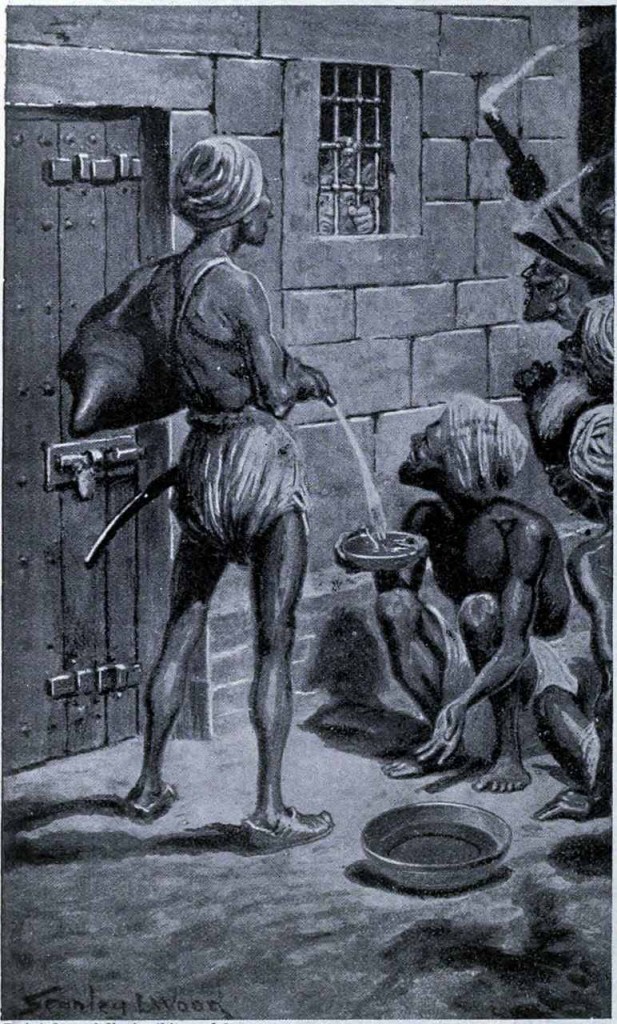 The Black Hole of Calcutta.

It is enough to mantle the cheek of every citizen with shame, to know that in this enlightened age of progress and improvement, when the condition of the unfortunate, the degraded, the abandoned are everywhere receiving the sympathy of and aid of the benevolent in their effort to better their condition – that here in the enterprising city of Oswego, the old “Black Hole of Calcutta” should be completely eclipsed and thrown into the shade!

How something so dark could be thrown further into the shade is puzzling, but I would venture to say that this local activist has been vindicated by history and can rest in peace.

It’s here when the modern industrial age barreled through. Soon after the City Hall was moved to its present location, its Water Street home was sold to the Oswego-Syracuse Railroad Company. Oswego’s peak economic years were still to come toward the end of the 19th century, but though the iron horse created many opportunities, the railroad became the preferred conduit for trade, which irreversibly eclipsed the waterways with smoke in the process.

Slosek said when he was a youngster, the building was all but abandoned, save for a bait shop which rented boats and sold fishing gear. It wasn’t until the 1970’s that interest surfaced for restoration, and in 1974 the Market House was given a place on the National Register of Historic Places. Its model, the Washington House in Albany, was demolished in 1864, and was greatly outlived by its successor. While the “Black Hole” is a thing of the past, the former leaders of the state Senate and Assembly might see some shade soon. On a lighter and tastier note, Old City Hall Tavern and the Market Street Cafe still serves the goods, and maintain the tradition as a pouring out place for Oswego. Brunch, lunch, dinner, beer, spirits, trivia, open mic, live music, community, commotion… how’s that for historical continuity?

‘Aha’ to the Reality
UFO 2001: The Boomerang-Shaped Craft
To Top