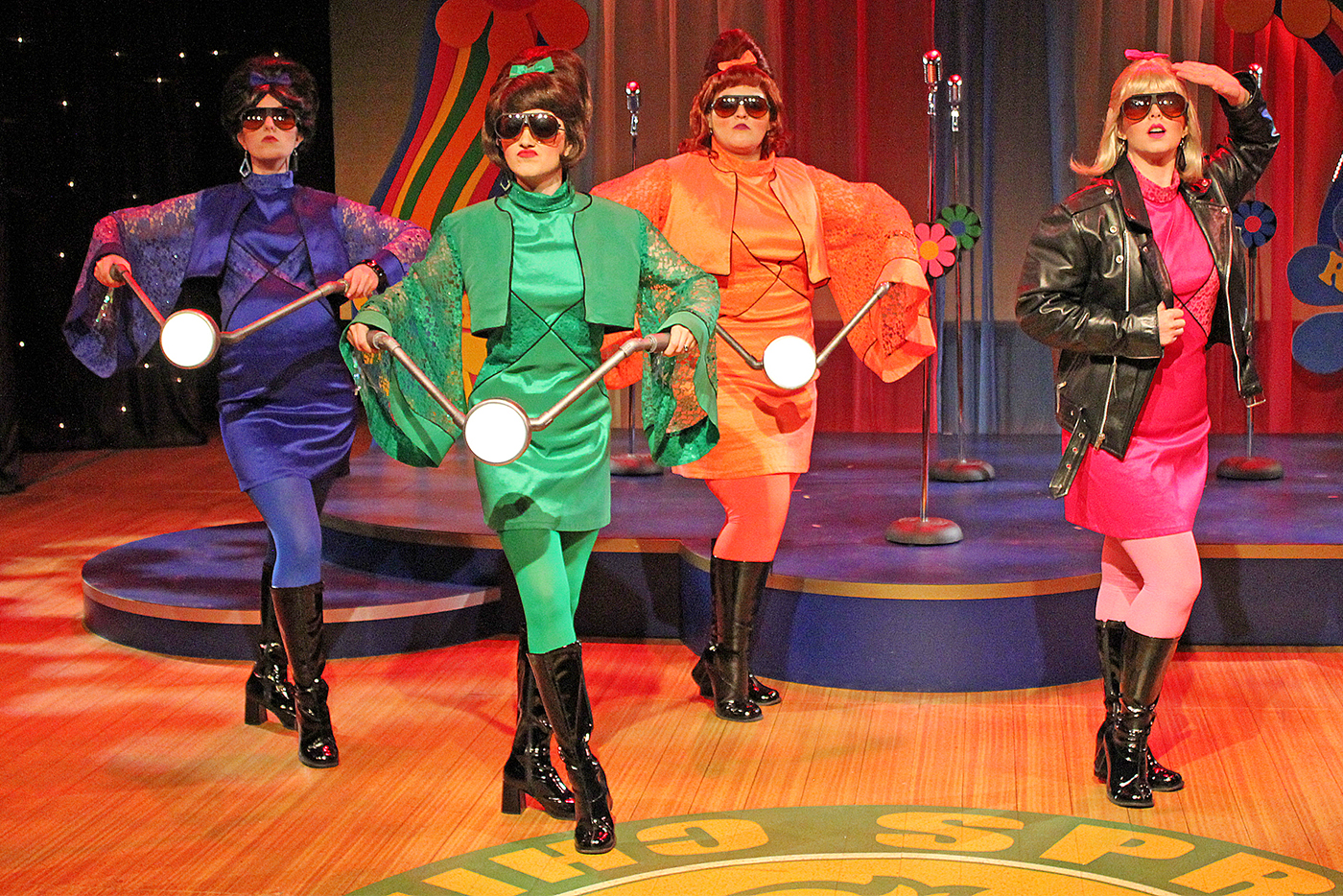 Nostalgia is a two-faced muse. On the one hand there’s that sweet longing for what has vanished from our lives. On the other is the sniggering laughter at what has become so unfashionable.

The 2008 musical comedy review The Marvelous Wonderettes, running through Saturday, Sept. 10, as Cortland Repertory Theatre’s summer finale, displays both sides of the muse. There are so many numbers, all or parts of 32, that audience members are kept busy remembering the lyrics ahead of the singers or calling out who sang them in the first place. As for comedy, Wonderettes cannot go 90 seconds without generating laughter, some of it uproarious.

Wonderettes looks as though Milwaukee-based creator Roger Bean examined the ubiquitous nostalgia-review comedies of the 1990s, such as Forever Plaid and The Taffetas, and wondered how he could do it better. First, rather than spoof specific extinct groups, like the McGuire Sisters, he now takes a group of gal pals at a high school in an unnamed Midwestern state. In 1958 they find themselves on stage unexpectedly because the boys’ group has been kicked out for smoking. This widens the types of music to be used, like George Goehring’s “Lipstick on Your Collar” or Neil Sedaka’s “Stupid Cupid,” originally performed as solos.

To vary the tempo for the second act, Bean moves the action forward to the ladies’ 10th-year reunion in 1968, without any reference to unseemly politics, or Elvis or The Beatles for that matter. Much of the visual humor in the shift can be credited to costumer Jimmy Johansmeyer. Each singer retains the same identifying color from one decade to the next, but their dresses are amusing caricatures of what women actually wore.

But the beat changes more than the clothes. In the first act’s opener, four small-town girls celebrate the white-bread innocence of “Mr. Sandman.” In the second act they move on to the cadences of urban blacks with John Hurley and Ronnie Watkins’ “Son of a Preacher Man” and Otis Redding’s “Respect.”

Playwright Bean’s exposition is so efficient that for the first 15 minutes we feel we’re watching a review and barely realize that four characters are emerging. First to catch our eye is blond Cindy Lou (Hannah Zilber), the best-looking girl in senior class who flaunts it. She exudes the sense of entitlement beautiful people demand. Her first-act solo, Jerry Leiber and Mike Stoller’s “Lucky Lips,” could be delivered by no one else. Although she matures into Cynthia in the 1960s, the next decade isn’t kind to her. Her disappointment hardens into punkishness and The Shangri-Las’ “Leader of the Pack,” done for comic effect with motorcycle roar and headlights.

The casting of plus-sized, spontaneous comedienne Joyana Loraine Feller alters the role of Cindy Lou’s antagonist Betty Jean (or “BJ”) from what she has been in other productions. The words in the script have them implausibly as “best friends,” but BJ is pinching and belting Cindy Lou in the first act before we have any idea why. Well, it’s her not groundless suspicion that Cindy Lou has stolen her boyfriend. Body size and body set are destiny. Feller can turn every little pout into an opportunity to steal the spotlight.

Nonetheless, the script provides Betty Jean with the longest arc in the second act, with a dead-end job in a lumberyard and a failing marriage to a loser. She takes on pathos with Van McCoy’s “That’s When the Tears Start” and the bitter “It’s My Party.” The antic streak never leaves Feller, however, as she plumbs the comic potential of a phrase like “Raw lumber.”

The other two singers are by no means supporting players. Bespectacled brunette Missy (Bridget Elise Yingling) initially looks like the take-charge bossy one. She wants to limit the others’ excesses, and in 10 years she will be a teacher. Musically, her numbers appear to be at odds with her character. Her first-act belting of “Secret Love,” the Doris Day hit, comes off a bit screechy. Surely, this is director Julie Tomaino’s decision, as Yingling, a Tisch School graduate, clearly has the chops. The dissonance makes a contrast with her second act’s blowout of “With This Ring,” which literally does stop the show.

Thin brunette Missy (Lizzy Miller) is first pegged as the ditzy one, sticking her wadded gum to the microphone and then retrieving it to blow perfect pink spheres. Ten years later, pregnant with her third child and tilting back as she walks, she gets the last word with “Respect,” the Aretha Franklin anthem.

Director Tomaino also serves as choreographer, with numerous sight gags and bogus missed cues. And music director Christopher Blasting leads an ensemble of five with hot rhythms of music that never went away.