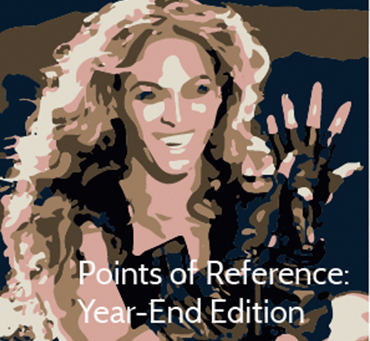 Beyonce released an album at 11 p.m. on a Thursday and the Internet collapsed.

POINTS OF REFERENCE is a music news blog for people with actual lives and/or short attention spans: a weekly selection of topical, pop music talking points fit for bars and break rooms. It’s divided into three sections: NEWS (duh), ALBUM RELEASES (once more with feeling), and STUFF AND THINGS (random, music-related crap from the internet). So, I’m all finished up here. Scroll down, won’t you?

“Southeastern” (Relativity), Jason Isbell’s fourth solo effort, is a concise record. The arrangements are sparse, melancholic. Isbell unfurls crystalline characters –– the cancer-stricken barfly; the repentant outlaw; the road-worn storyteller –– and sings with renewed vigor, a symptom of his recently-achieved sobriety.

Ezra Koeing and his cultured confidants lessen the lyrical excess and streamline the Afro-punk  melodies with “Modern Vampires of the City” (XL). Bonus points for the videos that accompany “Step” and “Diane Young.”

Londoners Jehnny Beth, Ayse Hassan, Fay Milton, and Gemma Thompson resurrect guitar-based post-punk on “Silence Yourself” (Matador), an 11-track set characterized by brooding tantrums (“She Will”) and feedback-fraught cacophonies (“Husbands”). Shout out to Corin Tucker and Kevin Shields whose collective creations brought this awesomeness upon us.

While much of “I Hate Music” (Merge) is classic Superchunk (hooky, brisk, melodic), darkness seems to tinge a few tracks, most notably “Me & You & Jackie Mittoo” and “Your Theme.”  Even after almost 25 years in the business, Mac McCaughan and crew are still transforming.

Like a smooth, single-malt scotch, Neko Case intensifies with time. And “The Worse Things Get…” (Anti-), Case’s sixth studio recording, contains some her most potent material. Case sketches vivid vignettes of road life (“I’m From Nowhere”) and long distance love (“Calling Cards”). “I am the man in the f****** moon / ’cause you didn’t know what a man was / until I showed you,” she sings on “Man,” the album’s third track.

The National, “Trouble Will Find Me” (4AD)

With their sixth release, The National find themselves on the cusp of a popular breakthrough. “Trouble Will Find Me” (4AD), which is nominated for Best Alternative Music Album at this year’s Grammy Awards, oscillates; waves of slow-burning sound mingle with Matt Berninger’s baritone self-reflections.

UFOs of Christmas Past
Revolutionary Times
To Top