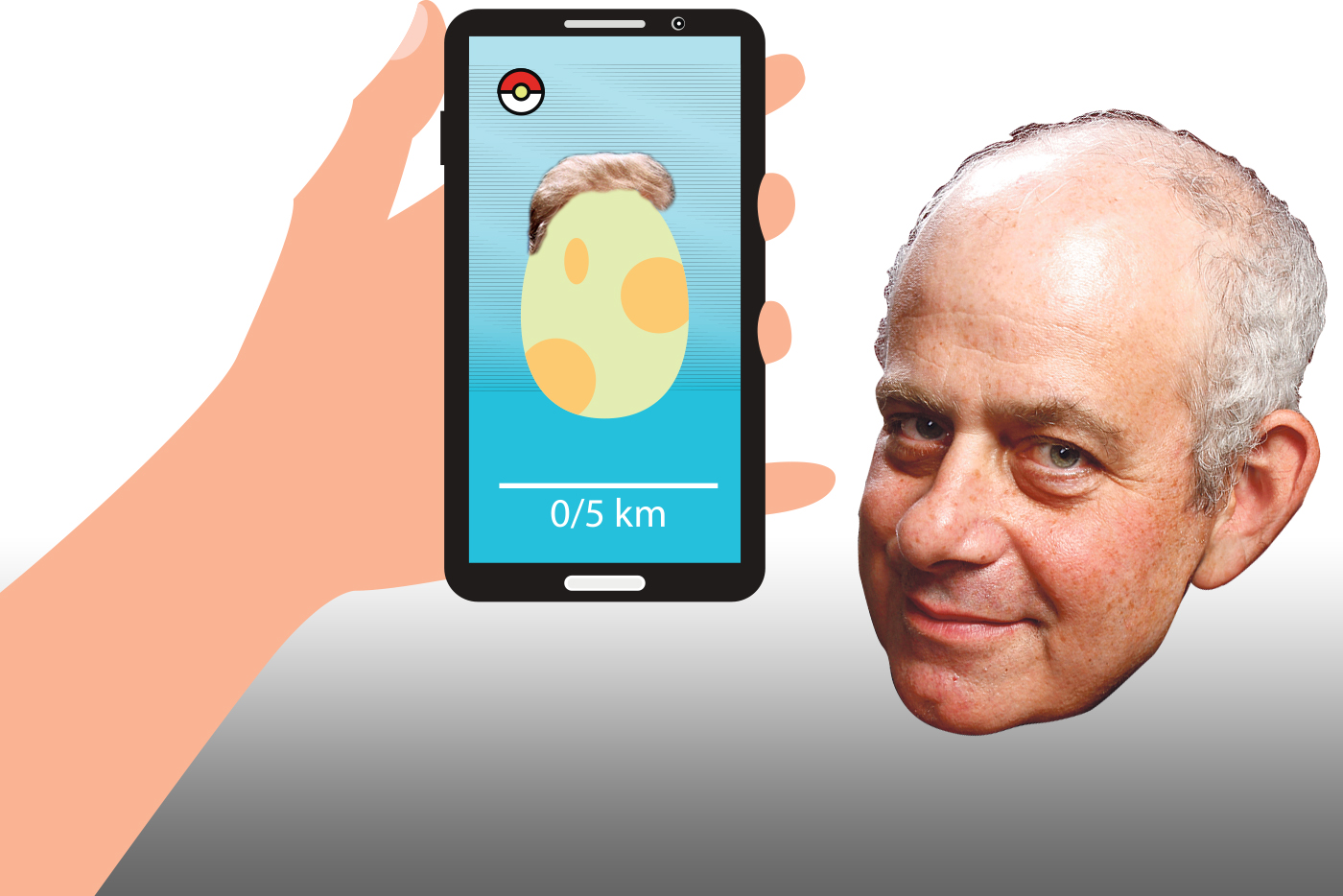 Pokemon Go would see sharp changes under the Donald’s rule.

Pocket Monsters For The Donald’s World

Big news, Pokemon Go fans! I’m getting word via Russian intelligence agencies via shady intermediaries via Wikileaks that major changes are in store for the popular augmented reality game if Donald Trump is elected president.

The most obvious change will be the name. The game will be called Poketyrant Go to better reflect the ideals of Trump and those who have influenced his leadership style.

Here’s a preview of the poketyrants we will search for locally starting in January 2017 if current polling trends continue: 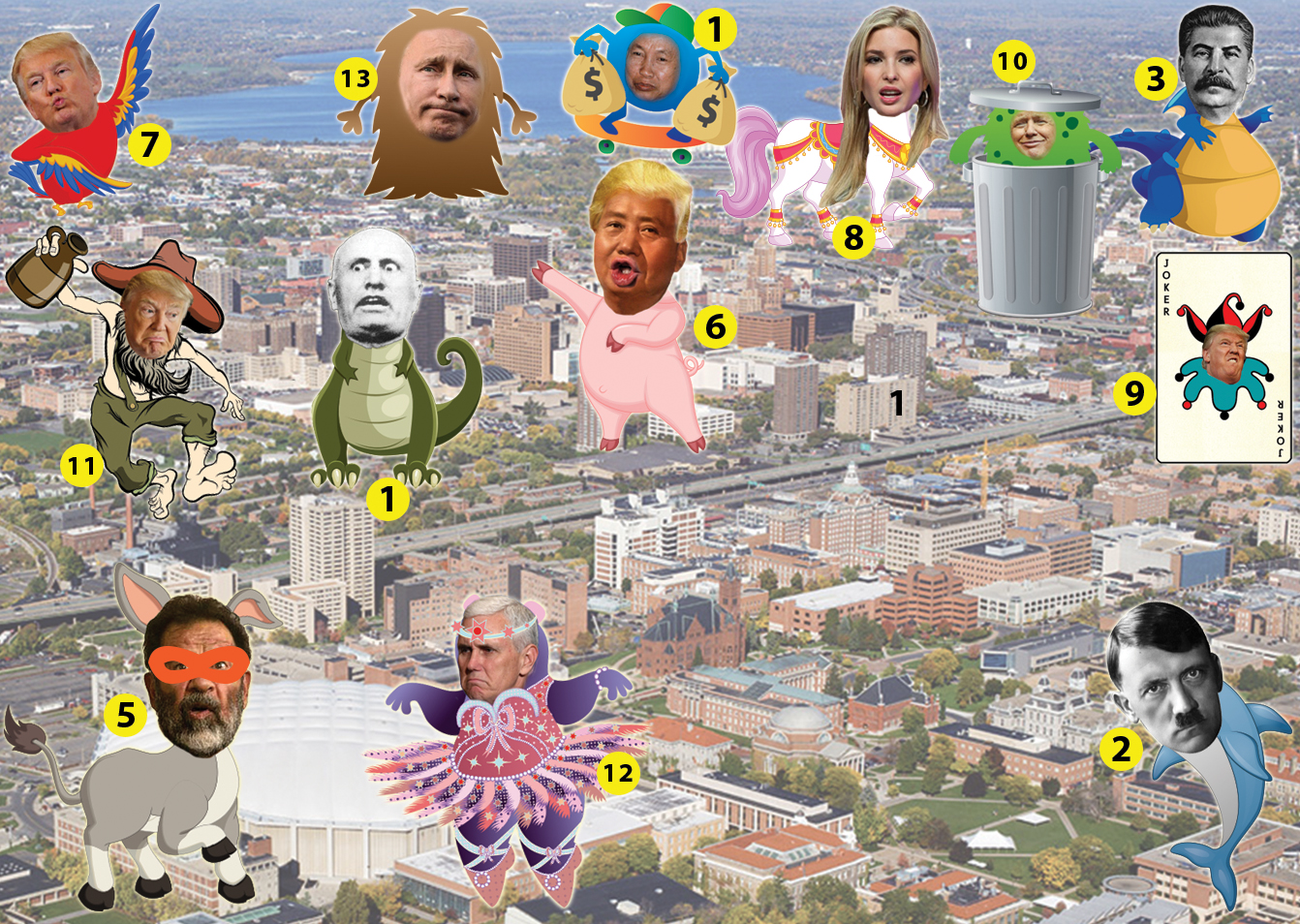 Italian dictator Benito Mussolini was the Science Guy of 20th-century Fascists, at least until he and his mistress were executed and hanged upside down at a service station. He believed science proved that God did not exist and that Darwinism justified brutality. This Mussolini-inspired poketyrant pays tribute to that spirit of discovery by scuttling about our landmark science museum. But be careful in your search. One of MOSTolini’s favorite tricks is to lure players into the Earth Science Discovery Cave and bombard them with Climate Change Denial Dust.

This finned poktyrant is neither fish nor mammal. It’s a maniscot, a hybrid between an Austrian-born lunatic and one of the most lovable team mascots in upstate New York: the Le Moyne College dolphin. Despite its whimsical appearance, Adolphin is so dangerous it cannot be captured by a single player and even then only if Adolphin’s bitter rival, StaLyncourt, is deployed. Approach cautiously from the west and east.

The hamlet of Lyncourt is home to this poketyrant, whose dark magic includes the ability to purge millions of players from the game without due process. His hangouts include ideological dead ends and cult-de-sacs of personality. StaLyncourt can be briefly disarmed by high-velocity flattery rays. Tell him that he is one of the tallest dictators that you’ve ever met, the same way that you’d tell Trump that his hands are quite large and that you are 74 percent certain he does not have a micro-penis.

Known to haunt the New York State Thruway, Toll Pot will rob you of your precious PokeCoin as soon as it enters your account.

The Donald’s favorite terrorist killer, former Iraqi strongman Saddam Hussein, inspires this masked poketyrant. Attractive as Saddam might look in retrospect, especially wearing orange, be smart and wear a pokegasmask as you head out to search for this beloved mass murderer.

Mau Zedong killed millions. Donald Trump’s Zedong is no doubt much smaller but still a force to be reckoned with. Thus was hatched DinoMau Trump-A-Que, a Yankee barbeque-themed virtual monster boasting the DNA of both leaders. Some credit to the game master, please. The current Pokemon Go game does not have a biracial sociopath that spews Wango Tango Sauce out of a dual ZeDong. This new version corrects that.

Can you capture this poketyrant before it fills a toxic concert venue with torch-wielding zombies chanting “Make America Great Again?” Probably not, but it’s fun to try!

She is beautiful, stylish and smart. Find her at our favorite taxpayer-subsidized mall buying fig leaves to cover her father’s contempt for the Constitution — and the people who will vote for him.

Donald loves casinos, especially when he leaves his investors (“losers”) holding the bag. To capture Turning Trump, you’ll first have to make the short trip to Verona. (Watch out for Toll Pot!) If you see a huge shirtless dancing guy claiming to play for the New England Patriots, just ignore him. It’s a hologram generated by Turning Trump to throw you off the trail.

The Trump Administration gives a sly acknowledgement to his real family name with this adorable poketyrant inspired by Oscar the Grouch. Trash Drumpf happily accepts asbestos and radioactive materials.

When this poketyrant gets his Irish up, innocent gamers get deported.

It might sound unfair that there’s one poketyrant who locks up the phones of gay players only. But that’s what makes Pense-ive Mike extra creepy — and the only probably gay poketyrant in the collection.

Trump salutes his new bestie, the Russian dictator Vladimir Putin, with this ruthless poketryant who cavorts among the floating semi-solids at the sewage treatment plant on Hiawatha Boulevard.