The pun in the title of August Wilson’s The Piano Lesson is a signal that of all the plays in his “Pittsburgh Decalogue,” it has the most to teach.

The child in the Hill District household, Maretha (Marcea Bond), is indeed learning how to master the keyboard. The greater lesson is what is to be learned from the heavily engraved piano, a bitter legacy from slave times. Strong-willed Berniece (Erika LaVonn), a niece in Doaker Charles’ home, still cherishes all that the piano represents.

A Pulitzer Prize winner in 1990, The Piano Lesson is long on exposition, in both the first and second acts. For all its magical realism and ghosts, it is the easiest to grasp of the 10 Wilson plays. Its metaphors and allegories are transparent, and meaning lies close to the surface.

In 1936, the depths of the Depression, poor men had to hustle to turn a penny. Assertive, 30-year-old Boy Willie (Stephen Tyrone Williams) and his shy friend Lymon (Yaegel T. Welch) have driven up from Mississippi with watermelons (symbolism noted) for sale from a rickety truck. He heads for his older sister Berniece, who still blames Willie for the death of her husband Crawley. She also thinks the young men may have stolen the truck.

Hearing that the white farm owner, Sutter, has died, Berniece assumes that Willie may have killed him as well. Sutter’s death, however, means that the heritage property is now for sale. This prompts Willie to argue that the siblings should sell the marvelous piano to buy the farm where they were sharecroppers, and before that, slaves.

All Wilson plays are as much about their decade as they are about their characters. In the 1930s an abandoned farm in Mississippi would be literally dirt cheap. Slave times are at the edge of living memory, only 70 years previous. In a decade before the great post-World War II northward migration, blacks fresh up from the South seemed to come from a different country and speak a different language. Characters living in Pittsburgh, even at the lower reaches of society, already sound Northern. This includes Berniece; her wise uncle Doaker Charles (Derrick Lee Weeden); the gambler Wining Boy (G. Valmont Thomas), Doaker’s comic older brother; and Avery (Ken Robinson), a preacher and Berniece’s would-be suitor.

Stressing authenticity, director Timothy Bond has coached actors Williams (Willie) and Welch (Lymon) to honor the poetry playwright Wilson ascribes to unassimilated Mississippi speech. Here, however, the genuine vowels and syllables are going to be a challenge for some Syracuse audiences to comprehend, even though Williams has performed Shakespeare and was nominated for a Syracuse Area Live Theater Award when he appeared here in Wilson’s Fences (May 2010). 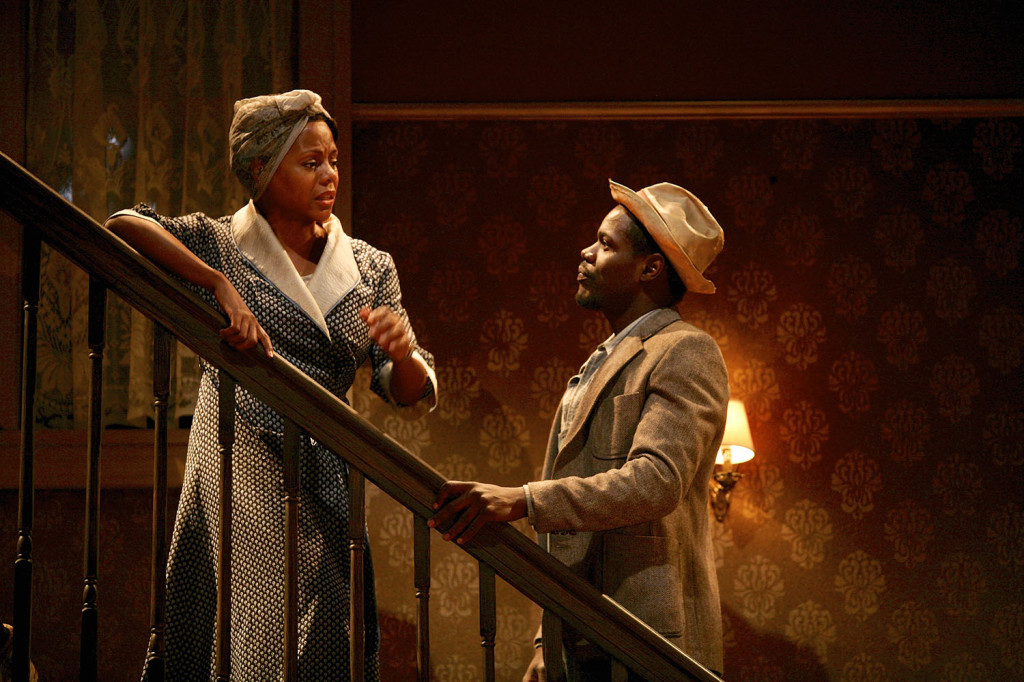 Much of the play’s genuine tension derives from all that exposition, especially when it is delivered by Pittsburgh-area characters. It falls to the benign Doaker to explain that the piano was originally purchased with payment in slaves, human chattel, “one and a half niggers.” The sadism and degradation of slavery are often revisited in African-American literature, much as the Holocaust is among Jewish writers, but Wilson’s depiction of this episode is especially plangent, even if we do not witness it. We do see at stage left that actual piano gained in the flesh-for-commodity exchange.

We could have grasped the symbolism of the piano without Wilson’s having hammered it home. If we know anything about black America it is the centrality of music. In the first act’s most moving scene, all the men, from Pittsburgh and Mississippi, join in a deeply rhythmic work song remembered from the Parchment Prison Farm, fusing history, art and identity.

In his curtain speech, director Bond uncharacteristically expressed his love for the play, putting his hand to his heart. Bond’s commitment is best expressed in Erika LaVonn’s glowing, defiant Berniece, one of Wilson’s best women, and G. Valmont Thomas’ hilarious but morally ambiguous Wining Boy. Piano’s lesson, however, must run a long trek. The 1995 TV-movie film version by Wilson loyalist Lloyd Richards sprints at 95 minutes. Syracuse Stage’s version, with an intermission, clocks in nearly twice as long.