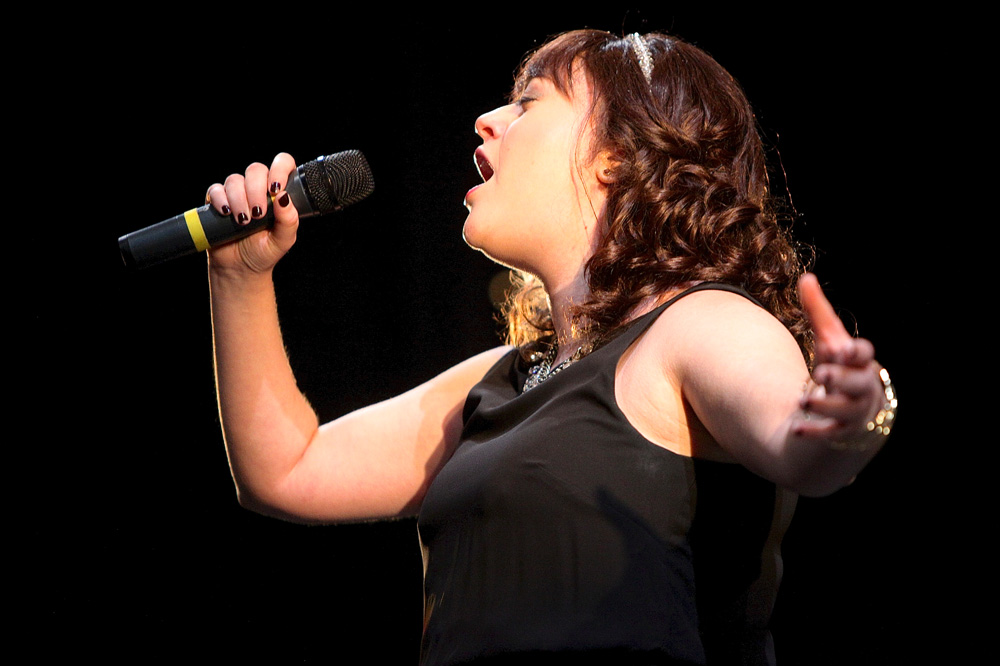 Professional and community theater standouts gathered at the 2016 SALT Awards.

The evening began with returning co-hosts Abel Searor and Rita Worlock in wiseacre mode. Searor took note of last year’s Syracuse New Times reference that the 2015 edition “sometimes felt like what would happen if the Tony Awards were being handed out during a tractor pull,” so he appeared in pink coveralls and a cowpoke hat. Meow, kitty’s got nails! Both Searor and Worlock were also displaying king-size signs featuring Rita’s kisser, a recent Facebook gag that Worlock’s fans surely understood.

The 2 ½ hour shindig, down from last year’s kiester-numbing three hours, featured two amusing running gags. The first one featured Syracuse Stage general manager Jon Wilson, who actually ran onto the Great Expectations stage to whisk away the company’s numerous awards for productions, such as To Kill a Mockingbird and Baskerville: A Sherlock Holmes Story. Wilson claimed afterward that he must have dropped five pounds following all those sprints to the stage.

Meanwhile, the SALT Academy made some amends following the 2015 snubs of the Ithaca-based troupes Kitchen Theater Company and the Hangar Theatre. Kitchen nabbed honors for Peter and the Starcatcher, while Hangar’s major production of In the Heights could not be overlooked. Still, the area’s summertime professional companies faced tough SALT sledding against the hometown tsunamis of Syracuse Stage and the Redhouse Arts Center. Cortland Repertory Theatre scored a single award for The Marvelous Wonderettes, while Auburn’s Merry-Go-Round Playhouse came away empty-handed.

SALT perennial winner Garrett Heater added more hardware to his mantle with costume design and director wins for Covey Theatre Company’s Lizzie Borden Took an Axe, which he described as “immersive theater” given the show’s frequent mountings at the Barnes-Hiscock Mansion. Heater’s other outfit, Syracuse Summer Theatre, earned awards for Cabaret, including supporting actor C.J. Roche and choreographer Jodi Bova-Mele. Cabaret star Sara Weiler also sang the show’s title track, and she just about blew the roof off the joint with her soaring rendition.

Poignant moments were sprinkled throughout, from Kara Greene’s joy regarding her return to acting as part of Appleseed’s Steel Magnolias, to the In Memoriam segment that paid tribute to the late Mary Siracuse and David Walker, as well as the Pulse nightclub tragedy. Central New York Playhouse artistic director Dustin Czarny was again peering through sunglasses; maybe he’s resting his peepers so he can count votes with the Board of Elections.

Following the shambles left by the 2015 rowdy crowd, Syracuse Stage wisely doled out sippy cups to the imbibers of this year’s SALT audience. And whenever the night started to flag, the co-hosts were there to perk up the proceedings. Abel Searor has a flair for low-key drollery, even to the point of imitating Jack Benny’s hand-on-chin expression. Which brings us to the evening’s second running gag, as Rita Worlock scored laughs every time she uttered the title of Syracuse Stage’s Stupid Fucking Bird. It’s a good thing there wasn’t a swear jar in the lobby.