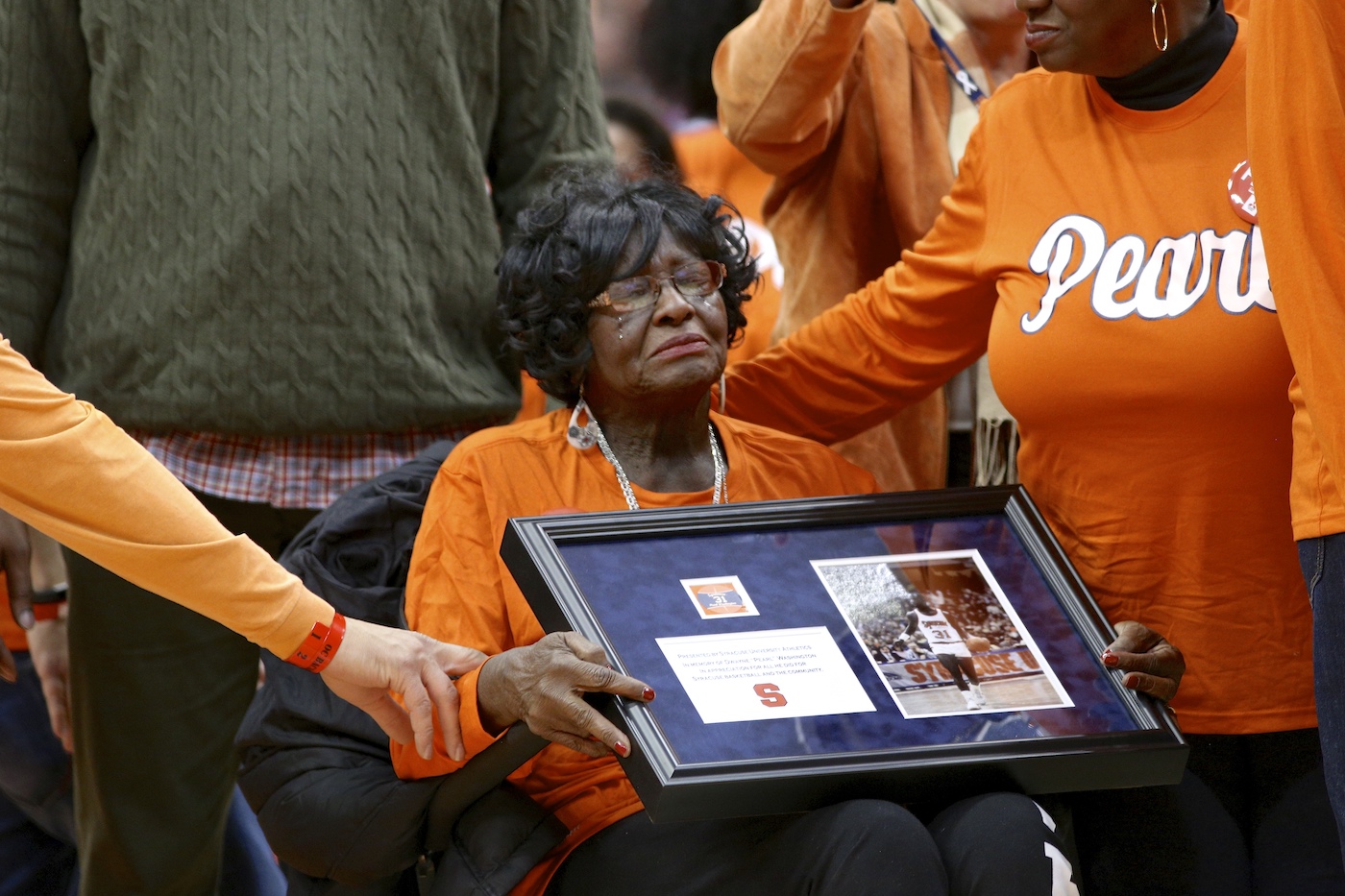 It’s been a topsy-turvy few days for the men in orange.

To paraphrase the Counting Crows’ song “Long December,” the Saturday, Dec. 17, renewal of the once-fierce Georgetown-Syracuse University basketball rivalry was “all a lot of oysters, and one Pearl.”

You may like oysters, but you get the idea: If it wasn’t Pearl Washington Day at the Carrier Dome, Saturday would have been a complete bummer because this is turning into a long December for the Orange.

A middling Georgetown team picked to finish fourth in the 10-team Big East Conference grabbed hold of the game midway through the second half and didn’t let go as the Hoyas shocked SU 78-71 before 25,131 fans. It was the largest on-campus crowd of this college basketball season and a total that, naturally, had to include “31” as a nod to Pearl. 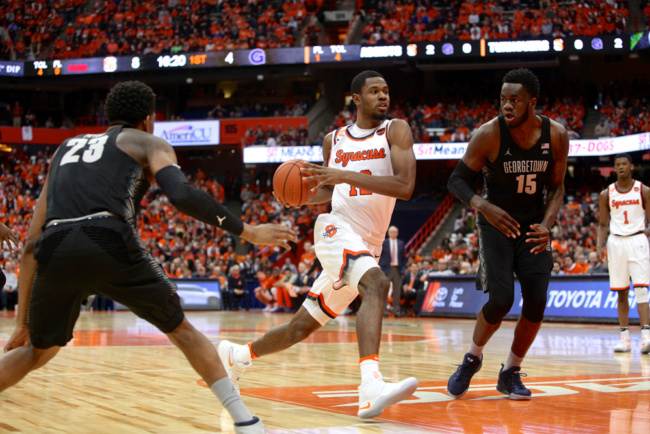 An Orange squad that Coach Jim Boeheim said before the season “is the best team we’ve had in a long time” and started the year ranked No. 19 in the country suffered a fourth non-conference loss for just the third time in Boeheim’s 41-year tenure. At 7-4 following the Monday, Dec. 19, 105-57 romp over Eastern Michigan and entering the Wednesday, Dec. 21, game against St. John’s at the Dome, the Orange will likely need to do better than last year’s 9-9 Atlantic Coast Conference record to have a shot at the NCAA Tournament.

“Everybody knows what we have; we just have to live up to the expectations,” said point guard Frank Howard, who entered the Georgetown game leading the ACC in assist-to-turnover ratio but had six turnovers and four assists. “Everybody’s not clicking at the same time. At this point, we’ve got to put everything together. We’re not going to quit.”

The Orange players were clearly disappointed to lose on a day when Syracuse athletic director John Wildhack unveiled Pearl’s already-retired No. 31 in the block “S” that sits in the middle of Jim Boeheim Court. “I wish we could have got a win for him,” Howard said, softly.

Video tributes to Washington played throughout the game, and the halftime ceremony featured many of Pearl’s former teammates presenting each member of Washington’s family with a framed photo of Pearl that also included a piece of Jim Boeheim Court.

Washington died last spring from brain cancer. This past Saturday was a celebration of his life and impact as his electric style of play helped usher in the golden age of SU basketball and the Big East.

“What he was is right in front of us, every time they open the doors at the Carrier Dome,” said NBC sports broadcaster and SU alum Mike Tirico in the halftime video tribute.

Understandably, Boeheim was subdued about the Pearl festivities after the game. But the halftime video tribute included this Boeheim nugget: “I can’t describe Pearl Washington to you. You had to see him. It’s just one of those things.”

The tribute to Pearl softened the blow of the loss but didn’t erase the growing list of problems that Syracuse needs to resolve before starting ACC play Jan. 1 at Boston College. Here are a few of those “oysters”:

[bullet] Sophomore Tyler Lydon had his best game with a career-high 29 points on 12-for-13 shooting and a team-best nine rebounds. But the rest of the team shot just 30 percent (13-for-44), SU was outrebounded 41-30, the Orange missed 11 of 25 free throws, and point guards Howard and John Gillon combined for 7 turnovers and six assists.

“If Tyler Lydon doesn’t have an unbelievable game, we lose by 15,” Boeheim said. “One guy can’t do it. We’re not getting play out of enough guys.”

More disturbing is that Georgetown guard LJ Peak said the Hoyas “wanted it more, so we came out on top.” That’s an often-used cliché, but maybe there’s something to it when you look at the “hustle” areas of defense and rebounding.

“Defense and rebounding are really killing us,” Gillon said. “And when we play a good (defensive) possession, they get a second-chance shot and they throw up a three and that really kills us.”

Boeheim’s “best team in a long time” comment was based on the apparent depth of this team entering the season. But the Orange is down one as Boeheim said reserve center Paschal Chukwu will be “out for a long time” following surgery Saturday to repair a torn retina in his right eye.

Freshman guard Tyus Battle, who had started SU’s three previous games, did not start Saturday because of a nagging foot injury that limited his practice time during the week. After playing 12 minutes against the Hoyas, Battle played 23 minutes and scored a team-high 18 points against Eastern Michigan as all eight scholarship players who played reached double figures for SU. 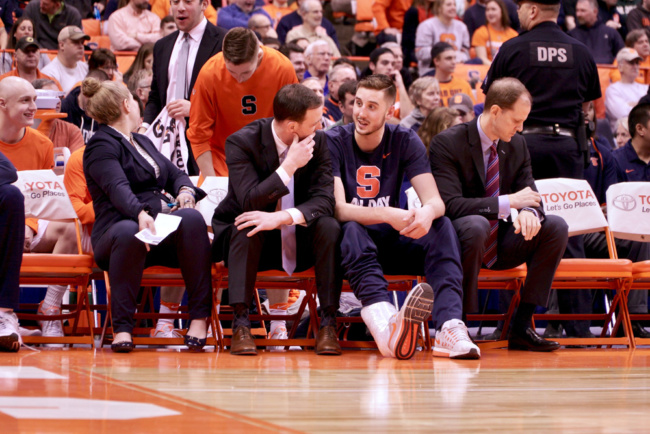 Tyler Lydon sat out the second half of Monday’s win against Eastern Michigan with a strained Achilles. Photo by David Armelino | Syracuse New Times

On Monday, Lydon left the game late in the first half with a strained right Achilles. He did not return to the game, but the injury does not appear to be serious. Still, with Chukwu out and senior forward Tyler Roberson still trying to climb out of Boeheim’s doghouse, a long-term injury to Lydon, Battle or another scholarship player would be a devastating blow to a team that isn’t as deep as we thought.

All is not lost, but to quote Yogi Berra, it’s getting late early for SU’s NCAA Tournament hopes. Last year’s team went through a 4-7 stretch that included non-conference losses to Wisconsin, Georgetown and St. John’s and still reached the Final Four. But that team had two impressive non-conference wins in its back pocket (Connecticut and Texas A&M) and earned a few crucial ACC wins (Duke, Notre Dame) to bolster its resume.

Without any notable non-conference wins, the Orange needs to do all its heavy lifting in ACC play. The good news is that SU will have plenty of opportunities as it will play seven league games against current top-25 teams (Duke, North Carolina, Louisville twice, Virginia, Notre Dame and Florida State), and four of those games are at the Carrier Dome.

“We’ve still got a lot of basketball left,” Lydon said. “Just keeping pushing through it. We have to keep sticking together and keep our heads up.”

Through Jan. 30, you can purchase a Pearl Washington mini-jersey at any Kinney Drugs in New York state and write a short tribute to Pearl and sign your name on the jersey. The jerseys will be displayed at the store, and all proceeds will go to pediatric cancer research through the Jim and Juli Boeheim Foundation.