All is not as it appears with Planet Aid, a nonprofit firm that flunked out on the American Institute of Philanthropy Web site.

If you are wondering what all those yellow Dumpster-like bins popping up on Syracuse street corners mean, they belong to Planet Aid, a 10-year-old Massachusetts-based not-for-profit. Forty boxes have been placed in parking lots and along sidewalks, another four in outlying areas of the county. The big sign on the boxes says “Clothing/Shoes” but the organization doesn’t give away clothes or shoes to anyone. It sells them. The smaller print on the boxes tells the diligent donor that Planet Aid sells the donated goods to fund its projects around the world. According to Central New York operations manager Matt Metras, clothing collection is simply the fund-raising mechanism for the organization. Its mission, if its projects are any guide, is helping people in sub-Saharan Africa and other poor parts of the world escape poverty.

But the group’s sudden unannounced arrival and its mimicking of the tactics of other long-established local charities have raised some eyebrows. According to spokesman Paul LaDolce, the Rescue Mission has nothing to do with Planet Aid, and he did not know they were coming to town until he saw the boxes. Workers at the Rescue Mission warehouse interviewed by telephone were upset by the boxes and claimed they were seeing a downturn in their own donations since the yellow boxes started to appear. According to Tim Clements, Rescue Mission Operative Manager, “Everything that gets donated to them would have gone to other organizations.”
Metras, who worked at Kodak until his job was outsourced earlier this year, said the drive in Onondaga County has been quite successful for Planet Aid; the agency has 8,500 bins nationwide. In the first three weeks of operating here they collected nearly seven tons of clothing, according to Metras. He acknowledged that he did not contact local non-profits already involved in recycling used clothing. “We don’t see ourselves as competing with them,” he said by telephone from Rochester. “Statistics show that only 15 percent of textiles is recovered from the waste stream.”

Once a week the clothes are collected and sent to a warehouse in Rochester, where they are sorted and then sold to a secondhand clothing grader. In this case the purchaser is Jose Montes, of Elizabeth, N.J. Montes’ company, Monitex, sorts the clothing by quality, then ships the bulk of it to his native Chile, where his affiliates sell it on the commercial market. His profit-driven enterprise fills the coffers of the not-for-profit Planet Aid.
This is not that unusual in the nonprofit world. The Rescue Mission, Goodwill and Salvation Army operate in a similar fashion. In fact, many would argue that selling such goods is better for the local Third World economies than simply dumping a large quantity of free goods.

What is controversial is the way Planet Aid accounts for its expenses. It classifies those related to clothing collection as a program expense, when in the view of most accountants they are more properly considered fund-raising expenses.

This legerdemain allows Planet Aid to claim that 30 percent of its revenue goes to support projects. On the Web site of the American Institute of Philanthropy, Planet Aid is given an “F” rating because only about 31 percent of spending goes to programs and services. Institute president Daniel Borochoff said that Planet Aid pays about $73 to raise each $100 it collects. The institute ranks charities as favorable if 60  percent of their spending goes toward programs and services.

Actually, Planet Aid runs no programs. They rely on a partnership with Humana People to People, an international consortium started in Denmark in 1977, which has its own checkered history. Federal tax records show that Planet Aid paid a fee of more than $271,000 to Humana People to People last year. Metras said the biggest projects are HIV prevention in Africa, training elementary school teachers and supporting Farmers  Clubs, which teach farmers to improve yields with available technology. 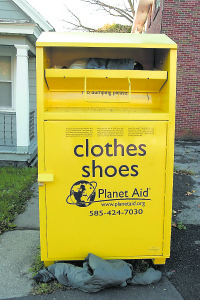 Humana People to People was founded by Danish teacher Mogens Amdi Petersen, who eventually fled Denmark under indictment for tax evasion and fraud, and resurfaced in the US in 2001. During his exile Petersen lived a life of luxury on a private island near Miami, according to some, living off funds donated by the Teachers Group, a Humana subsidiary in which members pledged their salaries to the organization and worked on humanitarian projects. Petersen was extradited to Denmark, and eventually acquitted of all charges. Planet Aid is one of more than a hundred groups that have spun off from Humana People to People. Other trade names used in their clothing drive efforts include Gaia and Living Earth Green World Action.

Planet Aid also pays top dollar for public relations; they use Rasky Baerlein, the same firm the Boston Red Sox has hired. All that money didn’t buy much real expertise, however, since the big-time PR guys sent the New Times a list of boxes in the Syracuse University area, and included one at the Expressway Mart on South Salina Street, more than a few stone throws from Marshall Street, and not a scene oft-visited by the sorority set. A clerk at that store, when visited last week, knew little about the box, except that it appeared one morning, and the people “give the clothes to people in some other countries.”

There are three boxes within six blocks of one another along South Salina Street. One of them is in the parking lot of the office building that formerly housed the medical practice of Dr. Jennifer Daniels, who had her license to practice suspended from 2001-2003, ran unsuccessfully as Green Candidate for Syracuse City Mayor in 2001, then became an ordained minister and currently runs a healthy living company. In a telephone interview, Daniels said that she was contacted by Planet Aid, and they offered to make a donation to her favorite charity in exchange for placement of the box. “When I saw how ugly it was, I called them up and said ‘no, no, no, you have to move it.’” Planet Aid moved the box to a far corner of her lot, which she is currently in the process of selling. According to Metras, Planet Aid will pay $25 monthly to Dr. Daniel’s fund to provide scholarships to city students.

Not all businesses ask for donations, but Planet Aid does offer them to those willing to donate the space. A second box is at the Salina Shoe Salon owned by former county legislator and real estate agent Amatullah Yamini. Yamini could not be reached for comment.

Erectile Dysfunction in a Chihuahua?
To Top