If you’re still reading this column after six hours, contact a doctor.

It takes a lot to lure someone as lazy as me out of retirement, but Syracuse New Times Editor-in-Chief Larry Dietrich did his research. In touting the creative freedom I’d enjoy here as a humor columnist, Larry enthused, “We used {the f-word} in a story. And didn’t giggle about it.”

Everyone has their price. Permission to drop an occasional f-bomb in print is my version of winning the lottery. For 35 years, I have battled a secret society of media moralists who insist that every word in a newspaper must be suitable for a sheltered, dull-witted child of 6. My first brush with the Taste Police came as a columnist for the student paper at Nathan Hale High School, in Seattle. “That sucks,” I wrote. (I no longer recall what sucked, but it must have sucked royally.)  I was summoned to the principal’s office and told never to use that word again.

Three decades and three times zones later, I was still writing for a publication that refused to acknowledge that anything or anyone could suck, but I never dreamed they’d ban a legitimate use of the term “Chihuahua penis.”

It happened three summers ago. A sensitive, informative column I wrote about our half-Chihuahua’s junk becoming stuck in the deploy mode during a family vacation never saw the light of day. It was explained to me that the readers of Central New York would not countenance references to an erect Chihuahua penis with their morning coffee and bagel. (See the original column at syracusenewtimes.com.)

I disagreed then and now. I believe Central New York is a mature, sophisticated place that is fully capable of joining in a penetrating regional dialogue regarding a Chihuahua penis emergency.

I believe there is nothing wrong or perverted or “bad” about a Chihuahua penis.

Furthermore, I believe a healthy society does not shrink from defending its most vulnerable members, including small dogs with life-endangering permaboners.

It turned out that Rondo, a.k.a. Colonel Chubby. had his annual wellness exam last week at Stack Veterinary Hospital, Onondaga Hill. Rondo’s history came up. His primary vet, Kathy Congel, said that the condition, known as a prolapsed penis, is no laughing matter. “If you catch it early it makes a huge difference. In some cases, they don’t even know it’s happening. They’re kind of blasé about it.” 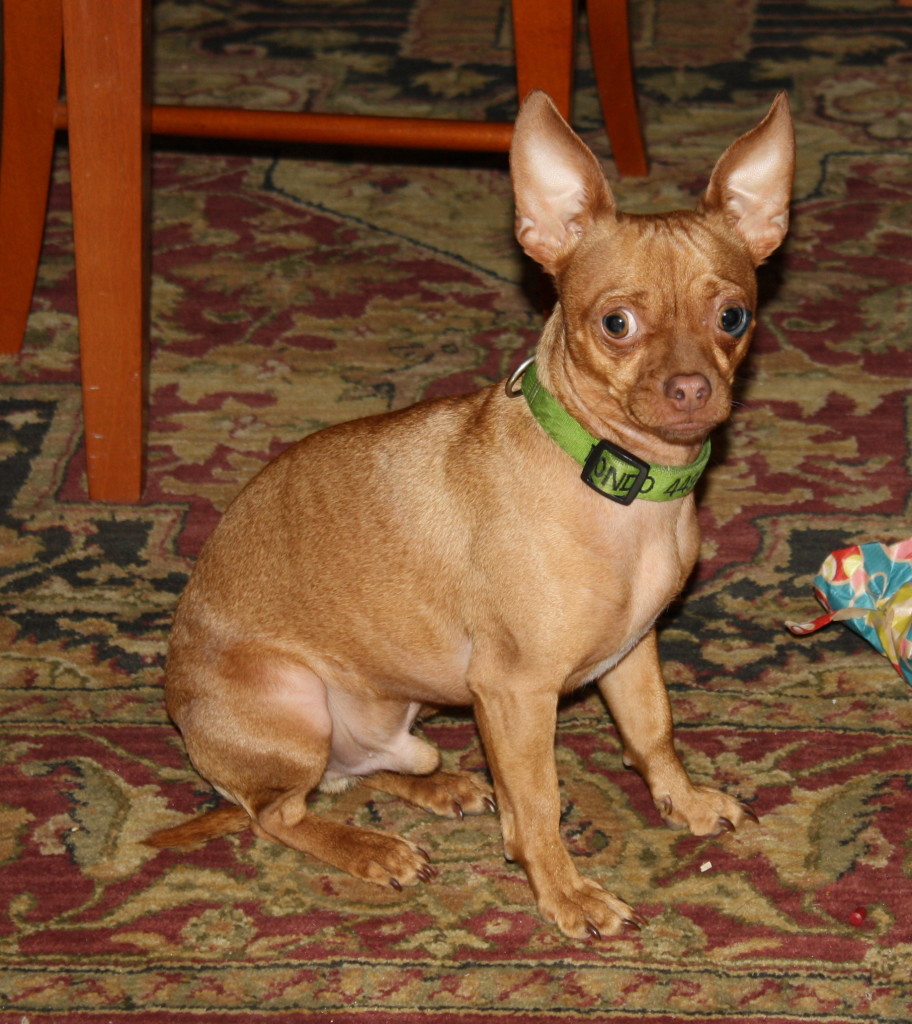 There is no cure, only years of counseling.

Actually, applying sugar, Congel said, will draw out the excess fluid so the appendage can be returned “home.”

After two years in the wilderness, my column has found a home, too. Truth is, I’m not as edgy or “alternative” as some New Times readers might prefer. I have a nice home in the ’burbs, two adorable young daughters and a 1969 gas-slurping Buick. I have good medical insurance and an artificial left knee.

And while it’s great to know I can use the f-word in a column, it might never happen. It’s not my style. For me, it’s thrilling enough to see “Chihuahua penis” in print. Words cannot express how grateful I am to my new employer for allowing me to use that phrase, which–once again–is “Chihuahua penis.”

There. My first New Times column is done, and it wasn’t even hard.

The Post Standard Spiked Kramer’s Column. What Did It Say?

Editor’s note: This is the column about Rondo that did not run a few years ago in The Post-Standard.

Normally, I like to keep it light in this space, but now and then a topic pops up of such urgency that the public’s health and safety must take precedence over entertainment. Such is the case today as I’m ethically bound to discuss a life-threatening medical emergency known as canine paraphimosis.

Earlier this month, we were on a family vacation in Massachusetts when the smaller of our two shelter dogs, Rondo–a buff, Chihuahua-like animal–experienced what veterinary texts describe as the “red rocket” becoming stuck in the “cleared-for-liftoff position.”

To a lesser degree, this is nothing new. During the two years since we adopted Rondo, we’ve learned that the passionate Chihuahua nature isn’t easily tamed, even by neutering. It’s not unusual for us to be watching a ballgame on TV or an episode of Project Runway and look down to see Rondo, all 13 pounds of him, having his way with our larger co-dog, Larry, whose befuddled expression suggests he’s holding a canceled ticket to see Bret Michaels perform at the Regional Market.

But this time E.T. wouldn’t go home, even after several hours. Credit my 10-year-old daughter, Miranda, for realizing that it had gone on long enough.

At this point, astute readers might be wondering where was I during this family drama. Well, I was holed up in a coffee shop in Great Barrington, Mass., with no cellphone reception, thinking deep, important thoughts. The first I learned of the crisis was when I walked outside and received a text message from Leigh that read,  “Rondo’s penis is OK,” which confused me a great deal.

I subsequently learned that Leigh had phoned the nearest VCA clinic and was advised to bring in Rondo ASAP. The staff even agreed to keep the clinic open past the 5 p.m. closing time in anticipation of Rondo’s arrival via high-speed minivan.

Dr. Vicki June, a 1995 graduate of Cornell Veterinary College, drew the short straw. Although accustomed to seeing the condition in horses, Dr. June had never before encountered a prolapsed Chihuahua penis. Untreated, the condition can be lethal, as circulation to the affected zone is compromised. Another, more serious side effect, in Chihuahuas, is severe grouchiness.

Upon arrival at the clinic, Rondo was given a steroid shot . Then it was go-time. I don’t know exactly what went on between Dr. June and Rondo in the treatment room, but I can confirm that a commonly sold “personal lubricant” was deployed. “Actually, he was a very good patient,” Dr. June reported.

We were lucky. It was a happy ending. I mean it was a successful resolution. Rondo came bounding into the lobby wagging his tail–and nothing else.

I only hope that this account of our ordeal contributes to heightened public awareness. If you or your Chihuahua get stuck in party mode for an hour or more, it’s no laughing matter. Turn down the Bret Michaels and get help immediately.