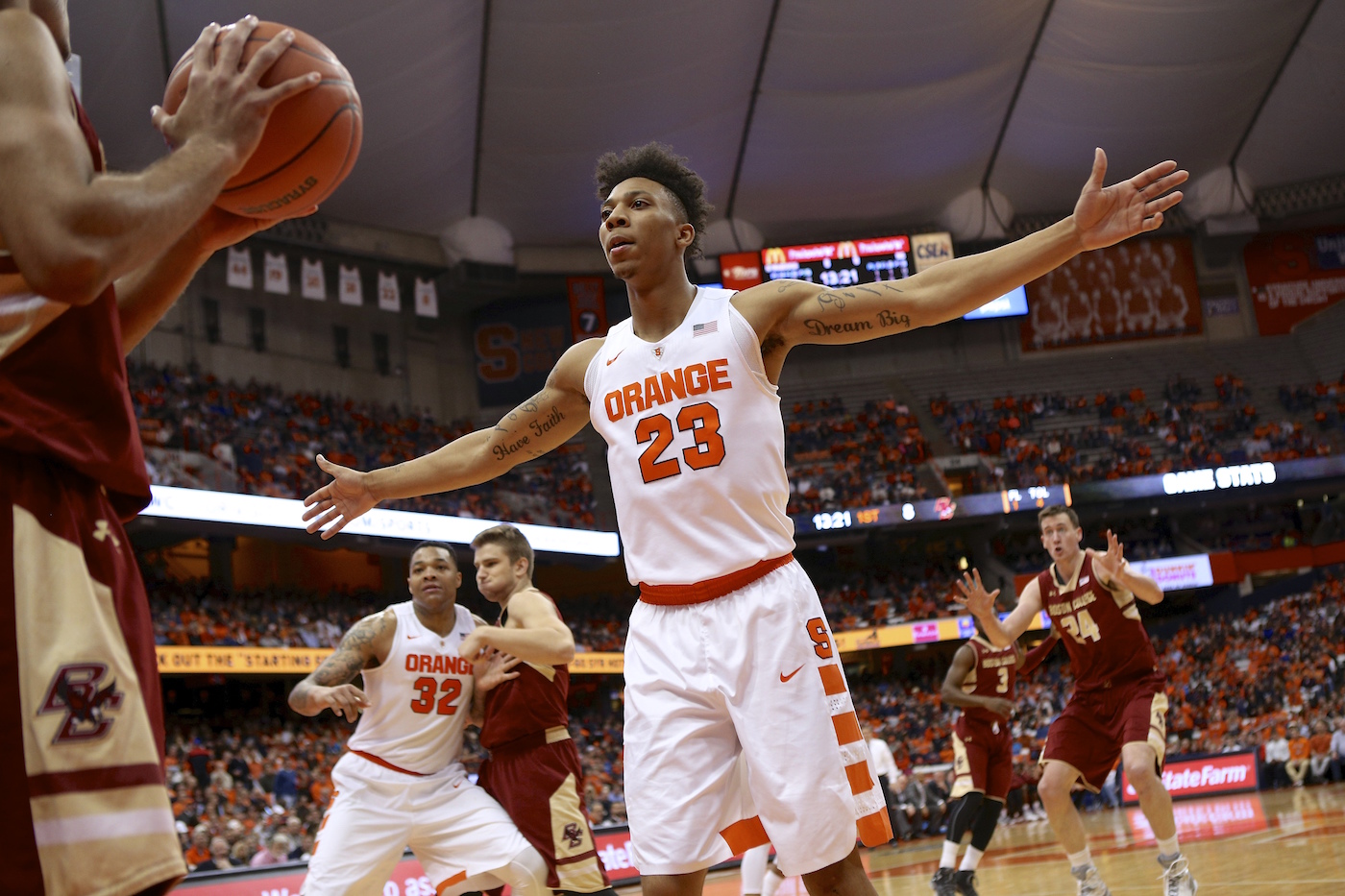 Change is happening at SU for better or worse.

While waiting for Syracuse University to hire an athletic director who will hopefully stick around long enough for the paint to dry on the Carrier Dome renovations, let’s catch you up on other SU sports news: 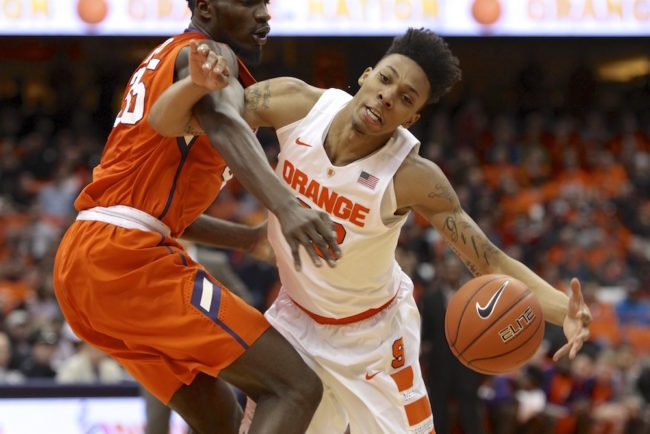 Malachi Caught in the Draft. Malachi Richardson, the precocious freshman guard who averaged 13.4 points per game and played a key role in the SU men’s basketball team’s run to the Final Four, will not return to Syracuse next season. Richardson signed with an agent, meaning he’ll remain in the June 23 NBA draft.

With Richardson leaving and the graduation of guards Michael Gbinije (17.5 points per game) and Trevor Cooney (12.9), the Orange will lose more than 60 percent of its scoring from last season. College basketball has evolved into a guard’s game, so SU will rely heavily on returning point guard Frank Howard, freshman Tyus Battle and Colorado State transfer John Gillon, a solid 3-point shooter whose arrival a few weeks ago was a giveaway that Richardson was going pro.

With guard Kaleb Joseph transferring to Creighton and center Chinonso Obokoh transferring to St. Bonaventure, the Orange still has a scholarship available and appears to be in the mix for Taurean Thompson, a 6-foot-10 senior power forward at Brewster Academy in Wolfeboro, N.H. Thompson, rated the No. 75 recruit in the 2016 class by ESPN.com, is reportedly considering Michigan State, Seton Hall and SU, with Michigan State the favorite.

Boeheim on Media Chatter. The news that Richardson was turning pro coincided with his rise in many mock drafts. ESPN draft insider Chad Ford reported that he expects Richardson to be selected from No. 12 to 20 — a prediction that rankled SU coach Jim Boeheim.

Raze the Roof. Syracuse announced last week that it planned to build a permanent roof on the Carrier Dome as part of a plan to upgrade the school’s West Campus with about $255 million worth of improvements. Pete Sala, SU’s vice president and chief campus facilities officer, also said other renovations are under consideration that will make the Dome “the premier college sports facility in the country.”

The schedules for the construction and the timeframe for its completion have not been determined. However, Sala said SU hopes to avoid moving any football or basketball games while the aging Teflon roof is being replaced.

“This is an exciting moment in the life of Syracuse University and I am incredibly proud to be a part of it,” Sala said in a statement. “The Campus Framework contains bold, innovative ideas that will shape the student experience for generations to come.”

Dan’s the Man. Dan French, who has served as SU’s general counsel since 2014, was named as Syracuse’s interim athletic director and he’ll work closely with Herman Frazier, who was promoted to senior deputy athletic director. They’ll sub for Mark Coyle, who bolted SU for the University of Minnesota after less than one year on the job.

French, a 1995 graduate of SU’s College of Law, previously served as U.S. attorney for the Northern District of New York.

“I look forward to working with Dan French and Herm Frazier in the weeks ahead to continue building a winning athletics program centered around highly accomplished student-athletes,” Chancellor Kent Syverud said in a statement.

Women’s Lax in Final Four. The fourth-seeded Syracuse women’s lacrosse team reached its fifth consecutive Final Four by defeating No. 5 USC 12-11 in overtime on Saturday, May 21, in an NCAA Tournament quarterfinal game at the Carrier Dome. SU’s quest for its first national title continues Friday, May 27, in Philadelphia, where the Orange will face No. 1 seed Maryland.

The SU men’s lacrosse team’s season ended May 21, when the eighth-seeded Orange fell to No. 1 Maryland 13-7 in an NCAA Tournament quarterfinal game in Providence. SU had rallied from a midseason swoon to win the Atlantic Coast League Tournament, but the Orange failed to reach the NCAA Final Four for the sixth time in seven seasons.

SU Lands Leading Scorer. Guard Jasmine Nwajei, the country’s leading scorer at 29.0 points per game last season, is transferring from Wagner to Syracuse. She’ll have to sit out next season but will be eligible just as the Orange is losing guards Alexis Peterson and Brittney Sykes.

Tee It Up. The kickoff times have been set as the SU football team will open the 2016 season with three consecutive home games at the Carrier Dome. First-year coach Dino Babers will make his debut Friday, Sept. 2, 7 p.m., when the Orange faces Colgate in a game that will be televised by ESPN3.

The Orange will play the next Friday, too, as it opens ACC play against Louisville at 8 p.m. Sept. 9 (ESPN2). And the Orange will conclude its September homestand against the University of South Florida on Sept. 17, 3:30 p.m. (ESPN3).

Season tickets are available starting at $99 at Cuse.com, (888) DOMETIX or the Carrier Dome Box Office (Gate B). Single-game tickets for all games except Florida State go on sale June 21; tickets for Florida State are tentatively scheduled to sell starting July 26. 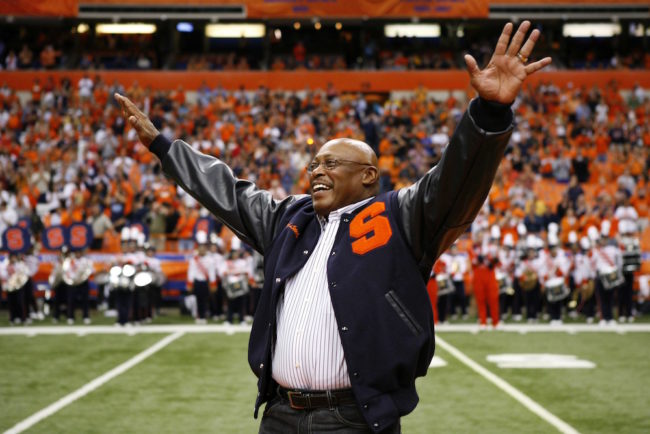 Floyd’s Fond Farewell. Floyd Little, the former Orange All-American who has spent the past five years as a special assistant to the athletic director, revealed during the Mark Coyle departure hubbub a few weeks ago that he was also leaving SU. Little, who turns 74 on July 4, said he wasn’t fired and simply accepted a voluntary separation package because he wanted to spend more time with his wife and family. Little received an honorary doctorate from SU during the recent commencement exercises.