The NBA Summer League is where players hoping to make their way onto an NBA regular season roster are invited to participate to show off their skills on a widely-viewed stage.

This year, there are three venues hosting the Summer League, two of which are already in the books, with the other already underway. The Orlando Magic played host to the first round of action, which began on July 4 with 10 teams and ended on July 10. The Utah Jazz entertained the four teams that partook in the second round, which concluded on July 9 after starting on July 6. Finally, the Las Vegas venue is where 24 teams will go at it for the Summer League Championship started on July 10 and will end on July 20.

The demographic of players who participate can range from rookies who are fresh out of college and have just been drafted; to players who have a year under their belt in the NBA and want a chance to further prove their worth and hone their skills; to veteran athletes who attempt to defy all odds and earn a spot on a team late in their careers. The Syracuse Orange have representatives for all three of these categories in 2015. 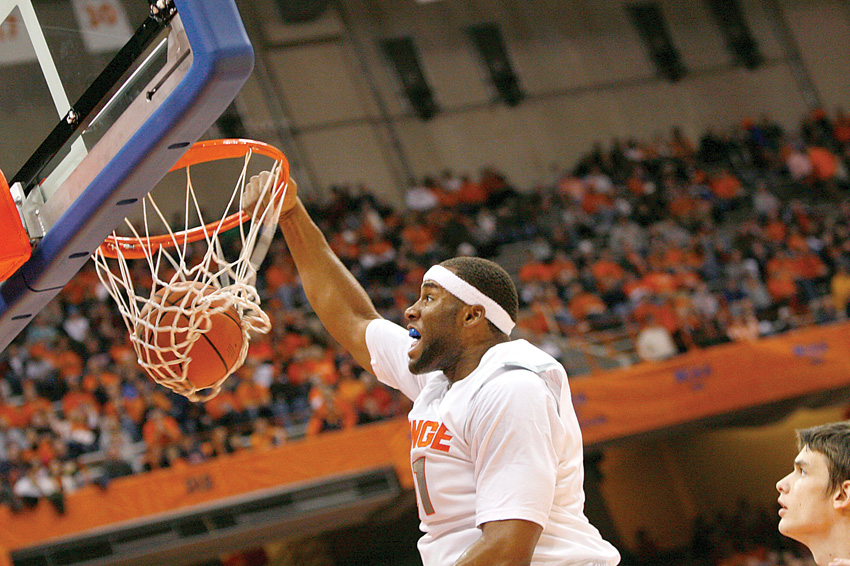 Currently participating in the Orlando location is former Orange player Arinze Onuaku, playing for the Indiana Pacers. Onuaku was a four-year player for head coach Jim Boeheim and had his best year for the Orange as a redshirt sophomore during the 2007-2008 season when he averaged 12.7 points and 8.1 rebounds per game. Since leaving Syracuse, he has struggled to find a consistent landing spot in the NBA, playing for four teams in the past two seasons; most recently being the Minnesota Timberwolves, playing in only six games.

Though Onuaku hasn’t had the most notable NBA career, he has excelled in the NBA Developmental League. When not being a member of an NBA roster, he has spent the last three seasons playing for the Canton Charge, which is owned by the Cleveland Cavaliers. For the Charge, he has averaged a double-double with nearly 15 points and 10 rebounds per contest.

In his final outing for the Pacers, Onuaku performed as well as he had in his first three tries with the Pacers, playing 28 minutes and scoring 11 points with nine rebounds, two assists, two blocks and one steal.

Onuaku was subsequently picked up by the Brooklyn Nets, a team participating in the Las Vegas location. In his first game for the Nets, Onuaku played just five minutes, gathering one rebound in a win against Cleveland. He was left out of the Nets’ second game in Vegas entirely due to a coach’s decision. 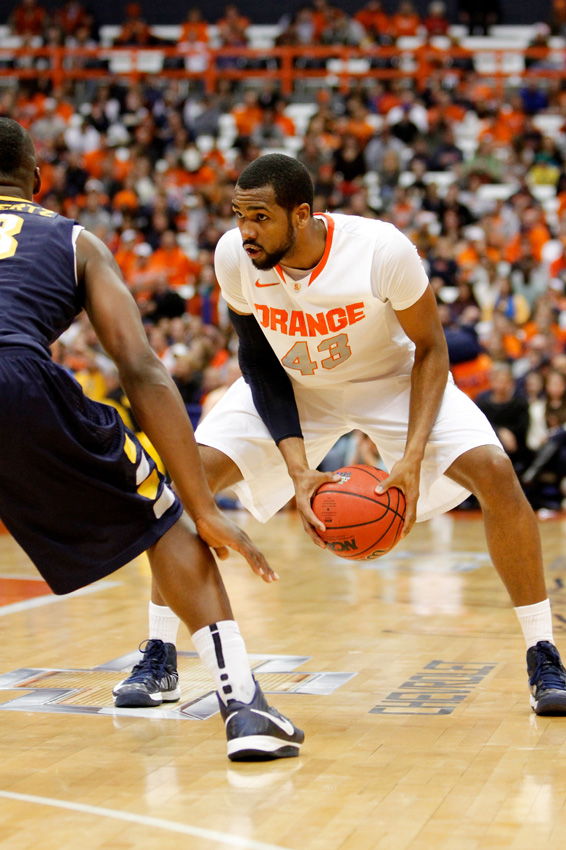 Also playing in the Orlando venue is former Syracuse sharp-shooter James Southerland. Representing the Oklahoma City Thunder this year, Southerland has been an intriguing NBA prospect ever since his breakout senior season for the Orange. With his 6-foot-8 frame, he averaged 13.3 points per game in the 2012-2013 season and was a key contributor for a team that went 30-10 and made it to the Final Four.

Southerland is similar to Onuaku in that he has failed to find a home in the NBA, only playing four games total for two teams over a two-year span. In the 2013-2014 season, however, Southerland found his niche while playing for the Los Angeles D-Fenders in the D-League. He averaged 14.7 points and 6.5 rebounds in 42 games for Los Angeles.

This past season, Southerland elected to play in Europe, where he saw limited playing time in 20 games and averaged just over two points per contest.

During this year’s Summer League, Southerland has experienced more of the same disappointing playing time he dealt with in Europe. He failed to score in the first three games for the Thunder, while averaging just over two minutes per game.

The final game for Southerland, however, was a different story. Southerland played 19 minutes, while knocking down three 3-pointers en route to his 15 points and four rebounds.

Watch James Southerland discuss his time in France and his return to the NBA Summer League: 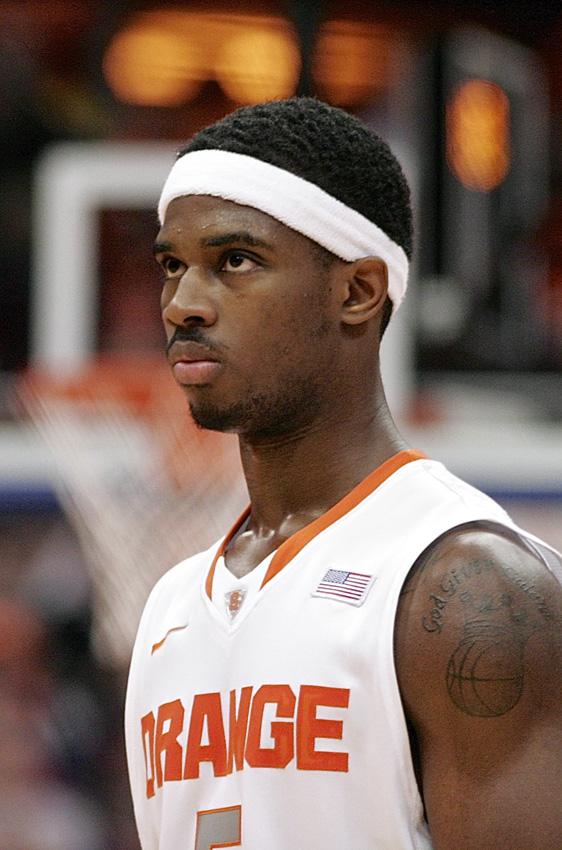 Regarded by many S.U. and college basketball fans alike as being snubbed from the 2014 NBA Draft, C.J. Fair is one former Syracuse athlete out to prove he belongs in the league in 2015.

During his time at Syracuse, Fair improved all areas of his game each year, eventually becoming a deep threat from beyond the arc and the veteran leader of a 2013-2014 Orange team that went 28-6, going 25-0 in their first 25 games; a school record.

After going undrafted last year, Fair joined the Dallas Mavericks Summer League squad and went on to average four points in five games. This led to Fair ultimately joining the Fort Wayne Mad Ants of the D-League, where he, like his Syracuse counterparts, thrived. Fair averaged 13.9 points and 5.7 rebounds in 50 games for the Mad Ants, 20 of which he started.

Playing in the Utah Summer League as a member of the Boston Celtics in 2015, Fair has seen a minutes increase from his last Summer League stint and has been productive with it. In three games, he has averaged nine points, six rebounds and three assists.

In addition to the Utah venue, the Celtics are also currently taking part in the Las Vegas League. In Boston’s first two games in Vegas, Fair scored 14 total points, collected eight rebounds and one steal, while going only 4-for-19 from the field. His shooting woes continued in the Celtics’ third game, going just 1-for-9 with two points and four rebounds.

Watch C.J. Fair’s highlights against the Utah Jazz in the 2015 Summer League: 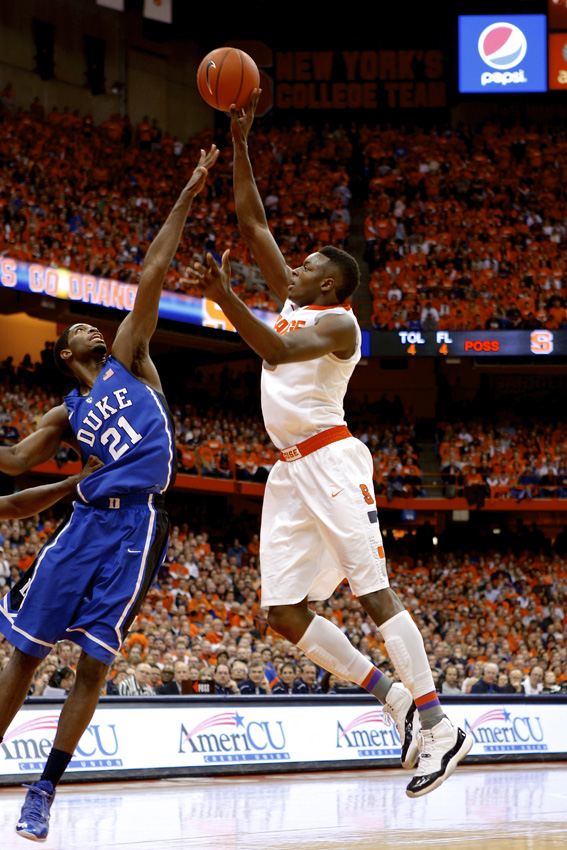 Jerami Grant raised eyebrows in the ‘Cuse when he decided to forgo his last two years as a member of the Orange; however, it has paid off for him.

Grant was selected with the 39th pick in the 2014 NBA Draft by the Philadelphia 76ers, a number which he decided to utilize as his jersey number.

With his 6-foot-8, 210-pound frame, Grant possesses the potential to be an imposing inside threat in the NBA for years to come; something that was apparent in his freshman season at Syracuse. Though he averaged just over three points per game in his first year, his physique was hard to ignore. He would go on to quadruple his points per game output as a sophomore, paving the way for an NBA Draft selection.

In his first season in Philadelphia, Grant played in 65 games, while starting 11, averaging just over six points, two rebounds and one assist per game. Despite the fact that Philadelphia will be without the services of Joel Embiid for a second-straight season, with the addition of the third overall pick from the 2015 Draft, Jahlil Okafor, and former Kentucky big man Nerlens Noel, the 76ers are poised to have young squad for the future, with Grant being a large part.

Like the Celtics, the 76ers are participating in the Las Vegas venue as well. Grant has yet to play in Philadelphia’s first two games in Las Vegas.

Watch Jerami Grant throw down a thunderous slam dunk against the Utah Jazz in the Summer League: 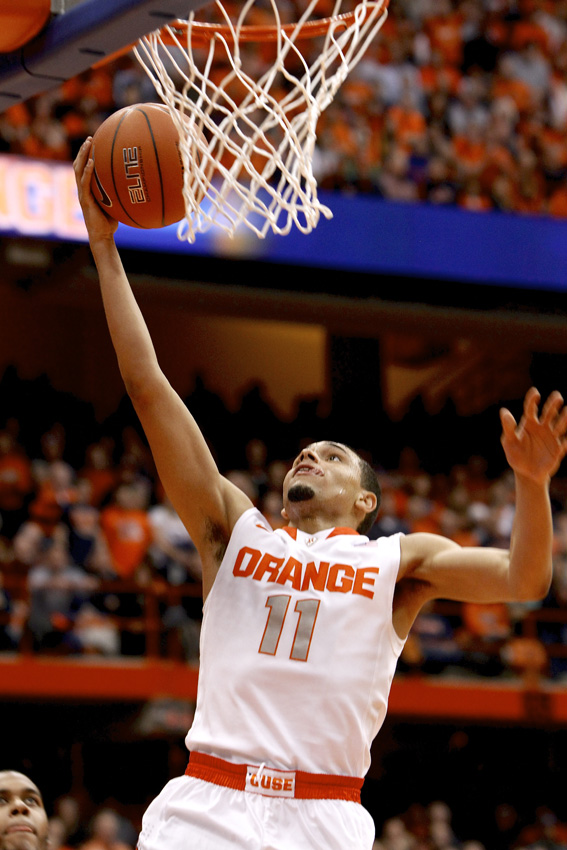 Few saw Tyler Ennis’ stellar freshman year at Syracuse coming during the 2013-2014 season. At the time, he was set to take over for a Michael Carter-Williams-led team fresh off a Final Four berth and was expected to become the point guard of the future for the Orange.

With numbers like 12.9 points, 5.5 assists and 3.4 rebounds per game as a freshman, the NBA looks quite appealing. Even after the season Ennis produced, jumping to the NBA isn’t always the best decision for freshmen. In Ennis’ case, his rookie season indicates that his future would’ve been better suited with “Syracuse” and “Orange” draped across his chest for, at least, another year or two.

After being drafted in 2014 by the Phoenix Suns in the first round, Ennis played only eight games and was back and forth between the NBA and the D-League for much of the season. He did, however, triumph over the competition as a member of the Bakersfield Jam, averaging 18.4 points, 4.3 rebounds and 5.3 assists in nine games.

Toward the end of the season, Ennis, along with Michael Carter-Williams, was traded to the Milwaukee Bucks; a move that would prove to be most beneficial for both former Syracuse point guards. Ennis finally saw significant playing time with the Bucks under head coach Jason Kidd, playing in 25 games and averaging 3.9 points and 2.3 assists per game.

Ennis was surprisingly omitted from Milwaukee’s roster for the 2015 Summer League. With fellow second-year Orange player Jerami Grant participating and blossoming in his Summer League play for the 76ers, it is curious as to why Ennis was left off the roster for the Bucks. 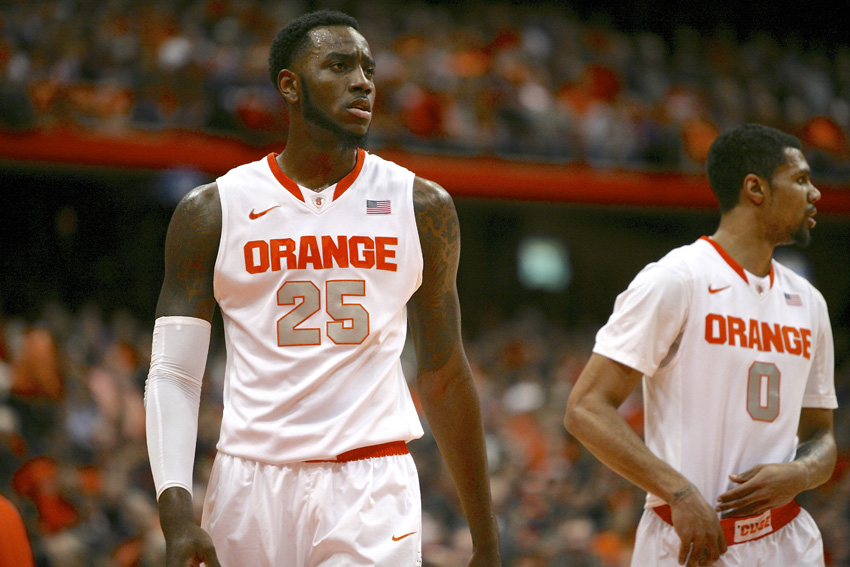 Rakeem Christmas is coming off a career season, which garnered him a series of accolades as well. According to cuse.com, Christmas awards are as follows:

Christmas’ 17.9 points and 9.1 rebounds per game fueled a Syracuse team hindered by bad press because of an ongoing scandal, none of which had anything to do with the current players. Upon losing C.J. Fair to graduation and taking into account the unexpected losses of Jerami Grant and Tyler Ennis to the NBA, Christmas stepped up to the challenge and led the Orange to a hard-fought 18 wins. His crafty post moves and developed outside shot made him a difficult guard for opposing defenses.

In 2015, Christmas will look to help a Cavaliers team which lost in the NBA Finals this past season. Should he make the team, Christmas will have the opportunity to learn from four-time MVP LeBron James, which will put him in the best position to win of any former Orange player in the NBA currently.

Christmas’ first game with the Cavs saw him struggle to score, going 1-for-9 with six points in a loss to Golden State. His second game was more productive, going 2-for-4 with eight points, four rebounds and four blocks in a losing effort to Brooklyn. In his third appearance for the Cavs, Christmas scored all eight of his points from the line, while grabbing 11 rebounds in a win against Milwaukee.