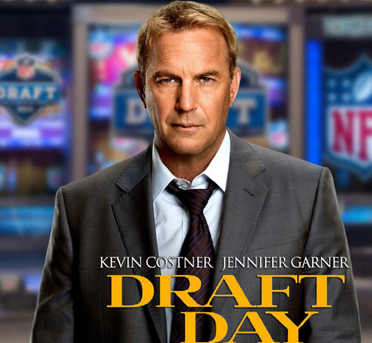 ‘Draft Day’ focuses on GM rebuilding Cleveland Browns. Also up is he scary ‘Oculus’ and two 2’s, sequels to ‘Rio’ and ‘The Raid.’

Add football to the list of sports that Kevin Costner has tackled on the big screen.

You remember him hitting golf ball after golf ball into the water to lose the U.S. Open in “Tin Cup,” right? You realize he played baseball on the diamond he cut out of cornfields in “Field of Dreams,” correct?

The veteran actor can hope that his role as National Football League general manager Sonny Weaver Jr. can be so everlasting in sports movies lore.

Written by Scott Rothman and Rajiv Joseph and directed by Ivan Reitman, “Draft Day” is a part-drama, part-comedy that totally feeds into America’s never-ending fascination for all things NFL.

The trailer shows the somewhat addled GM of the Cleveland Browns busy preparing for a draft that his owner-boss, played with some pomposity by Syracuse University graduate Frank Langella, and countless members of the obsessed-fan Dog Pound are counting on to put a shine on the franchise’s fortunes.

GM Weaver appears to allow his salary cap specialist Ali, played by Jennifer Garner, to give more sage advice that the owner or Coach Penn, played by Dennis Leary. His mom, played by Ellen Burstyn, meanwhile harps on him via Twitter.

Plenty of NFL types play themselves, including Deion Sanders and Jon Gruden.

Also opening this week is the supernatural horror flick “Oculus.”

Written by Mike Flanagan and Jeff Howard and directed by Flanagan, this is a scary tale of a woman who tries to prove that her brother did not kill their mother when they were teens to free him of that stigma as he’s released from prison.

The big catch is that she wants to prove that it was an otherworldly, supernatural phenomena that lives in a mirror at the root of that evil and much more.

The trailer shows terror beyond belief.

“Oculus” stars Karen Gillan and Brenton Thwaites as the adult siblings, Katee Sackhoff as their mother, and Rory Cochrane as their father.

This one follows the antics of former Minnesota macaw Blu, his wife Jewel and their three kids. This adventure takes them from Rio de Janero to the mighty Amazon, where they must battle the wild.

The latter is an action crime thriller that follows the path set in 2011 by “The Raid: Redemption.”

Originally titled “The Raid 2: Berendal,” was written and directed by Gareth Evans. It follows Rama as he goes undercover in Jakarta to take on a mighty big underworld.

The trailer shows English subtitles amid much tension, martial arts and swordplay.

Marvel Comics’ trip to the big screen had a really grand opening weekend.

“Captain America: The Winter Soldier” ran through or jumped over everything in its path on the way to a list-topping first-weekend box office gross of $92.02 million.

Released to 37 museum IMAX screens only, including the Bristol IMAX Omnitheater in the downtown Syracuse Museum of Science and Technology, “Island of Lemurs: Madagascar” opened at No. 25 with a first-weekend gross of $188,307.

The adventure of lemurs, way bigger than life
Kevin Costner’s conviction as NFL GM adds ‘Draft Day’ to his list of sports gems
To Top