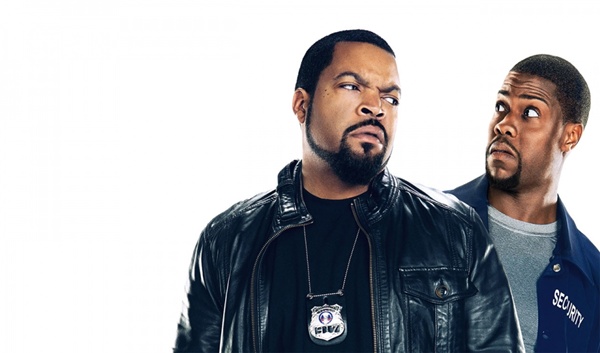 Comic Kevin Hart stars with Ice Cube in ‘Ride Along’

Kevin Hart cracks wise in another opening film this week. It seems like he’s everywhere.

This time, instead of trading quips with Sly Stallone in an over-the-hill “Grudge Match,” the guy who started in stand-up is paired with Ice Cube in “Ride Along.” (And the trailer for his work in the upcoming “About Last Night” is in theaters nowadays, too.)

Yes, they will make fun of Hart’s height in “Ride Along,” too.

The trailer for this comedy, written by Greg Coolidge and Jason Mantzoukas and directed by Tim Story, shows Hart arguing with a child over his stature; in “Grudge Match” it was with fellow promoter Alan Arkin.

The plot in this one has Hart’s security guard character Ben Barber attempting to prove that he’s worthy of marrying the sister of Ice Cube’s policeman character James Payton by riding along with Payton — who’s also his brother-in-law to complicate matters — around Atlanta.

Tika Sumpter, most recently of “Tyler Perry’s A Madea Christmas,” stars as the lucky (?) woman.

The latest installment of this franchise action thriller features Chris Pine in the star role of CIA guy Jack Ryan, whose shoes have previously been warn by Alec Baldwin, Harrison Ford and Ben Affleck.

In the latest, written by David Koepp, Ryan — taken from the pages of late novelist Tom Clancy for “The Hunt for Red October,” “Patriot Games,” “Clear and Present Danger” and “The Sum of All Fears” — is displayed as a young CIA guy who’s working to thwart financial terrorism.

Horror fans can bow to the opening of “Devil’s Due.”

Written by Lindsay Devlin and directed by Matt Bettinelli-Olpin and Tyler Gillett, this thriller follows the honeymoon and further tribulatons of a young couple played by Zach Gilford and Allison Miller.

Husband Zach McCall decides to shoot video for posterity after new wife Samantha McCall becomes pregnant. That only helps him chronicle the creepy changes that are far more than the usual signs of a baby on the way.

For animation buffs, there’s the opening of “The Nut Job.”

The latest to receive the spotlight is Surly, a squirrel. Surly is sent from the park to the city.

The trailer shows that Surly may or may not save the urban day by discovering Maury’s Nut Store.

The film’s slogan is “No Nuts. No Glory.”

Written by Lorne Cameron and Peter Lepeniotis and directed by Lepeniotis , the furry characters are voiced by Will Arnet, Brendan Fraser, Liam Neeson and Katherine Heigl.

The big winner last week was the war drama “Lone Survivor.” The Taliban-fighting opened as the No. 1 grossing film, according to boxofficemojo.com, grossing $37.84 million for the weekend and totaling $38.23 million (thanks to early previews).

That finally overtook the animation of “Frozen.” The Ice Age family fun finished at No. 2 with a take of $14.72 million. After eight weeks, “Frozen” has grossed $317.32 million.

“August: Osage County” took seventh with a weekend gross of $7.15 million, goosing its overall (with several preview cities) to $7.8 million.

“Her” checked in at No. 11. The weekend it at last opened in Syracuse totaled $5.53 million, raising its overall take to $8.74 million (with two weeks of limited city screenings).