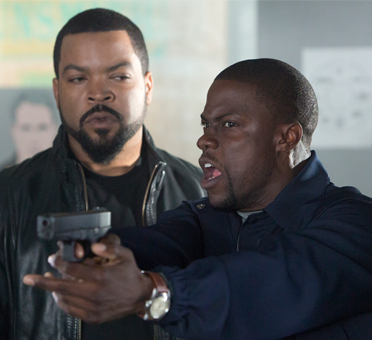 ‘Ride Along’ goes from pedestrian to powerful in mid-shift

As Ben Barber, Hart is a tiresome dude.

Ice Cube spends the first half of “Ride Along” glowering, choosing his words carefully, glowering some more and menacing Hart the best he knows how.

As James Payton, Cube is a scary dude.

And so this comedy, written by Greg Coolidge and Jason Mantzoukas and directed by Tim Story, limps along. How much juice can be squeezed out of this obvious sight that Hart is short, anyway?

Security guard and just-accepted police cadet Barber tries too hard to impress Atlanta cop policeman Payton on a one-day ride along because he wants to earn acceptance — and Barber’s blessing to marry his very tolerant sister (played with grace by Tika Sumpter). Barber, meanwhile, plays mean jokes on Barber, bad-mouths him to other cops, and plays the bad-ass guy to the max.

But then comes a plot twist, which I will not reveal here.

Two other cops, played by John Leguizamo and Bryan Callen, become more important to the plot. A bad guy portrayed with a great, big sinister streak by Laurence Fishburne, walks into the evening. The police lieutenant (Bruce McGill) tries to sort out the heroes from the zeroes.

And when Barber and Payton need each other, Hart and Cube suddenly become more likeable, the plot become less boilerplate, and “Ride Along” is a whole lot more fun.