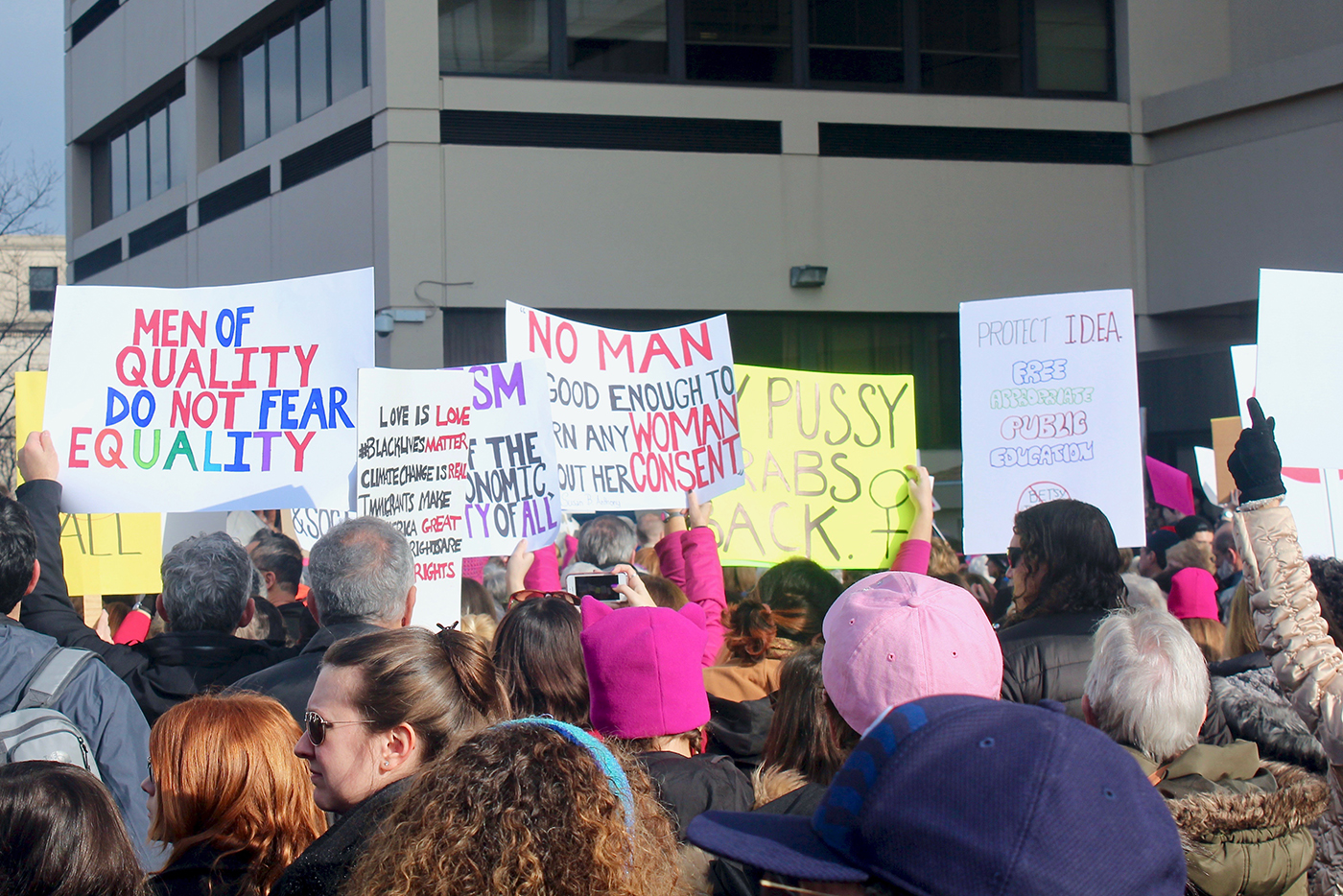 The well-attended Syracuse in Solidarity sister event had its own unique touches.

The Syracuse in Solidarity rally sprouted roots and blossomed into a two-hour peaceful protest at the James F. Hanley Federal Building on Jan. 21. More than 2,000 people attended the event, which was a local complement to the Women’s March on Washington, D.C., and followed suit with more than 700 gatherings throughout the country.

The Saturday morning felt like a warm spring day in downtown Syracuse, with comfortable temperatures and a brilliant sun. Signs bearing phrases “Trump is a Dumb Creep,” “Practice Kindness,” “Narwhals Not More Walls” and “Trump Likes Nickleback” were held skyward. Many women wore pink knit hats, their tops tapered at opposite ends, as “pussy hats” to signify unity and counterattack the misogynist comments made by President Donald J. Trump. Interestingly, Trump’s name was mentioned only a few times during the hour of speeches. 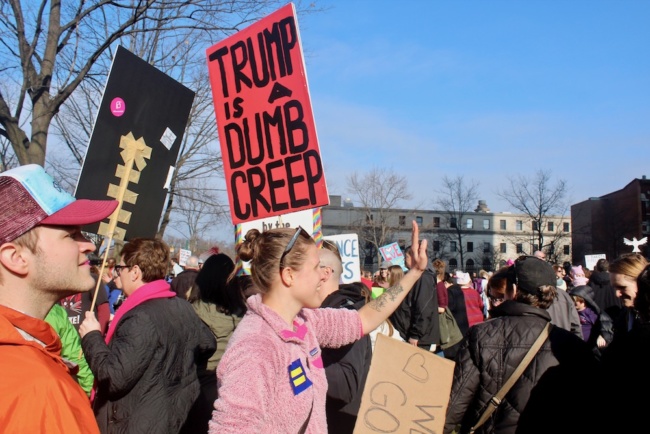 People began to gather minutes before the 9 a.m. kickoff, which was highlighted by musician Joe Driscoll accompanying drummers and a saxophone player. Sporting a red sleeveless T-shirt with the phrase “Racism sucks” in all capital letters, Driscoll told the crowd, “We’re sisters! We’re brothers! We’re here for each other!” After further mentions of women’s rights, gay rights, civil rights, health care and other topics, the audience shouted “Fight back!” in response. Songwriter-activist Driscoll is currently entertaining the notion of running for a seat on the Common Council.

Pastor Decarto Draper of Tucker Missionary Baptist Church presented a nondenominational opening prayer prior to the speeches. The featured speakers formed a mix of state representatives and local government officials, representatives from local chapters of national organizations and a former Kenyan refugee, as they all shared their feelings.

Councilor Helen Hudson confidently stated, “I’m black, I’m female, I’m a unionist and I have a vagina. I think I cover all bases.” Hudson finished her speech with a determined statement that she’ll hold all levels of her government accountable for their actions. 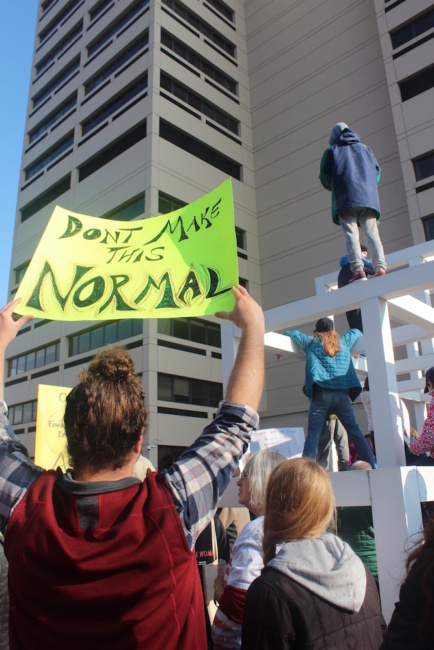 Khadijo Abdul Kadir, a Kenya-born refugee, expressed her gratitude to be in this country. She mentioned the isolation of being in the Kenyan camp. “Illegal immigrant is not a term anyone wants to hear. We are all human,” she said before paraphrasing an African proverb: “If you educate one woman, you will educate the whole universe.”

Betty Lyons, from the Snipe Tribe of the Onondaga Nation, focused more on family. Central New York is Haudenosaunee territory, and they were at the mercy of the settlers, who took from their people. However, she reiterated their confederacy’s strength, persevering through these years. “Women ran the households,” she said. “It’s important for men to admire and respect women.”

Lyons also emphasized teaching children, bringing them up to accept themselves and the differences of others, as murmurs of agreement spread through the crowd. A woman standing a few feet away said to her friend she was proud to see many children participating at the rally. As the adage goes, children are, and will determine, the future.

Some may have believed that the Syracuse in Solidarity event was solely a celebration of women’s rights. Yet the effort also incorporated LGBTQIA rights, immigration reform, racial injustice, worker and healthcare issues and environmental concerns.

As part of the nationwide grassroots efforts, the local New Feminists for Justice movement — spearheaded by Roseanne Olszewski, Donna Moore and Wendy Knafel Schmidt — helped produce the Syracuse in Solidarity event. Joining the party in spirit, the nearby National Grid building pinked-out its lights the night before the event.

Olszewski said pink is a familiar color most fitting for femininity. It’s not to be misconstrued as promoting the age-old association that boys will wear blue and girls will wear pink. Although the cause is different from the suffrage movement of the mid-1800s, women bore purple, white and gold throughout the crowd, especially as white arm bands with pinned purple ribbons. 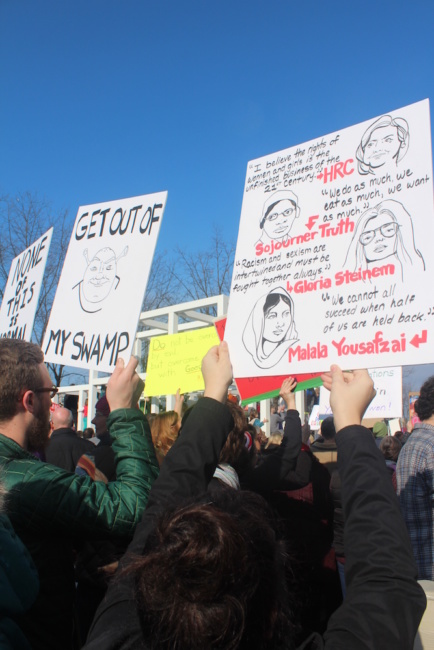 “As a woman, I felt many fears pulsing through me. A flicker turned into a flame,” Olszewski said about the beginnings of the New Feminist movement.

Schmidt also took to the microphone to address how oppression can be experienced online. “Someone on social media called me a snowflake,” she said, but then she made reference to them forgetting that Schmidt is from Central New York. “When a bunch of snowflakes get together, they storm like none other!”

The Syracuse in Solidarity event far exceeded the organizers’ expectations. When Olszewski was filling out the required permit paperwork with the city of Syracuse, she expected a 50- to 100-person attendance. Instead, the rally climaxed with its 2,000-plus attendees forming a hand-in-hand line on the sidewalks that circled around the Federal Building’s perimeter.

Windows of Downtown Opportunity
The Rights Stuff
To Top