Lewd Londoners can’t get lucky in this fizzy farce.

At the center of the crazy-quilt plot of Ray Cooney and John Chapman’s farce Not Now, Darling lies a sturdy comic device featuring two guys: a loud-mouthed schemer and a schnook who keeps catching all the crap those schemes engender. For all his anguish, London furrier Arnold Crouch (Alan Stillman) has some of the comic resonance of a Lou Costello, but his overbearing boss Gilbert Bodley (David J. Minikhiem) is never a just a straight man like Bud Abbott. His cockamamie efforts to have carnal knowledge with a woman not his wife come off like a box full of exploding cigars. He just can’t get no satisfaction. His loss means our laughter.

According to the program for this Central New York Playhouse show, running through Jan. 25, the scene is set in London “about 40 years ago,” which means no one has a cell phone. When anyone wants to find another person he or she has to use one of the four doors on Sara Barden’s set. We should be in a retail shore, but the dark blue walls and tasteful original paintings suggest an Anglican parlor rather than an emporium where money changes hands.

That’s just where things start, however. Gilbert, who speaks in an abrasive bark, is cajoling Arnold, a shy fur tailor from the backroom, who usually does not venture into the showroom. Gilbert wants Arnold to sell a black mink worth 5,000 pounds to Jane McMichael, his sweetie pie, for only 500 pounds. Gilbert will make up the 4,500 pound difference with an envelope of cash. For this venture Gilbert expects a big sexual payoff with Jane.

We don’t expect realism from farces, but this production enjoys two assets. One is that all the furs look terrific. No credit is given in the program, so we have to assume that the troupe has some generous friends. Secondly, director Dustin Czarny has ensured that players stick to British accents all the way through, but not everybody comes from the same neighborhood. Spunky, no-nonsense administrative assistant Miss Tippdale (Binaifer Dabu), for example, sounds as though she might have gone to school with the Geico gecko. In the Upstairs,Downstairs milieu of British drama, Miss Tippdale’s accent means she’s faster on the pickup than the two male dunces she works for. 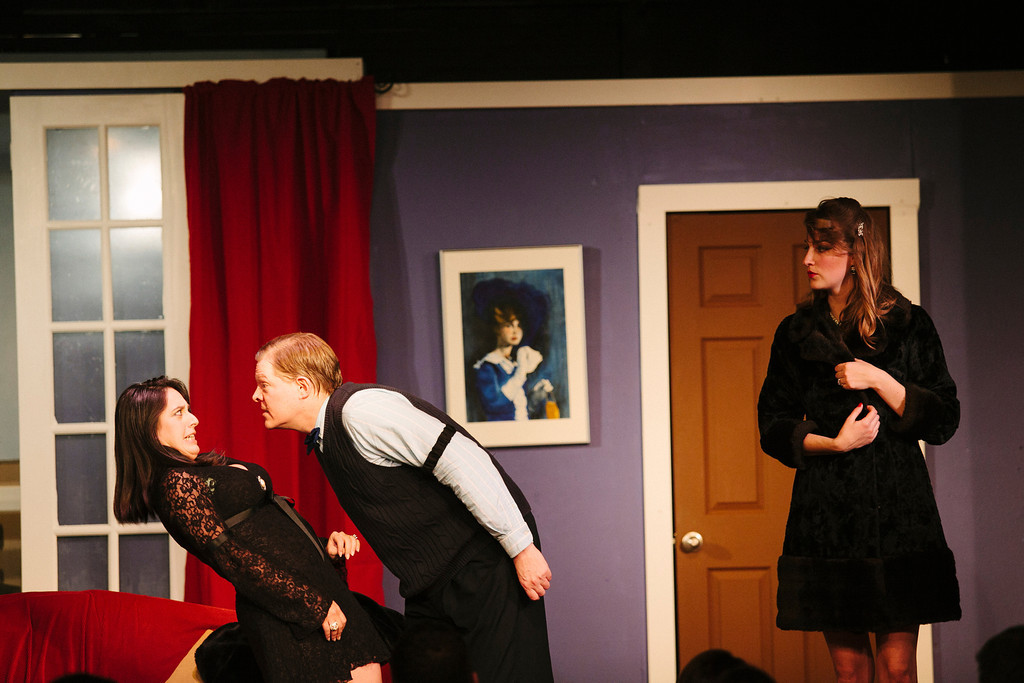 When Jane appears, she turns out to be a tall, willowy blonde. Although Gilbert has told us that this character had been a stripper a short time ago, actress Meghan Jo Clary’s Jane seems well-spoken and polite, even demure. Program notes inform us that Clary has degrees in Latin and Greek from Hamilton College. Who would have thought that translating Catullus could have been preparation for this role?

Anyway, when Gilbert tells Jane she can’t have the black mink (let’s skip over the reason), her pique is reminiscent of the devices of her previous profession. She pulls off her dress, wraps herself in the mink and flees to an offstage closet, from which she extends her black, lacey undergarments. They are placed in a small shopping bag, and when the wrong people show up, as they are wont to do, the bag is thrown out the window.

Longtime students of Ray Cooney may find the flung panties and bra a break from his usual G-rated glee. In France they call Cooney le Feydeau anglais: the English Feydeau. That’s because his fast-paced clockwork plots usually guarantee humiliation for the upper bourgeoisie. Run for Your Wife, his best-known work, has been produced three times locally and was Czarny’s kickoff production for his company four years ago.

Not Now, Darling, making an area premiere, is a collaboration with John Chapman, whose taste is naughtier and spicier. Significantly, in this show only one door is slammed regularly, and others are used to stash people hoping not to be seen, such as women lacking clothing.

Harry also has some action on the side in the person of bosomy brunette Sue Lawson (Sharon Sorkin), who also loses some clothes and finds herself stashed in a closet. Sorkin, who has been establishing a reputation with upmarket playwrights like Pinter, Williams and Shakespeare, looks to be enjoying herself as a broad in a broad comedy.

In case the show might be able to catch a breath, Cooney and Chapman send in another couple: the dithering Commander (Navroz N. Dabu) and his fur-clad wife Mrs. Frencham (Kate Huddleston). They can never find one another and always arrive at the wrong time.

Under Czarny’s disciplined direction, everyone in the cast is guaranteed a laugh, including Gina Fortino as the walking mannequin Miss Whittington. But much of the show belongs to Minikhiem and Stillman, as well as Binaifer Dabu’s Miss Tippdale, who is not the frump she’s introduced as. When the heat is on, Minikhiem can glisten his neck and brow on command. And despite some snappy lines, Stillman delivers more physical comedy, like a silent comedy film player in a ballet of grief and humiliation.

Making the Scenes
On the Double
To Top