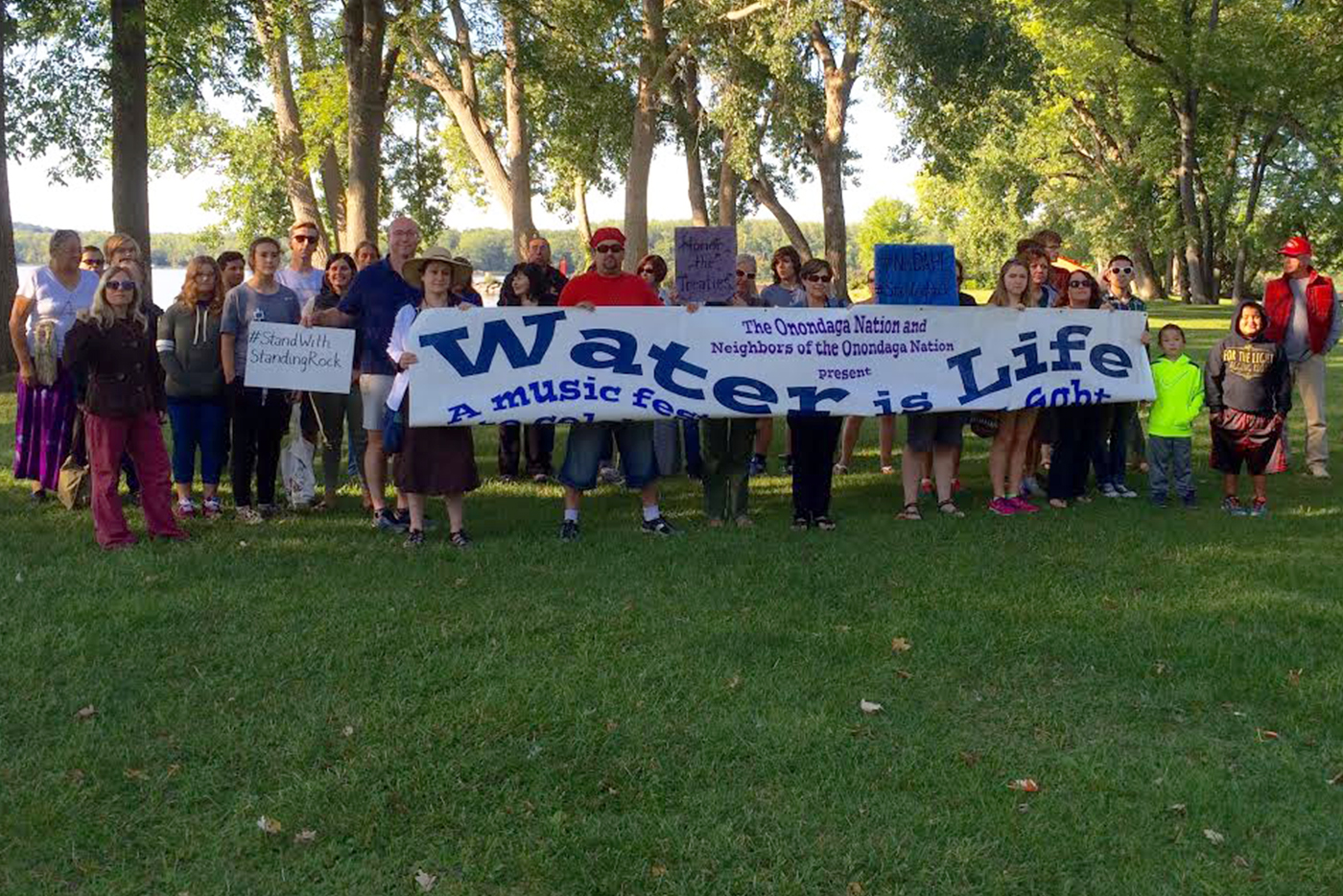 Tadodaho Sid Hill opened a Sept. 5 prayer service with the Haudenosaunee Thanksgiving Address. He praised the trees, the birds, the land and especially the water, as members of the Iroquois Confederacy and friends stood near Onondaga Lake.

“This lake looks beautiful but we can’t use it,” said Hill, spiritual leader of the Onondaga Nation. “We can’t eat the fish. We can’t drink the water. We can’t use the medicine it provides.”

About 60 people were at Willow Bay Park to support members of the Standing Rock Sioux Nation protesting to protect their water supply in North Dakota. For months, demonstrators representing more than 100 Native American communities have opposed the 1,170-mile, $3.8 billion oil pipeline from western North Dakota to Illinois.

Onondaga Lake, which is sacred to the Haudenosaunee, remains polluted by decades of industrial waste, and is still unusable despite mandated cleanups. The Onondaga Nation issued a statement supporting the Sioux protest Aug. 24, the same day a busload of Onondagas joined protests in Washington, D.C.

“We have to pray for peace to protect us from the big, nasty oil snake who is trying to eat them. Look what happened here,” said Onondaga Nation member Jeanne Shenandoah, referring to the polluted Onondaga Lake. “If they (the oil company) put this pipe in, there will be destruction and we can’t go back.”

In recent weeks, hundreds of people have created prayer and protest camps near the North Dakota construction site to oppose the pipeline, which the Standing Rock Sioux tribe describes as a threat to their cultural history and way of life.

The tribe filed court papers Sept. 2 trying to stop construction, saying it found several sites of “significant cultural and historic value” along the pipeline’s path, according to The New York Times. A federal judge is expected to rule by Friday, Sept. 9, on whether construction can continue.

“That company is using hired thugs to bulldoze through sacred sites,” she added. “This is not right. This should be illegal.”

On Sept. 3, a day after tribal leaders say construction destroyed burial and cultural sites, a Sioux spokesman told the Times that security dogs bit six people, including a 2-year-old. At least 30 people were pepper-sprayed, the paper reported.

Police officials told the Times four private security guards and two guard dogs were injured in a confrontation between construction crews and demonstrators, who call themselves water protectors.

“They’re shaking up the very foundations of Mother Earth,” said Renée Roman Nose, a Cheyenne who was at Red Warrior Camp for two days with her husband, Brian Patterson, who is Haudenosaunee.

“They’re plowing over our ancestors,” Roman Nose told about 60 people, who formed a circle at Willow Bay Park. “They’re crushing the bones of our ancestors.”

“Everything was provided to us by the creator for us to walk peacefully on Earth,” he said. “We’re thankful for the birds. We’re thankful we can see the trees. How long will it be like this?”