(News and Blues) Your weekly re-cap of weird and funny news from around the nation.

Curses, Foiled Again
Before three men who broke into a lingerie store in Houston, Texas, could steal anything, one with a revolver backed into another holding a rifle. Surveillance video showed the jolt caused the rifle to fire, “which then spooked the suspects,” police Officer Jeff Brieden said. Believing they were being fired upon, both armed men opened fire, discharging nearly a dozen rounds, one of which went through a mannequin, before all three fled. (Houston’s KHOU-TV)

Spicy Lit
The Chipotle restaurant chain began featuring original stories by Toni Morrison, Michael Lewis, Malcolm Gladwell and Jonathan Safran Foer on its bags and drink cups. Foer, the vegetarian author of “Eating Animals,” proposed the idea to Chipotle’s CEO, Steve Ellis, who put him in charge of the project. “What interested me is 800,000 Americans of extremely diverse backgrounds having access to good writing,” Foer said, pointing out, “I wouldn’t have done it if it was for another company, like a McDonald’s.” (Vanity Fair)

Sounds of Silence
A new anti-noise law aimed at late-night revelers in Arlington County, Va., bans “wailing” after 2 a.m., also yelling, shouting and screaming. The County Board pointed out it’s the first in metro Washington, D.C., to target “over-conversation,” or the human voice. “We’re not Mayberry RFD,” board member John Vihstadt said, “but we’re not Manhattan on the Potomac either.” (The Washington Post)

Furniture in the News
French lawmakers on the National Assembly legal committee voted to alter the country’s 210-year-old civil code to upgrade the status of pets, which currently is “no different to a chair or a table,” according to Reha Hutin, president of the animal-rights group Fondation 30 Millions d’Amis (30 Millions Friends Foundation). If the full assembly approves the measure, cats and dogs will go from “personal property” to “sentient living being.” (France’s The Local)

Slightest Provocation
Three parents beat up a school bus driver in West Palm Beach, Fla., because he didn’t let children off fast enough to suit them. Driver Joseph Beauzile, 40, kept the door closed while he made the elementary school students form a line. Police said Shacaurra Burns, 25, forced her way onto the bus, and Ryan Beckford, 33, ripped the door open and began punching Beauzile while Jean Bertrand, 33, held him down. (South Florida Sun Sentinel)

On Second Thought
When Christopher Lewis refilled his 89-cent drink without paying at a Veterans Affairs hospital in Charleston, S.C., a federal police office issued him a ticket and banned him from the hospital. Facing a $525 fine, Lewis explained that he told the officer he hadn’t seen the sign saying no free refills and was willing to pay the 89 cents. Hospital officials who reviewed the incident decided a warning was sufficient. (Associated Press)

Up in the Air
At least 150 commercial flights have landed at the wrong airport or started to land and realized their mistake in time, according to government safety data and news reports since the early 1990s. The biggest trouble spot is Moffett Field, a joint civilian-military airport in San Jose, Calif., where six flights heading for Mineta San Jose International Airport 10 miles to the southeast have tried to land. Most incidents occur at night, when pilots have disregarded their navigation equipment because the information didn’t match what they were seeing out their windows. “You’ve got these runway lights, and you are looking at them, and they’re saying, ‘Come to me, come to me. I will let you land.’ They’re like the sirens of the ocean,” said former Air Force pilot Michael Barr, who teaches aviation safety at the University of California. (Associated Press)

Second Amendment Meets the 21st
Wilshire Gun, a new state-of-the-art indoor firing range in Oklahoma City, has applied for a liquor license. “We wanted to build a place, the first one in Oklahoma, where you could go in, shoot, enjoy the retail area and then go to the café,” owner Jeff Swanson said, insisting that shooting complexes which offer customers more than just a place for target practice “is where the shooting sport is headed.” Swanson explained that Wilshire Gun’s staff intends to scan the driver’s license of customers who order drinks to assure that none would be allowed to enter any of the shooting facilities as a spectator or shooter for the remainder of the day. (Oklahoma City’s KOKH-TV) 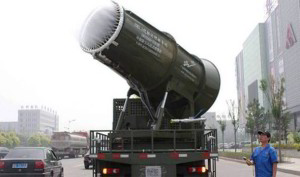 Chinese authorities set up two giant water cannons to fight air pollution in Lanzhou, the capital of Gansu province. The long-range sprayers shoot a fine mist of tap water 2,000 feet into the air, where, it will “stick to the dust and form larger particles and fall back down to the surface under gravity,” according to Martyn Chipperfield, professor of atmospheric chemistry at the University of Leeds. He explained that although the falling mixture would reduce pollution, it could also cover people with mud. (Britain’s Daily Mail)

First Things First
Yale University basketball player Brandon Sherrod left the team to join Yale’s a cappella glee club, the Whiffenpoofs. The group, formed in 1909, comprises 14 rising seniors who take a year off school to travel the world and perform. The 6-foot-6 Sherrod averaged 6.8 points and 4.3 rebounds with the Bulldogs, who finished this past season 19-14 and are expected to challenge Harvard for the Ivy League title next season. “This is supposed to be the year, and you want to play with your guys,” Sherrod said, “but the Whiffenpoofs is a once-in-a-lifetime opportunity.” (Associated Press)

New Times is Online Too
Interview: Tom Buckel and Deborah O’Shea
To Top