For the past few months, I’ve been actively working on a UFO statistics book. Needless to say there has been some number crunching going on in my household.

Recently, several friends asked about what time of year is best for UFO spotting. Off the top of my head, I told them the only high sighting months are July and August, but this was based on my weekly research writing this column. To date, I really hadn’t actually compiled a chart based on real statistics, it had always been a gut sense of the numbers.

As it turns out, this is one of those times that my gut had it wrong. Both summer and fall are the peak time to see UFOs!

The chart below is a 15-year compilation of National UFO Reporting Center data of over 4,000 New York State UFO sighting reports. This data was scrubbed for reporting errors and database errors. 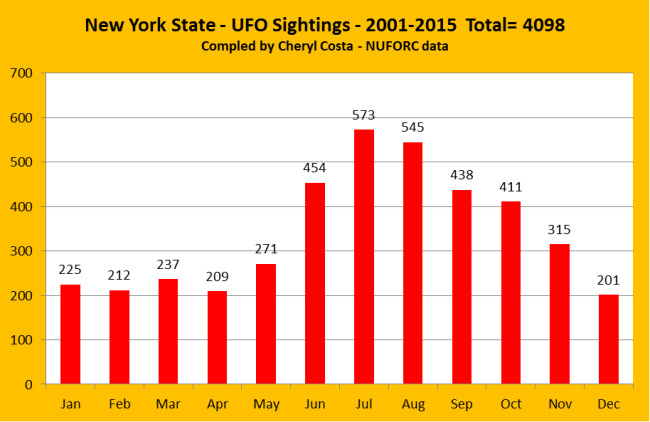 I always knew that January, February and March were somewhat slow months for UFO reporting. I always figured that it was the cold weather here in New York. What I didn’t realize was the almost flat sighting season from December through May. I really expected April and May to be good sightings months, given the temperate spring time weather.

To be honest with you, I never expected 15 years of actual UFO Sighting report numbers to shape up the way they did. A high school math teacher once told me, “Numbers don’t lie!” I guess he was right.

Feb. 26, 2016: At 7 p.m., a resident of Melville reported seeing three bright flying objects over the city.

Feb. 27, 2016: At 6:20 p.m., a resident of Cazenovia reported a linear flying object with white light at either end, flying slow and silently.