Neil Simon’s Laughter on the 23rd Floor, at the Central New York Playhouse

Neil Simon’s Laughter on the 23rd Floor, at the Central New York Playhouse through May 3, is the playwright’s second essay on comedy. In The Sunshine Boys (1972), he shows us how the wells of humor are found in bitterness and disappointment. In the autobiographical Laughter (1993), Simon lets us know how a joke factory works. He was once the junior-most (25 years old) member of a team producing 90 minutes of material for a volatile neurotic on live television. The action begins in March 1953, but there is nothing nostalgic about Laughter. In an uncanny anticipation of AMC’s Mad Men, Laughter presents a world that, for all its explosive hilarity amid tension, we have no wish to return to.

Given that NBC’s Your Show of Shows with Sid Caesar (who died in February at age 92) was indeed 61 years ago, director Dustin M. Czarny is prudent not to waste time and energy trying to mimic the models for the main characters. They have pretty much faded from popular memory. “Footnotes are not funny,” could well be a line in the play. The name of the character the writers are struggling to support is Max Prince, close enough to clarify the link to Caesar.

In creating the role Edward Mastin brings a mustache and a boozy, drug-ridden blank stare, making him look like a zonked William Powell, with just a touch of Jackie Gleason’s bravado. Such a character might entrance millions, but in the office he has to be restrained from putting his fist through the wall. Never warm and fuzzy, in his sole dialogue with the Simon character, Lucas Brickman (Dan Rowlands), Max gives no indication he knows who he’s talking to.

In an absence of vanity, Simon does not give his alter-ego Brickman many gags but instead has him earnestly introduce the other characters and explain transitions. Each comes with a distinct personality and agenda, but only Milt Fields (Lanny Freshman, Syracuse’s most reliable vaudevillian) is full of tricks and talks like a nightclub comic. The senior writer, Val Slotsky (Jim Magnarelli), sees the roots of his comedy in Gogol and Chekhov but can find no humor in the death of Josef Stalin, a news item of the day. Despite the Russian accent, Magnarelli plays Val with a touch of MGM’s golden-age comic actor S.Z. (“Cuddles”) Sakall, including the malapropisms: “You call him Marlon Brando? I call him Marlo Brandon: It’s funnier.”

Other writers deal with implications of the job instead of just trying to knock the others dead in writing sessions. Kenny Franks (David Vickers) wonders how much of humor relies on aggression. Carol Wyman (Gina Lynne Fortino), the only woman in the crew, suffers casual gender aggression, but really worries that any jokes about witch-hunting Sen. Joseph McCarthy could bring down vengeance and make them all unemployable. Milt still says McCarthy giggles like Porky Pig. Chain-smoking Brian Doyle (Dustin Czarny), the only Irishman in the pack, thinks television is too transitory and small-time and has set his sights on breaking into the big money in Hollywood.

By arriving last, the loudmouthed hypochondriac Ira Stone (Jim Uva) makes the biggest entrance and, as a performer upstages the other voices at the writing table. Rumor has it that Ira was meant to evoke Mel Brooks, actually a year older than Simon, who was indeed already on the team. Brooks’ take on working in the joke factory is found in the 1982 movie he produced, My Favorite Year, and subsequent stage musical. Director Czarny and actor Uva jettison the Brooks link but still give Ira some of the best gags. When Max does not appreciate a line Ira has written for him, he tears it out of the script and eats it. 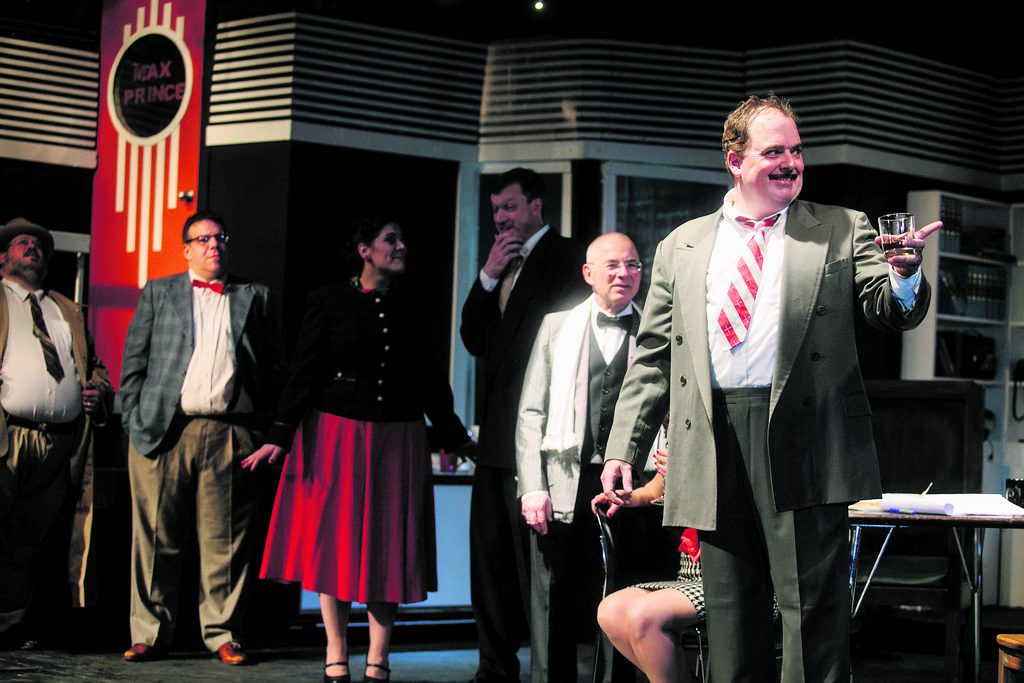 Edward Mastin (right) in Laughter on the 23rd Floor.
Photo by Amelia Beamish.

That script is for a spoof of Marlon Brando’s Julius Caesar, a comic genre pioneered on Your Show of Shows and later taken to town by Brooks in movies like Blazing Saddles and Young Frankenstein. Crisis comes when network execs argue such humor goes over the head of the great unwashed and takes too much time, thus the show should be reduced by a half-hour.

Director-actor Czarny maintains a mood of fine frenzy throughout, although the crispness of gag lines is uneven, with Mastin, Rowlands, Uva, Freshman and Magnarelli at the top of the game. Navroz Dabu’s excellent late-art deco set and Capri Merrifield’s period costumes really take us back to the Eisenhower age, even more than the (cough! cough!) smoking.

The Hangar Theatre celebrated its accomplishments of 2013 at its annual meeting Monday, April 7, where one business organization and three community members were recognized as substantially impacting the continual success of the Hangar.

The Philanthropic Angel Award is to a person or organization for contributions that set a pace for support of the arts in our community and at the Hangar Theatre. This year, CFCU Community Credit Union received the Philanthropic Angel Award “for their continuing faith in the Hangar and our mission … as well as their financial expertise, guidance and assistance in the Hangar’s financial planning.”

The Agda Osborn Award has been described as the volunteer award honoring long-time board member Osborn’s dedication to community service. This year, Sally McConnell-Ginet was awarded the Agda Osborn Award for her contributions as chair of the Hangar Theatre’s Event Committee.

The Tom Niederkorn Award has been presented since 1989 in honor of Niederkorn’s dedication to the success of the theater. This year, it was presented to John Simon for his commitment to educational programming.

The Erin Aljoe Schlather Award is awarded to a young person who has made a significant contribution to the Hangar’s educational programming and sparked the contributions of others. This award was presented to Imri Leshed, a student at Dewitt Middle School, for his consistent participation in the Next Generation School of Theatre.

Broadway’s Next H!T Musical inspires of laughter  in Hamilton

“Broadway’s Next H!t Musical” explodes with laughter as the talented Broadway cast creates a hilarious, unique awards musical. Enjoy an evening with friends and family at the show 8 p.m. Saturday, April 26, with a cash bar starting at 7p.m. Tickets are $20 per person with general admission for seating.

The evening unfolds as audience members write suggestions and ideas during the cocktail hour (7-8pm). The professional cast uses their incredible vocals and talents to create short skits and impromptu songs for a one-of-a-kind musical.