My presence was making people “uncomfortable.”

At least Socrates got a trial.

Not so in my case as I was banished from Greekfest for the high crime of trying to promote Socratic dialogue in pursuit of truth.

If you don’t know about Socrates, that’s ok. He isn’t trending on Twitter and he can’t Snapchat because he’s dead. But in his time, circa 400 B.C., he was a major founder of Western philosophy. Through his patented “Socratic Method”,  he challenged pupils by questioning their assertions and guiding them to their own answers.

Let us then inquire: What went wrong 2,400 years later at St. Sophia’s Greek Orthodox Church on the second night of Greekfest?

My objective was innocent enough. At a festival that overlooks the contributions of the ancient philosophers in favor of traditional Greek food, beer and dancing, I merely sought to offer Socratic-style engagement to the masses. I donned an ancient Grecian-style robe and hung from my neck a poster that read: “Free Socratic Interventions. All Assumptions Challenged Here.”

Upon arriving at Greekfest, I was spotted by a reader who identified himself as “Jay”.

“I love your column,” he said.

“Do you love all my columns?” I probed.

“Usually”, the man who claimed to be Jay said.

“More often than not.”

What emerged through the dialectic was a greater albeit painful truth: “Jay” hates up to 49.9 percent of my columns.

More pain arrived in the form of a church elder who informed me that no signs were allowed at the fesival.

“This is a religious institution,” he said. “We’re not political or anything.” 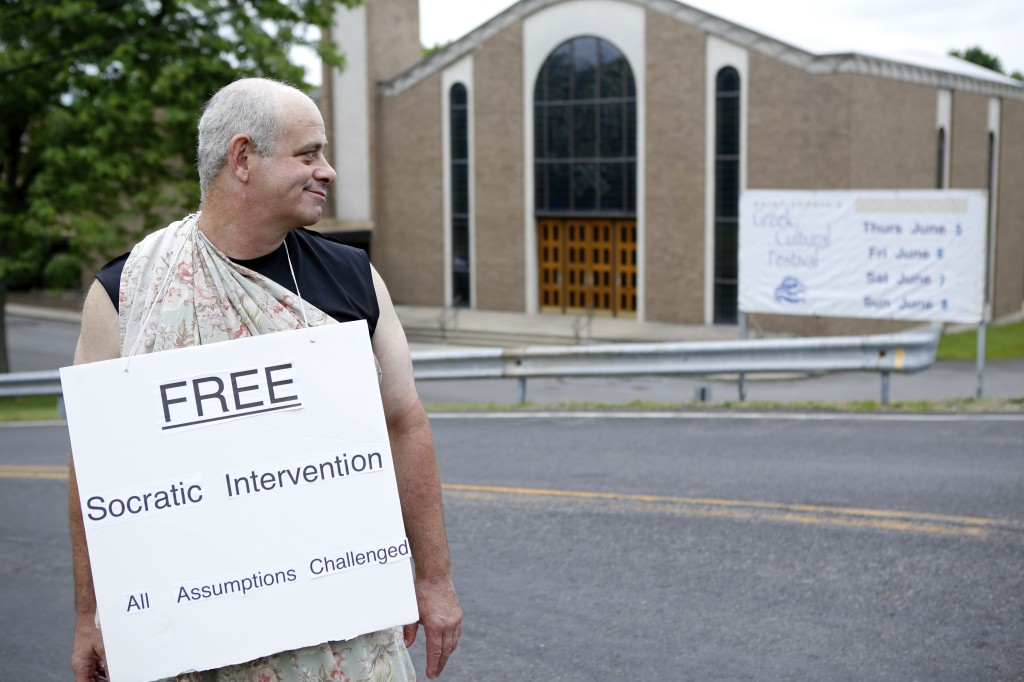 I took the sign from my neck and held it discreetly to my side. The man’s supposition that the pursuit of truth through knowledge is “political” while the orgiastic slamming of beers and baklava in a tax-exempt church parking lot is not begged for Socratic inquiry. But before I could engage, I was approached by a young admirer — male unfortunately. His name was Trevor Pokrentowski, and he would prove to be my finest student. Together, we grappled with a major philosophical conundrum: Was the censoring of my sign the triumph of a single great truth at the expense of multiple lesser truths that would have been revealed through an open exchange of ideas? And we pushed further.

“Are there aspects of existence more important than truth?” I inquired of my precocious disciple.

Then two law officers showed up, or perhaps they were rented Spartans. I told them I was a Syracuse New Times columnist paying homage to Socrates. They looked unimpressed. They said concerns had been raised that I was mocking religion, so we talked about who Socrates was — i.e. a famous philosopher. I assured them that scholarly, Socratic inquiry was my only objective.

“The bottom line is they don’t want you here,” one of the enforcers said. My presence was making people “uncomfortable.”

They asked — told, really — me to leave. The church was private property, they submitted. Just as I could legally dispatch anyone from my property, the church was entitled to eject me from its annual exercise in self-stereotyping.

Had I the stones of Socrates, I would have guzzled a Tall Boy of hemlock tea right then. That’d show ‘em. Instead I tried one last time to nudge the Agents of State toward greater enlightenment. I urged them to distinguish between legal rights and moral virtue. If I hold a public event on my property, even if I have the “right” to make someone leave, does that make it morally just to do so if that person did nothing wrong?

“They want you to leave,” I was told again.

Their patience was running thin, and my toga was slipping, and it was time to go. So, I fled Greekfest with no unifying paradigm. Only more questions:

And how the hell do you correctly pronounce “gyro”?