Dear Old Dad has been taking it on the chin these days (and in a few other places; see below), so as this year’s Father’s Day approached, I decided to take a look at some recent television fathers. What I found really made me miss Cosby.

Let’s take a look at a few examples of today’s fathers according to Netflix.

The dad who lights up many a Sunday night is Donald Draper, the Mad Men superstar whose parenting toolbox is, shall we say, limited. The highly creative Draper is the handsomest man you’d never want to find in your family portrait. He earns the admiration of his colleagues as he lies and cheats his way through an invented life trying to figure out how to sell people stuff they don’t need. He’s so smart that he can keep multiple lives running on multiple coasts, but eventually he tells so many lies he can’t even keep them straight.

Draper can barely even speak to his own children, which is probably a good thing, and he feels free to abandon them for months at a time, entrusting them to his ex-wife and her boyfriend, his girlfriend of the moment or, when all else fails, his secretary. Clearly, children are an annoyance, especially when they sneak in on you when you’re having sex with your neighbor’s wife.

A candy bar eventually prompts Don, (whose real name is Dick) to tell us the story of the horrific conditions of his childhood. His character earns some sympathy when we see how poorly he has been served by the fathers and stepfathers who populated his multiple pasts. Still, unsupervised visitation is not recommended. Don is rarely reflective and barely troubled by the damage he leaves in his wake.

Tony Soprano, on the other hand, built a show around his ambivalence about his mobster life. It is Tony’s need to talk through and make sense of his violent impulses that distinguishes The Sopranos from every other mob show. On the couch (when he is not trying to seduce or assault his therapist),  we hear Tony justify his illegal doings as just part of what every American dad does to help support his family. Murder and theft, torture and extortion are, for Tony, just a way to put bread on the table.

Pressured by more modern 1990s expectations of Dad unlike anything the mid-1960s Draper could ever have imagined, Tony usually absolves himself by burying himself in  his work, getting drunk or telling the kids to leave him alone and go talk to their mother.

My favorite conflicted-dad episode is when Tony drives his daughter Meadow to Maine to scout Colby College. He drops her off and then learns that a mob snitch is hiding nearby under an assumed identity. Like so many parents in this hyperconnected world, Tony feels the pull of his family’s needs versus his professional obligations. So while his dear daughter is getting the campus tour, Tony circles back to find the rat, garrots him with a piece of wire and arrives back on campus to pick up Meadow.

So much to juggle. What father called back to the office for a late meeting during his kid’s soccer game can’t relate to that feeling?

One of the finest fatherhood role models in a blockbuster series, it turns out, is Walter White, of Breaking Bad. Walter changes diapers. He drives his son to school and helps him with his homework. He’s a little bit henpecked by his opinionated wife, but for most of his life, until he learns he has cancer, Walter plays the subservient husband and is a very involved father.

Facing mortality doesn’t just turn Walter into a methamphetamine producer;  it flips his priorities. Suddenly being the nurturer isn’t enough. He goes back in time to assume his primeval role as the provider. In the end, the story says, that is what a man does – he makes money.

And Walter, it turns out, is good at making money, morphing en route into a soulless monster capable of cunningly imaginative forms of murder. Until the final episode he insists that he does all this just to support his family. Very touching. And he’s about as good as it gets. 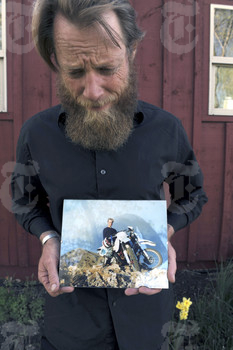 You probably thought that the coverage of the prisoner swap that freed Sgt. Bowe Bergdahl from the hands of the Taliban couldn’t get any sillier. Well, we’re gonna give it a try.

With hardly any facts in hand, the talking heads have spent endless hours debating notions of whether Bergdahl deserted or went AWOL, whether President Barack Obama should have told Congress in advance (Sen. Lindsay Graham [R-S.C.] says Obama should be impeached) and whether the government of Qatar can be trusted to keep its word (spoiler alert: It cannot).

Yet no one has offered a serious review of the beard grown by Bergdahl’s father, Robert, during the years his son was held captive. To enlighten us on this breaking news story, we spoke with  Syracuse’s most prominent beard authority, Jessica Novak. Jess, our music writer and certified beard lover, plays with a band known as Jess and the Beards.

Taking  a gander at the Bergdahl barbe, Novak recoils. “I’m not that impressed. He looks like he needs to wash it.” Not holding back, she continues. “It looks too much like a Brillo pad, a little too unruly for me. It’s a good length, but not well kept. On a scale of 1-10, I’d say maybe a five.”

A tip for the elder Bergdahl from the Syracuse songstress: “ A little conditioner goes a long way on a beard.”