On June 11, just before 7 p.m., 14 people gathered in an upstairs room at the Westcott Community Center. They set up easels, placed pencils, crayons and other instruments within easy reach and waited for the opening of yet another figure drawing session.

Over the past 25 years, the Open Figure Drawing group has met almost every Wednesday night at the center. The occasional cancellation, because of a Wednesday falling on Christmas or New Year’s Eve, is eclipsed by a rock-solid record of longevity. The group consistently draws an average of 15 to 18 people and does it without an attendance policy. 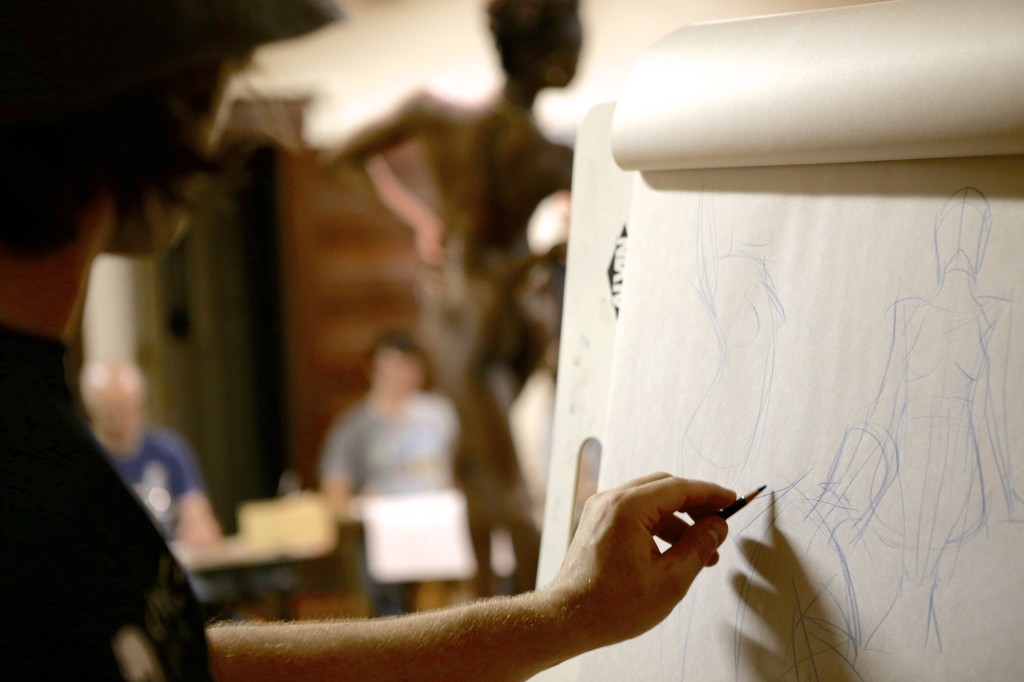 “People come when they can,” said Iver Johnson, who has played an organizer’s role for the group for roughly 16 years. “Some people are very consistent and show up almost every time. Others are itinerant. They come for a couple of weeks and then don’t return for a while. We’re comfortable with various possibilities.”

The sessions combine elements of community and autonomy. They are open to people with varying artistic skills and backgrounds: high school and college students, retirees, folks who make a living in an art-related field, newcomers to drawing. Everyone pays the same $10 fee, with the money going for the room rental and the services of a model who poses nude. At the same time, every participant operates independently, choosing to use a pencil or crayon or to work in watercolor or pastel. 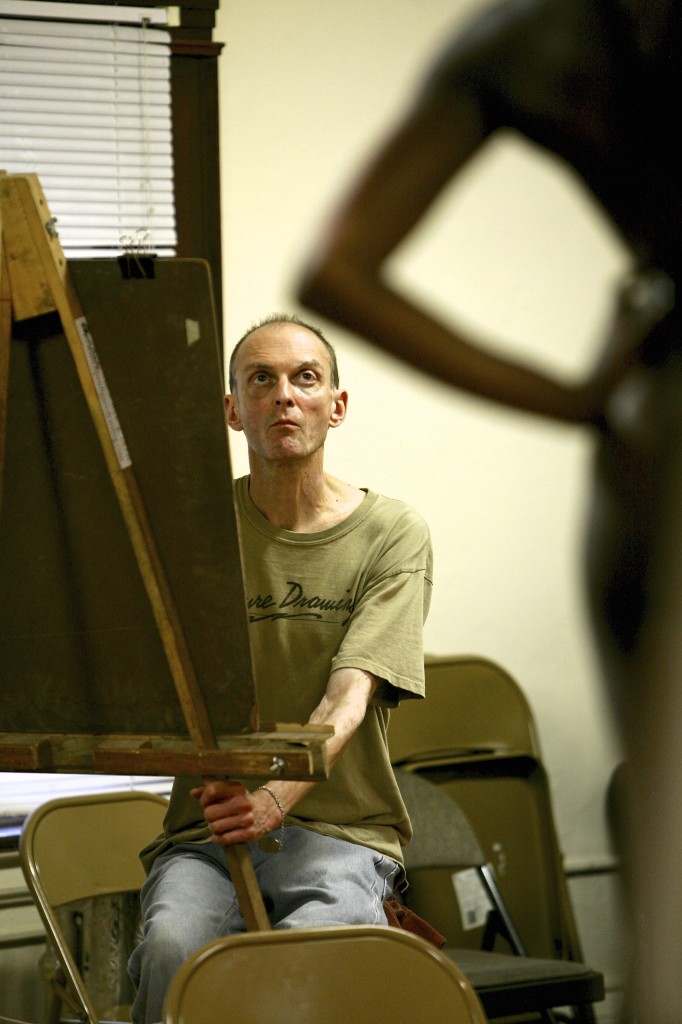 While the Wednesday sessions are the centerpiece of the group’s programs, they are supplemented by other activities. Johnson, in conjunction with members of the group’s board,  has initiated portrait drawing and costume drawing sessions, each held on a Sunday once a month at the center. In addition, a juried exhibition of artwork created by participants will open on Aug. 15 at the Edgewood Gallery.

Open Figure Drawing also worked with film editor Samantha Kraft on a 50-minute documentary, This Film Contains Nudity, which had its premiere June 14 at Eastwood’s Palace Theatre. The movie begins with an extended montage featuring images of artworks by more than 20 participants.

Kraft’s documentary also discusses the group’s early history, when figure-drawing sessions were held at the Community Folk Art Center. When renovation work forced a move from that location, Johnny Robinson, a Syracuse artist, was asked to help out. He arranged a shift to the Westcott Community Center, 826 Euclid Ave. (478-8634), where Open Figure Drawing began its 25-year run.

Robinson thought continuity was essential and pushed the notion of a year-round schedule. He also advocated for evaluating the figure-drawing experience.

“We put in better lighting,” recalled Robinson, who helped with myriad organizational details for nine years. “We worked on improving our relationship with models. We kept looking for ways to improve the quality of the sessions.”

This Film Contains Nudity has extended footage of several Wednesday sessions, which run from 7 to 10 p.m. After the first hour, there’s a break with snacks including chips, dips, and humus, plus some socializing.

“I talk to people I’ve seen here for years,” said Lisa Bogin, a figure-drawing participant for more than 20 years. “It’s like a family.”

The documentary acknowledges the role played by various Wednesday-night models over the years. It has interviews with Michael Affleck and Bogin, who filled in once when a model didn’t show up and currently models for classes at Syracuse University.

What emerges is a perspective stressing respect for models and what they do. It’s a type of performance, an activity that’s more than simply holding a particular pose for a couple of minutes. In an interview separate from the film, Charlie Samuel, a participant who modeled for classes at Syracuse University and Onondaga Community College years ago, stressed modeling as a discipline, one requiring both physical and mental stamina. 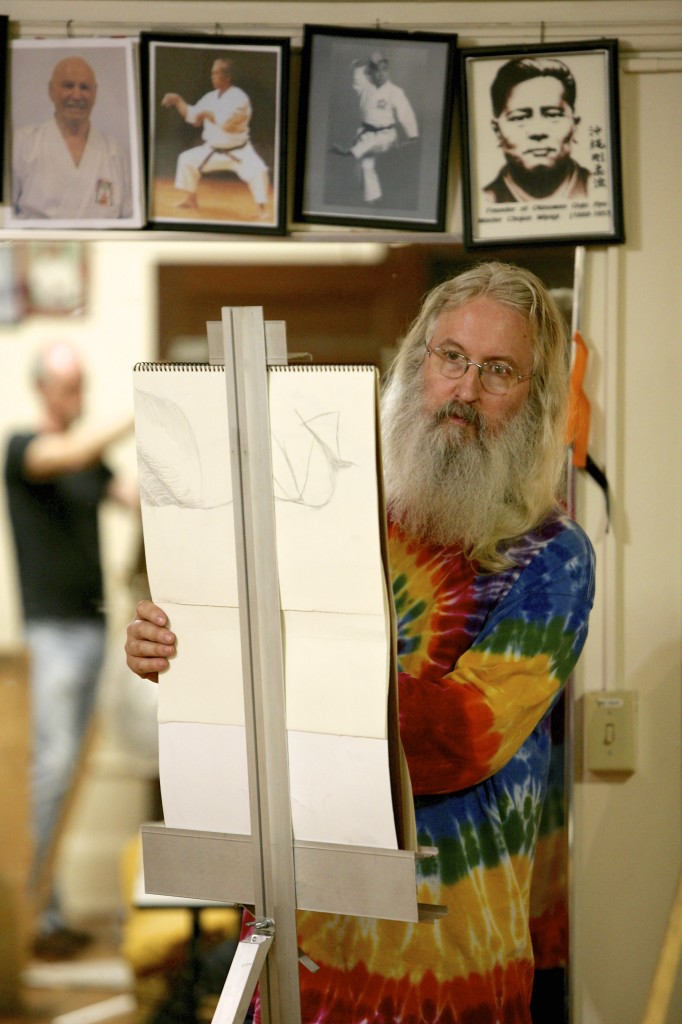 Beyond that, This Film Contains Nudity makes it clear that Open Figure Drawing isn’t holding a class or trying to train its participants. It provides an opportunity to refine skills and to take part in an activity that’s a refuge from work and other aspects of daily living.

“For me, it’s meditative,” said David Hicock, a partner in Animotion, a Syracuse business that has done animation work for more than 30 years. “It offers freedom and growth. It’s therapy.”

In reflecting on 25 years of figure drawing at the same location, Johnson emphasizes both longevity and the group retaining its egalitarian mission and open-door policy. It continues to be a grass-roots organization operating without paid staff. He also focuses on a basic dynamic: People are interested in figure drawing and keep showing up for the sessions.

Robinson, who left Syracuse in 1998 to teach animation at the Rochester Institute of Technology and currently works as a filmmaker, is pleased that Open Figure Drawing has retained its character. “The spirit is the same,” he said. “It’s about supporting people in being creative, combining art with community.”

Collage Show Trashes It Up
Collective Display
To Top