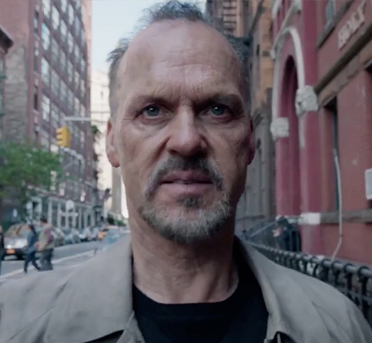 As Riggan Thomson, the return of former Batman plays well

The parallels between the onscreen world of Birdman or (The Unexpected Virtue of Ignorance) and that of the people who are making it happen there in front of you, well, I dare you to go watch this compelling little art movie and not connect the dots yourself.

In fact, to make that process even more lifelike for my dear wife Karen and myself, I chose the Sunday afternoon show at the stark and tiny Manlius Art Cinema instead of the rolling of an opening-weekend showing at the far more plush and expansive Regal chain.

Birdman, from the mind of Alejandro Gonzalez Inarritu, who co-wrote and directed, has been a critic’s and film fest judge’s darling from the start. Set in a Broadway theater, it features Keaton as actor Riggan Thomson, who decades ago was a worldwide celebrity for his portrayal of superhero Birdman but now … Well, now, Riggan is struggling with writing, adapting and starring in What We Talk About When We Talk About Love by Raymond Carver. (Yeah, the writer who also made a name for himself in these parts while teaching up on the Syracuse University hill, as long as we’re throwing real life in here, by the way, and Riggan throws in mention that he briefly met Carver while acting in a student production in Syracuse.) His cast is so-so as it heads toward previews until an enigmatic Broadway star, Mike Shiner, walks through the door as a last-minute addition, to raise potential, tensions and the stakes.

The film is shot in a seamless, one-camera style, and it’s a great thing that Keaton’s in front of it most of the time. He’s totally mesmerizing as the slightly unkempt, slightly unsettled, slightly broke, slightly insecure and somewhat popular actor. Remember that in real life Keaton, 63, was Batman in the first two films in that superhero franchise. He has taken a hiatus from film-making to re-evaluate life and fame. This here is an art film, not an action-adventure flick. Michael Keaton looks comfortable playing the uncomfortable Riggan Thomson.

The film has its funny moments amid its high drama, thanks to Keaton’s ability to draw genuine dry humor out of some dire situations with his talented co-stars. Edward Norton is bratty as the Broadway genius who thinks he’s better than the movie celebrity and thusly will be the smartest guy in the room. And Mike Shiner is smart enough to know he’s got a boatload of baggage, too.

Emma Stone is sly and solid as Riggan’s me-generation-savvy daughter Sam, fresh out of rehab, hired by dad to be an assistant on the play so he can both keep an eye on her and make up for missed time together when he was Birdman. Zach Galifianakis is just flighty enough as Riggan’s best friend and attorney who must work hard to keep the play afloat financially and his pal’s mental deck playing with all 52 cards. Others pitch in ably, too, particularly Naomi Watts as Lesley, Mike’s girlfriend and co-star in the play; Andrea Riseborough, as Riggan’s girlfriend and another star in the play; Amy Ryan, as Riggan’s ex-wife and Sam’s mother; and Lindsay Duncan as a snooty New York Times theater critic.

Riggan wants to make it right with Sam, and his maybe ex-wife, too, and he thinks — hopes, really — that staging this play is the right thing to do as so much swirls around him.

Cinematographer Emmanuel Lubezki takes us to many interesting places in the midst of that swirl, with a steady drum line beat to accompany his intriguing eye. Birdman soars in a beautiful world. Dark as it may seem in some moments, there’s always some light hiding somewhere.