Beyond The Pale at Edgewood Gallery

The Edgewood Gallery‘s new exhibit showcases work by three veteran artists, all of whom have substantial portfolios. Yet Beyond the Pale is most interested in the creative present, in current developments for Amy Bartell, Linda Bigness and Todd Conover.

Bartell, for example, has created paintings, murals and other artworks. Her pieces at Edgewood come from “Archaeological Memoir,” a project that began almost 11 years ago, just after her mother’s passing. She studied maps, seeking objects that provided a sense of place and time.

The project’s current phase features works, typically ink and gouache on clapboard, that depict fish skeletons. These aren’t anatomy-style depictions. Instead, the pieces present whiter-than-white bones positioned against earth-color backgrounds of green, orange or red. One set of bones is long in the manner of a tree, another short and squat in the shape of a hydrant. 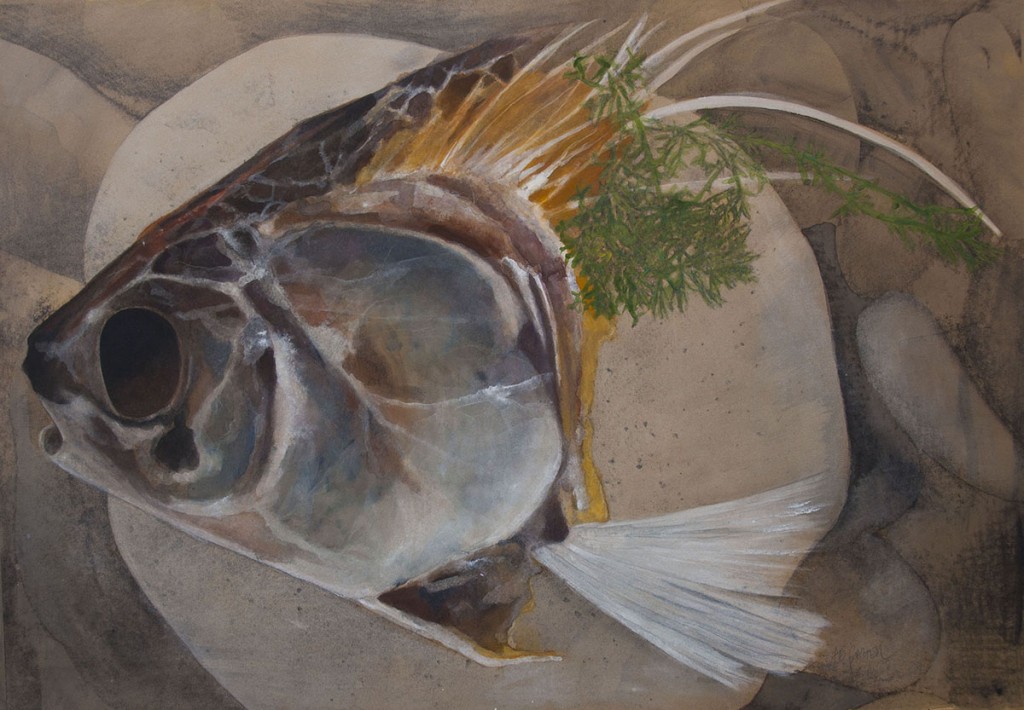 Amy Bartell, The Time It Takes

Each work offers an intimate view of bones, a portrait. Bartell has focused on bones as remnants of once-living creatures, objects that still exist in their own right. She doesn’t see them as mere reminders of a being’s death. Rather, she perceives bones as visually interesting, even delightful.

“The Chapter of Bones,” to use the artist’s term, isn’t based on a master plan developed long ago. As Bartell walked on the shores of Lake Ontario, she came across skeletons of small fish. Ultimately, she decided to investigate these organic forms and begin work on the portraits.

Bigness, meanwhile, has long worked in an abstract style and demonstrated an ability to skillfully improvise. She plays with color, texture and shapes, mixing in geometric forms, found objects like twigs, and tiny loops suggesting letters. In the current exhibit, most of her pieces are encaustics, created in a process that begins with heated beeswax, adding colored pigments to it and applying the paste to a surface.

At Edgewood, her works basically make up a buffet. In “Urban Edge,” Bigness combines orange, red and purple colors with shapes suggesting buildings. In “Sanctuary,” she blends loops hinting at writing and shapes whose outlines can be seen as a church and a cross. A third piece, “Captured Flutes,” emphasizes texture and organic material, sticks.

Elsewhere, the artist works with rough colors and swirling shapes in “Hidden II,” with long, vertical segments in “Border Crossing.” And “Migration,” a horizontal work, conveys a blurred vision of tiny figures journeying across land. While the artwork doesn’t offer commentary on either demographics or immigration, it does engage viewers and encourage them to consider an important social phenomenon. In the end, the piece is subject to interpretation.

That notion also applies to “Pedological Garden,” in which a long shape runs through it. That could be a snake and thus suggestive of the Garden of Eden. It also could be something very different.

Todd Conover has long had an intense interest in design: He had a 15-year stint as co-owner of a fashion design business. His pieces in the show, sculptures and jewelry, are based on metalsmithing tradition. One work positions a chain-mail lamp on stone. Others include a pierced box utilizing copper and jade, and a vessel with Japanese enka patina. The pieces, visually and conceptually interesting, reflect an affinity for metal and for possibilities of combining it with other materials. 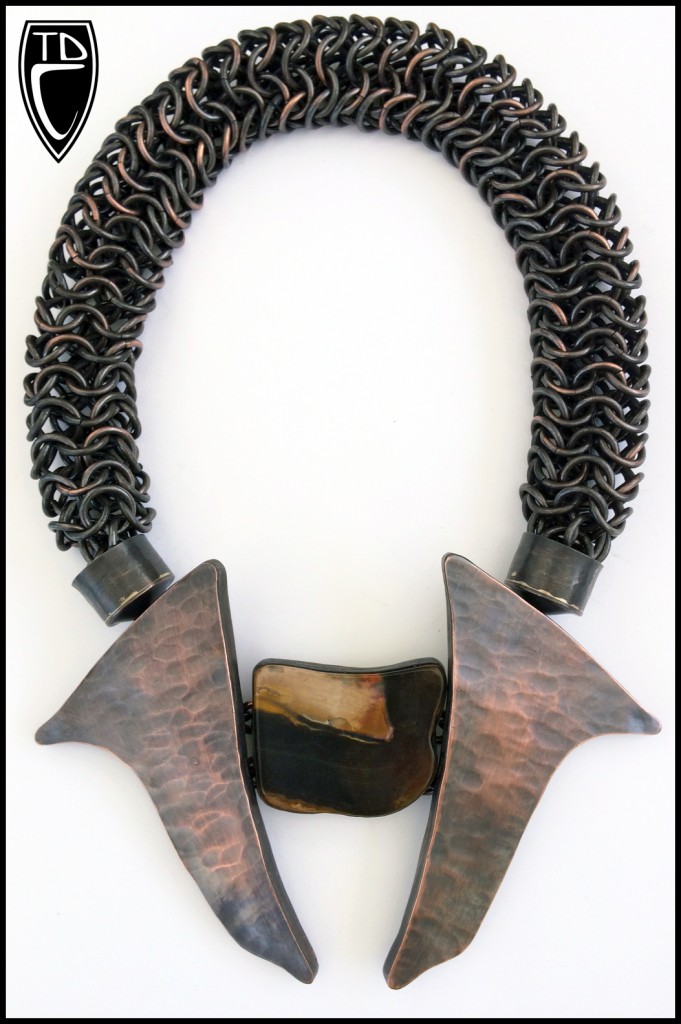 His jewelry, it should be noted, is on display both at Edgewood and in the faculty show Conceal/Reveal on campus at Syracuse University Art Galleries. Conover has necklaces, pendants and other work in that exhibition.

Beyond The Pale builds its appeal on several levels. It provides full display for the trio’s artworks. Even more importantly, the exhibition communicates vitality, a sense of artists thriving during a positive, productive time.