Friends, neighbors, thespians, politicians and fellow activists gathered in front of Syracuse city hall, decorated with a purple stair runner and purple petunias, on Wednesday, June 3, to raise the rainbow flag in memory of Earl Colvin, who died on Sunday, May 24, at St. Joseph’s Hospital. He was 82 years old. 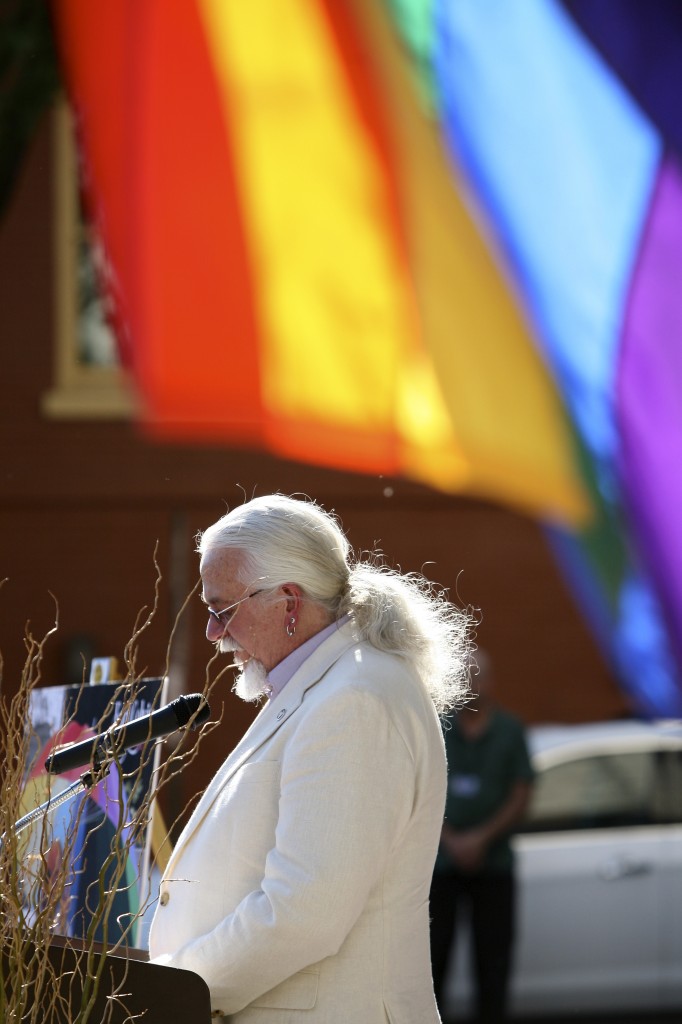 One of Central New York’s prominent activists, Colvin was eulogized by community members and friends including Mayor Stephanie Miner, Common Council president Van Robinson, activists Harry Freeman-Jones and Bonnie Strunk, as well as his partner of 40 years, Joel Rinne, amongst others.

“Earl was Syracuse,” described Miner as she introduced friends and community members who shared their memories of Colvin.

Local actress and singer Patricia Catchouney lended her voice in opening the celebration with “I’ll Be Seeing You” and closing with Colvin’s favorite song “Somewhere Over the Rainbow,” as the rainbow flag was raised in his honor.  A manager of movie theaters in the 1950s, Colvin was also a Korean War combat veteran, a singer, actor and printer. He owned and operated The Printer’s Devil with his partner Joel for many years on the city’s north side, as well as Theatre a la Carte, a community theater in the 80s and 90s.

“Earl was many things to this community,” said civil rights activist Bonnie Strunk from the podium. “He wore many, many hats and made so many contributions to our community, and made it a much better place.” 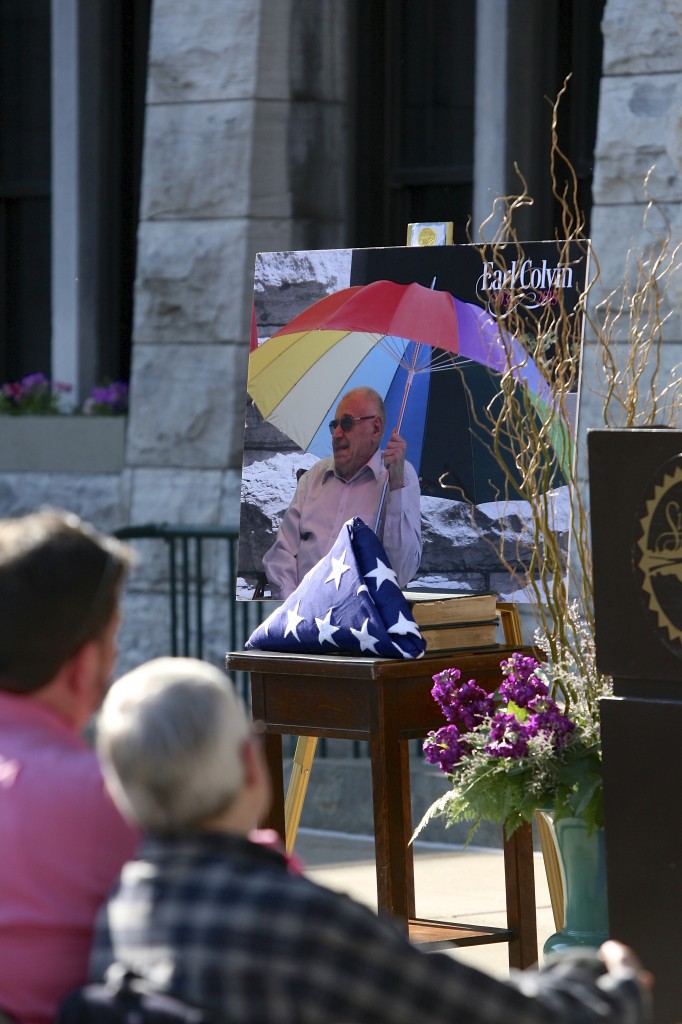 Colvin came out of the closet in the 1970s when a local television station interviewed him about a picnic in Thornden Park that saw some stones being thrown. He went on record as Earl Colvin because he felt the media would not portray the events accurately. At the time, most LGBT individuals would be known by their first name and last initial as a form of anonymity. Going public with ones full name came with implications.

After giving his side of the story on camera as a gay man, he was issued a pink slip upon returning to work and lost his job. Colvin went to the Human Rights Campaign and was told there was no protection for openly gay citizens. While this may have deterred others, it energized Colvin on his lifelong path in becoming a gay rights pioneer.

In 1976, he became the first openly gay man to run for Congress on a platform of “Human Needs, Human Rights, Human Dignity.” He also ran for Mayor of Syracuse against Lee Alexander in 1977. He lost on both counts, but continued on his quest for LGBT equality. His advocacy helped pass laws so gay people couldn’t be fired for being gay, amongst numerous other initiatives.

“Earl realized this was going to be a life long struggle and he gladly embraced it,” Strunk said. Along with Strunk, Colvin also helped establish the LGBT booth at the New York State Fair.

Fellow trail blazer Joel Rinne memorialized Colvin as only a lifelong partner could. “Earl always said he was the mouth and I was the brains,” Rinne said. “I’m always going to remember the minute I met him. It was my first gay movement meeting in Syracuse. I knocked on the door and out came Earl wearing an iron-on Robert Redford t-shirt. He was in charge – and everyday since he’s been in my life.”

Together they operated the Printer’s Devil, ran political campaigns and operated Theater a la Carte.

Speaking of Colvin’s activism, sense of humor and love for theater and film, Rinne shared anecdotes about their life together to laughs and tears from the audience. 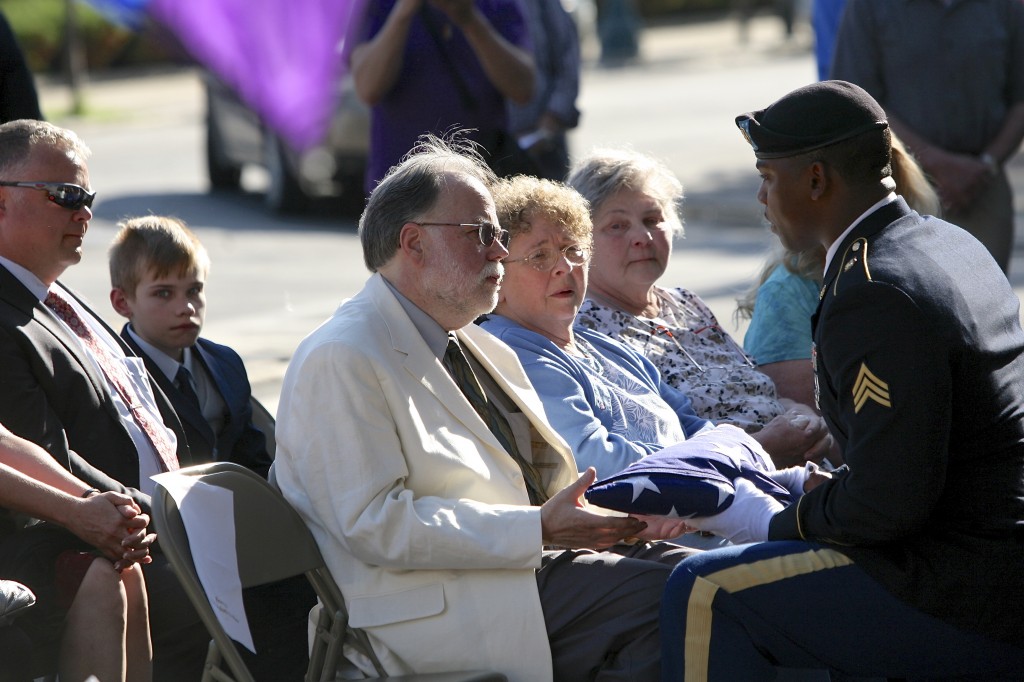 Members of the military guard from Fort Drum presented Rinne with an American Flag following the rainbow flag raising over city hall, another action Colvin helped establish in Syracuse. Mayor Miner invited those in attendance into City Hall for a reception following the ceremony. Inside were photos of Colvin’s life and work, including old theater posters, and other items that barely scratched the surface of a life fully lived.

(Note: Earl Colvin was a personal friend of mine. Having met Earl in my teenage years through Theatre a la Carte, he became a mentor to me for everything from theater to activism and politics).

Ease on Down the Road
News and Blues
To Top