Max Ginsburg’s showcase at the ArtRage Gallery features work by an artist deeply interested in everyday people and in issues such as poverty and war. His oil paintings for The Realities of Our Times reflect a choice of vivid colors, an eye for detail and a talent for composition.

For “Bus Stop,” a large oil depicting 10 people waiting at an urban street corner, Ginsburg energizes the scene. One man wears a blue shirt and beret, which contrasts with others’ clothing, including a white T-shirt, red blouse and green jacket. Some people simply gaze down the block while a few do something: smoking a cigarette, reading a magazine or drinking a cup of coffee. Ginsburg also communicates a sense of personal space, of how closely people stand to each other. Finally, he’s portrayed a range of city residents, one of them a man on crutches who asks for money.

In “Unemployed on Line,” a 40-by-80-inch painting, the artist portrays a dozen people and plays with a visual hook: the subjects’ hands. Our eyes move down the line, from a man who holds a cellphone with one hand and gestures with the other, to a young woman who touches her boyfriend’s upper arm as he grips a newspaper. A third man has both hands in his pockets. 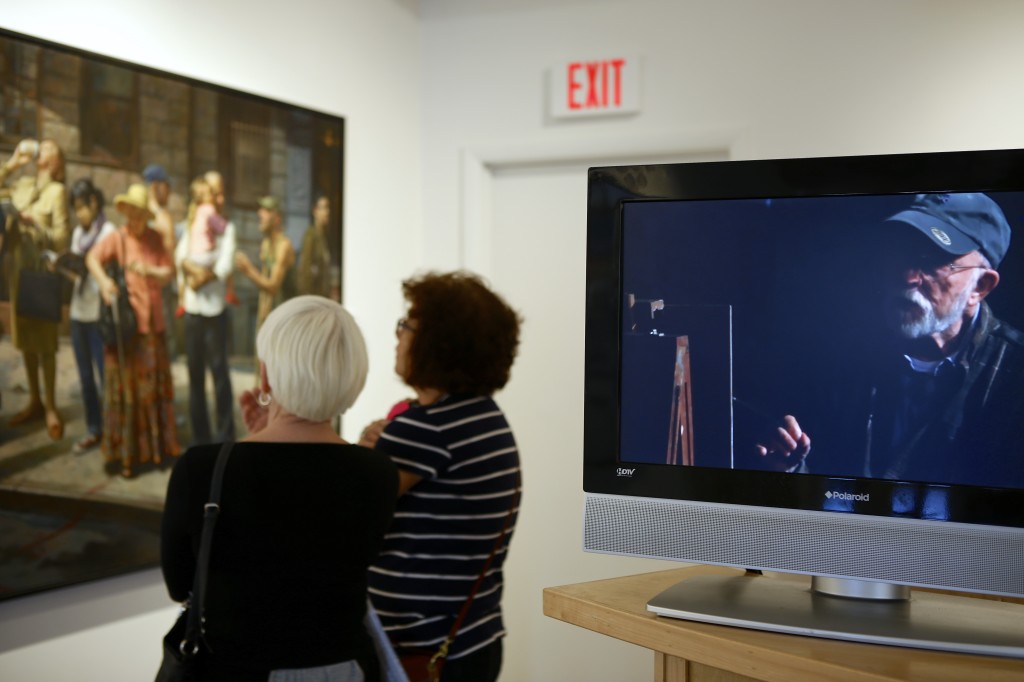 Other pieces document Ginsburg’s varied compositional strategies. For a work depicting young men playing basketball, he pushes in a wall and a fence, creating a closed-in look. In another painting, he portrays a homeless man sleeping by a wall, next to a shopping cart containing his possessions. Just across the street, the artist mixes in a pile of fluffy snow, part of a wintertime scene. And in the oil titled “Coffee Break,” he depicts a young veteran who wears an Army jacket and holds an anti-war sign. A U.S. flag hangs over his shoulder.

Ginsburg, who graduated from Syracuse University in 1953, is a longtime observer of Manhattan streets and often integrates street scenes into his paintings. One of them, set in a park, portrays a personal-care worker walking with an elderly woman while a short distance away two nannies push strollers and talk to each other. In addition, that piece touches on Ginsburg’s interest in people at work. Over the years, he’s depicted a janitor and members of a demolition crew, among other subjects. 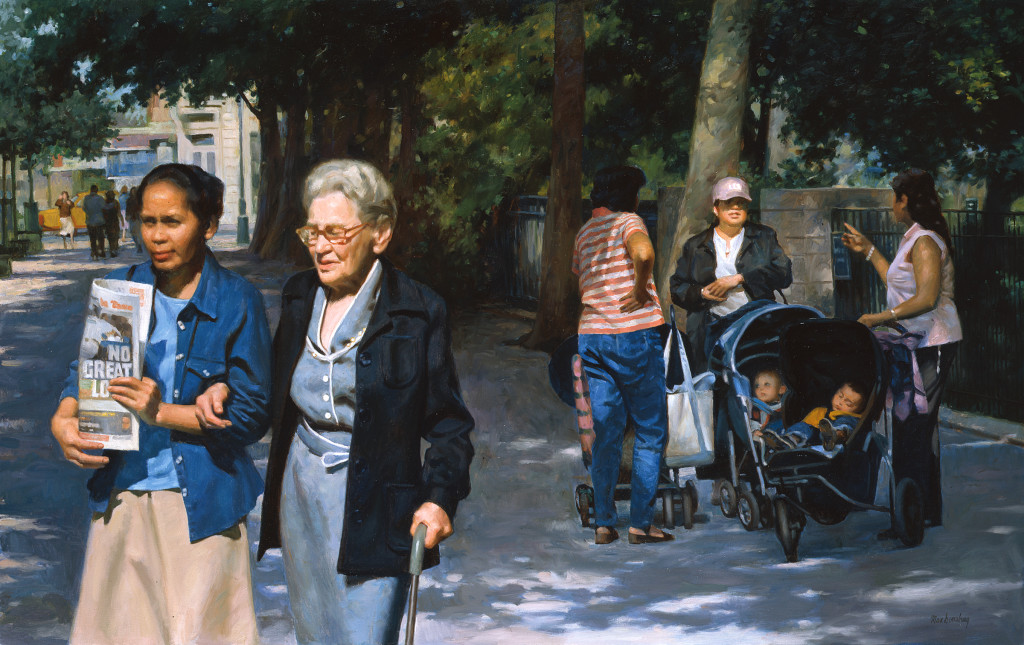 “War Pieta,” the most emotional of the paintings at ArtRage, depicts a mother weeping over a soldier who is badly wounded. In the background, an oil field has been set afire, as smoke billows into the sky. The work references the Iraq War, which began in 2003; it also engages war in general.

The exhibit offers a full exposition of Ginsburg’s social realism style. He sees no need to refine or romanticize what he sees. His work centers on genuine interest in ordinary people’s lives and the ability to transform that interest into dramatic, intriguing paintings.