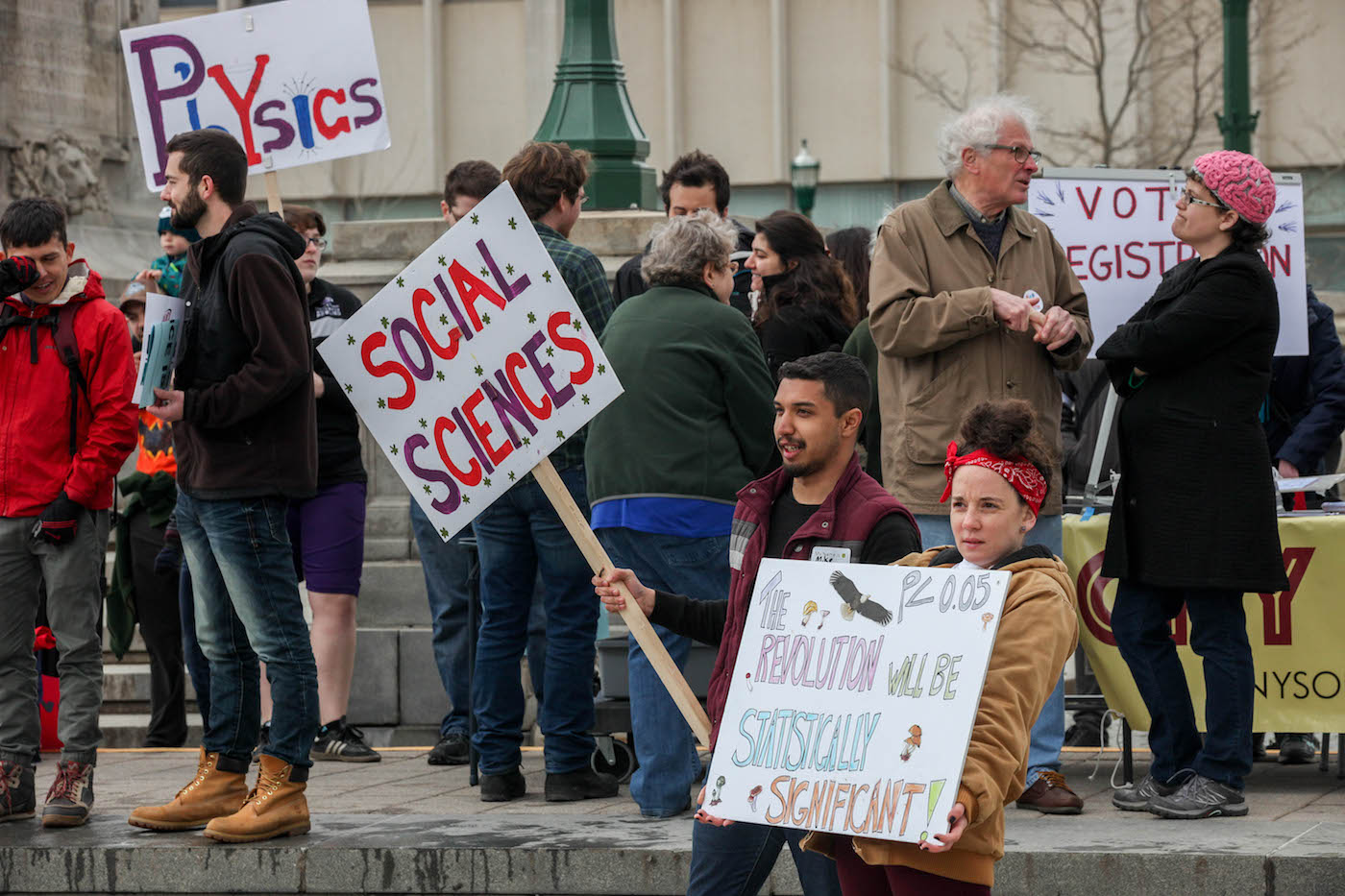 March for Science at Clinton Square drew more than 1,500.

Dave Knittel went to Syracuse’s March for Science on Saturday, April 22, with two messages. The former Syracuse City School District teacher wore a white lab coat decked with plastic bugs, a plastic lab rat and a chest pocket with pens, calculator and test tube. His first message was about the importance of science.

“I really enjoyed teaching science and watching students get excited about the world,” he said, chomping on a pipe that, with his gray hair and mustache, made him look vaguely like Albert Einstein. The Trump administration “dismisses science,” he said. “Denying the facts of science is frightening.”

Knittel carried a sign with a local, personal message, too: “Thank you Steve Effler.” Effler, founder of the Upstate Freshwater Institute, studied Onondaga Lake for decades and was a strong advocate for restoring the lake. Effler died April 14 at age 70. 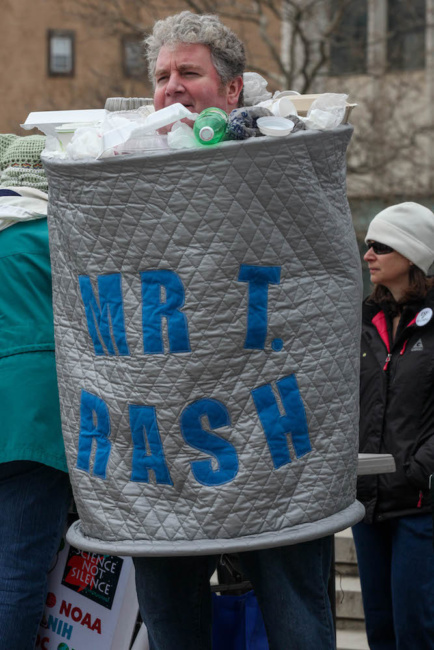 A protester at the March for Science at Clinton Square. Michael Davis photo | Syracuse New Times

“We’re here for him,” said Knittel, who attended the event with his wife. “We admire his efforts and what he’s done to change the condition of the lake.”

An estimated 1,500 attended the two-hour event at Clinton Square. It was one of more than 600 events worldwide, fueled by concerns that President Donald Trump’s policies threaten the environment and that his proposed budget will cut funding to agencies working on science. The main March for Science, timed to coincide with Earth Day, drew thousands to the National Mall in Washington, D.C.

Organizers, including New Feminists for Justice and the Undergraduate Student Association of State University of New York College of Environmental Science and Forestry, invited people to dress as their favorite scientist. Few took them up on that, although the crowd included lots of people wearing lab coats.

The crowd listened attentively to speakers, most of whom stuck to their three-minute limits, and representing a variety of scientific fields. Jack Manno, a professor of environmental studies at ESF who has worked for many years with the Haudenosaunee, encouraged the crowd to respect indigenous science. “Let us engage the power of indigenous and Western science on behalf of the earth,” he said.

Marvin Druger, Syracuse University professor emeritus of biology and science education, listed science’s contributions to society, including the Human Genome Project, development of lifesaving drugs and measuring climate change. “I can’t imagine what discoveries won’t be made if science and science education don’t continue to get support,” he said.

Caitlin Cunningham, a statistics professor at Le Moyne College, and her husband, Jonathan Needler, a Le Moyne mathematics professor, brought their two young children to the march. Cunningham, who is working on a National Institutes of Health-funded project, worries that the Trump administration doesn’t value scientific research.

“We’re both teachers and we care about science being taught well,” she said. “We want students to be able to think critically. We teach facts.”

On Saturday, April 29, 11 a.m. to 2 p.m., the People’s Climate March will take place at Franklin Square Park, Solar and Plum streets. The local march, which is presented in conjunction with the national march in Washington, D.C., will begin at Franklin Square and proceed via the Creekwalk to the Inner Harbor. There will be speakers and information tables, music by Colleen Kattau and friends and the Riverstone Trio, electric/hybrid cars and food trucks. The march is sponsored by Climate Change Awareness & Action and the Sierra Club.