Syracuse Chiefs Manager Billy Gardner Jr. is a true baseball lifer. He grew up around baseball because his father, former major-league infielder Billy Gardner Sr., managed in the minors and then the majors with the Minnesota Twins and Kansas City Royals. After two years as a minor-league player, Billy became a coach and has been a minor-league manager for the last 20 years.

This is Gardner’s first year in Triple-A, and with less than two weeks remaining in the regular season he has the Chiefs positioned for their first playoff appearance since 1998. New Times reporter Matt Michael recently sat down with Gardner to talk about his father’s influence on his managing, his successful first year in Triple-A, and why he’d rather see one of his players get called up to the big leagues instead of him. 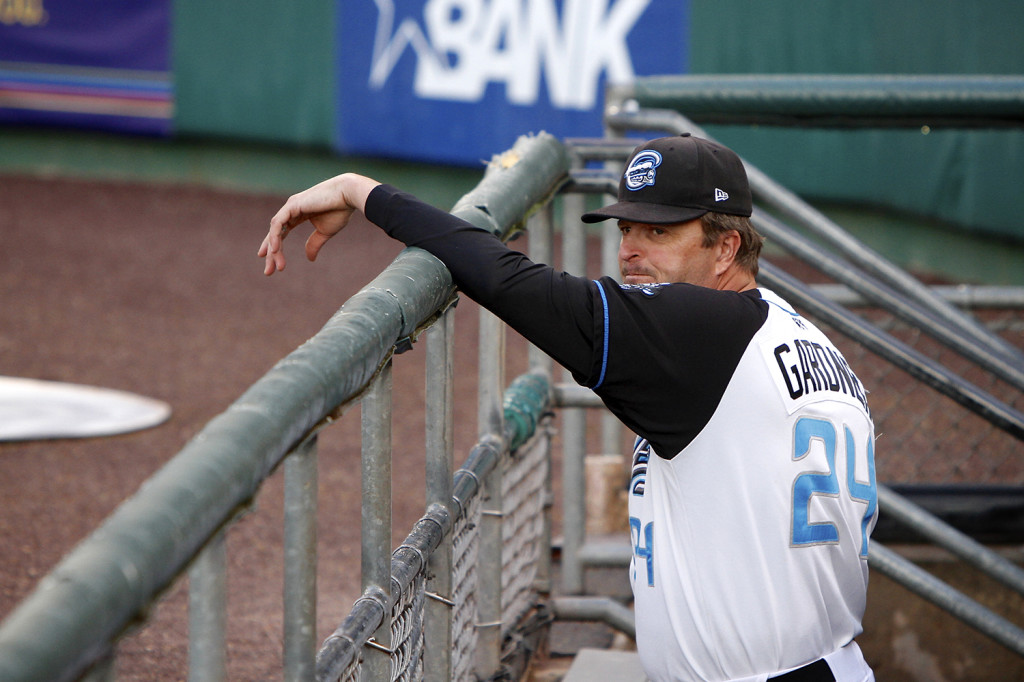 Matt Michael (MM): Your father retired as a player before you were born, but managed in the minor and major leagues when you were growing up. What was it like being a manager’s son?

Billy Gardner Jr. (BG): He was in the minor leagues and I was 6 or 7 when I started floating around with him. I can remember going to Jacksonville, Omaha and then when you get a little bit older you start getting into Little League and your own baseball thing so that took a little time away from traveling with him. Eventually, he took over Minnesota and I started following him around there, and then we’d go to New York or Boston because they were only a couple of hours away from home (in Connecticut). So I’d spend a lot of time on the field and in the dugout, kind of absorbing that whole major-league atmosphere.

MM: What do remember most about that time?

BG: I think the most enjoyable time was obviously, number one, having a chance to spend time with my dad on a baseball field. He was in the game for so long, he traveled so much, just to have that opportunity to be around him and get into a uniform was memorable.

But I think when the Minnesota Twins decided to go with a lot of young kids and play some rookies, and this was a time when Calvin Griffith was the owner and he was kind of a dinosaur owner and he wasn’t going to pay the big salaries. So he said, listen, I’m just going to bring up all the kids and we’re going to let them learn in the big leagues and develop in the big leagues and hopefully it’ll pay off in the end, which it did. So I spent time with Kent Hrbek and Kirby Puckett and Tom Brunansky and Frank Viola and all those young kids and they were great to me. We had a lot of fun, and that was probably the most memorable time for me, just being around all of those young, wet-behind-the-ears guys in the big leagues for the first time and then to see them go to the World Series and have real good careers.

MM: What’s are the qualities you learned from your father that you still apply today?

BG: A sense of humor, which is important. Patience. I took a lot of things from him: the ability to connect with people; to be outgoing around the clubhouse; cutting up with the guys. He had spent a lot of time in the minor leagues and that’s where he honed his craft. It’s a little different now, you don’t have to go there (the minor leagues) to learn how to manage anymore.

MM: You were named the Southern League Manager of the Year in 2012, 39 years after your father won the same award. That had to special.

BG: It was kind of a special deal, but I’m not really into the whole award thing, to be honest with you. I’m uncomfortable in a lot of ways, because the players make the manager. Although this is still a development business we’re in here, you have to have good players. Winning is a byproduct of doing things right and you’ve got to go do things right and you’ve got to have talent to win. So those kinds of awards, I’ve never really put a whole lot of stock in. 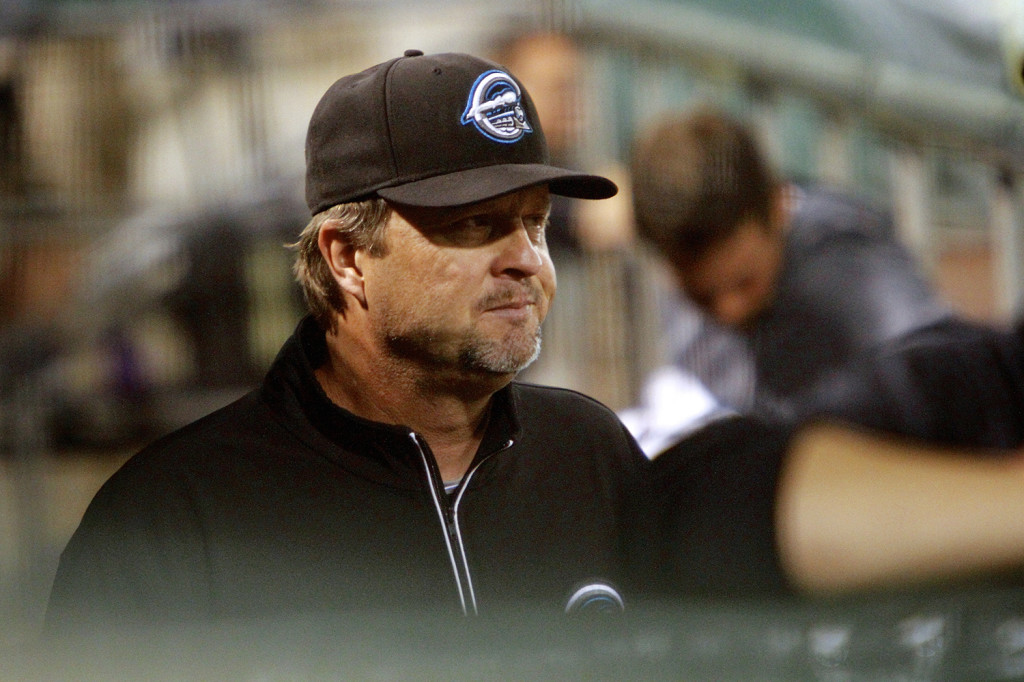 MM: You’ve managed 20 years in the minor leagues. How have you balanced the need to develop players with the desire for the team to win?

BG: I guess it comes through experience. We’re here to finish players off and get them ready and prepared to play at the major-league level. That’s what it’s all about. You never want to win so bad that you really hurt somebody’s development. That’s the balance you have to strike. We take the 25 guys we’ve got that night and we do everything we can to win a game. It’s a develop-to-win type of attitude, but again, it’s not always all about winning. It’s about getting guys better and getting to the big leagues.

MM: And how has that worked for you this year in your first year in Triple-A, where you’re trying to get players moved up to the parent Washington Nationals while winning in a city that’s starved for a winner?

BG: That’s been the one thing that I’ve found is different about this level and Double-A. Double-A is really a crossroads, they don’t quite have it figured out, they’re still wet behind the ears and green. Here, you’ve got more of a finished product, more mature guys, they know what’s going on, they get it. The biggest challenge to me is keeping things positive and telling players who don’t get called up, or felt like they should have been called up, hey, you’re not there yet, you’ve got to take a couple more steps to help you get over that wall. Keep their spirits up, because it’s very easy to get down when you think you should be the guy to go up and you’re not. There are certain things you can control, and that’s how you play. You can’t control what’s going to happen as far decisions that are going to be made at the major-league level. That’s what I really try to harp on with these guys.

And there’s 29 other teams they can play for. They go out every night and there’s scouts in the stands. I think when you’re drafted by a certain organization, you feel like that’s the team that you’re going to end up in the big leagues with and it doesn’t always work out that way. It’s hard enough to get to the big league as it is, the attrition rate is off the charts. But there’s other teams out there and if you go out there and perform well and play hard and work and be a good teammate, those other teams pick up on that and maybe you can be the guy in a trade or an extra piece in a trade.

MM: Why has this been such a special year for the Chiefs?

BG: I think they all, from the get-go, had a common goal in mind and that was to go out and compete and win the division and get to the championship. I think that common goal has been there the whole time. We have great chemistry in the clubhouse, and we have really solid veteran leadership in the clubhouse. I’m the manager and I have to lead, but it’s important having the veteran guys in the clubhouse helping you do that. Especially when you get players who come up and they’re not quite up to speed on how it works here and how we do things, they help them get into our program and they’ve done a great job with that all year. But I think the biggest thing with this team is they get along so well, they pull for each other, they play hard, they compete, they play to the last out and as a manager that’s what you want. Yeah, if you do things right you’re going to win, like I said. But you want them to go out there and compete and give everything every night and they’ve gone out and done that.

MM: I’m sure you’re aware of the Chiefs’ playoff history with the last playoff appearance in 1998. Is getting to the playoffs something the coaching staff and players have talked about?

BG: I don’t think we’re quite there yet. I know some media people have brought up some questions about that. We’re trying just to stay in the moment, you know what I mean? Because that’s all we can do. There’s still a lot of baseball left, there’s some good teams out there, they’re all in the mix, there’s going to be a dogfight, but we don’t want to get out in front of ourselves by any means. We just want go out there and do everything we can to win ballgames and that’s all we’re going to focus on.

MM: If you do make it, how will it help the Chiefs’ players to participate in the playoffs?

BG: I think that’s a valuable experience for any player to go through, to get into a playoff environment where every pitch, every out, has more importance than it does during the regular season. And if you’re in a situation like we are, we’re at the point where we want to get there and when you get there it’s just a different ballgame. And it can really help these guys down the road when they do get to the big leagues and you’re on a team that gets in the playoffs, it’s something you can look back on and draw from it. 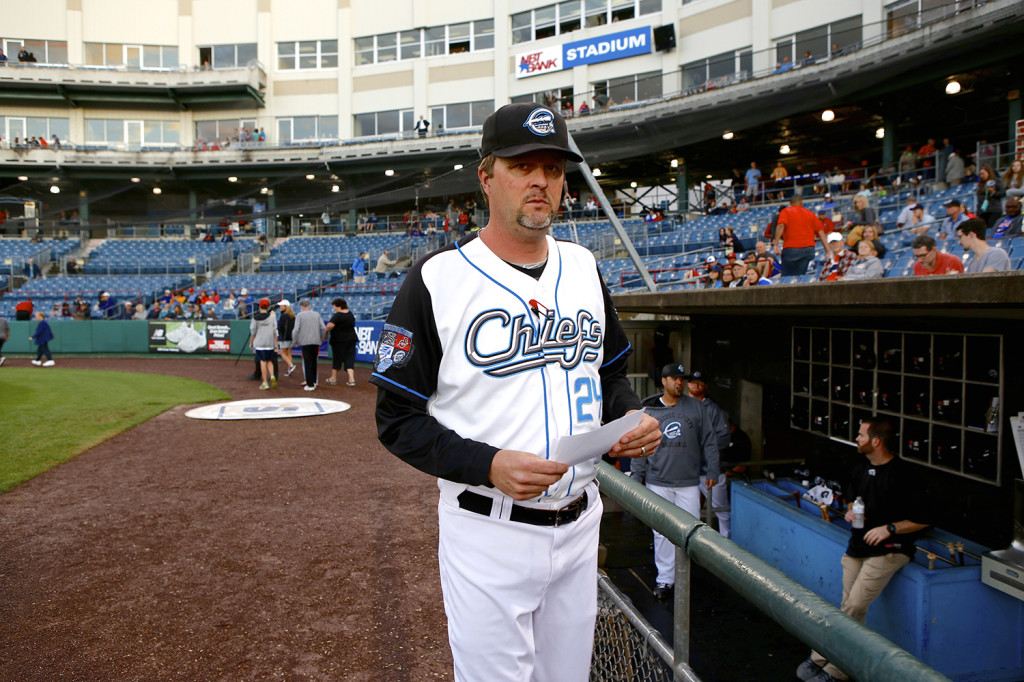 MM: Have you thought about what it would be like to coach or manage in the major leagues?

BG: I’ve never looked at that. If it happens, great, and if it doesn’t, I really enjoy the teaching part down here. I enjoy the minor leagues, I have fun, it’s teaching and trying to make a kid better and getting him to the big leagues. I really don’t spend a lot of time thinking about where I’m going, to be honest with you. What you need to get there is somebody that’s got to say, hey, listen, I want to take this guy along. It’s not what you know, it’s who you know. If it happens, great, if it doesn’t, I’m not going to be disappointed. I do the job I have, I do it to the best of my ability and I continue to move forward. That’s how I look at it. I know some guys that spend a lot of time in the minor leagues and they get a little disenchanted because they haven’t had an opportunity and I get that. But I don’t spend too much time worrying about it.

MM: So your reward is calling a player into your office and telling him he’s moving up the next level – in this case the major leagues?

Billy Gardner Jr. is looking to become the first manager to lead the Chiefs to the International League championship since Bobby Cox in 1976. Last month, Cox became the first former Chief in the modern era to be inducted into the National Baseball Hall of Fame in Cooperstown (Cox played for the Chiefs in 1970 and managed Syracuse from 1973-76). “Sunny Jim” Bottomley, who played for the Chiefs in 1938 after his major-league career ended, is the only other former Chief in the Hall of Fame.