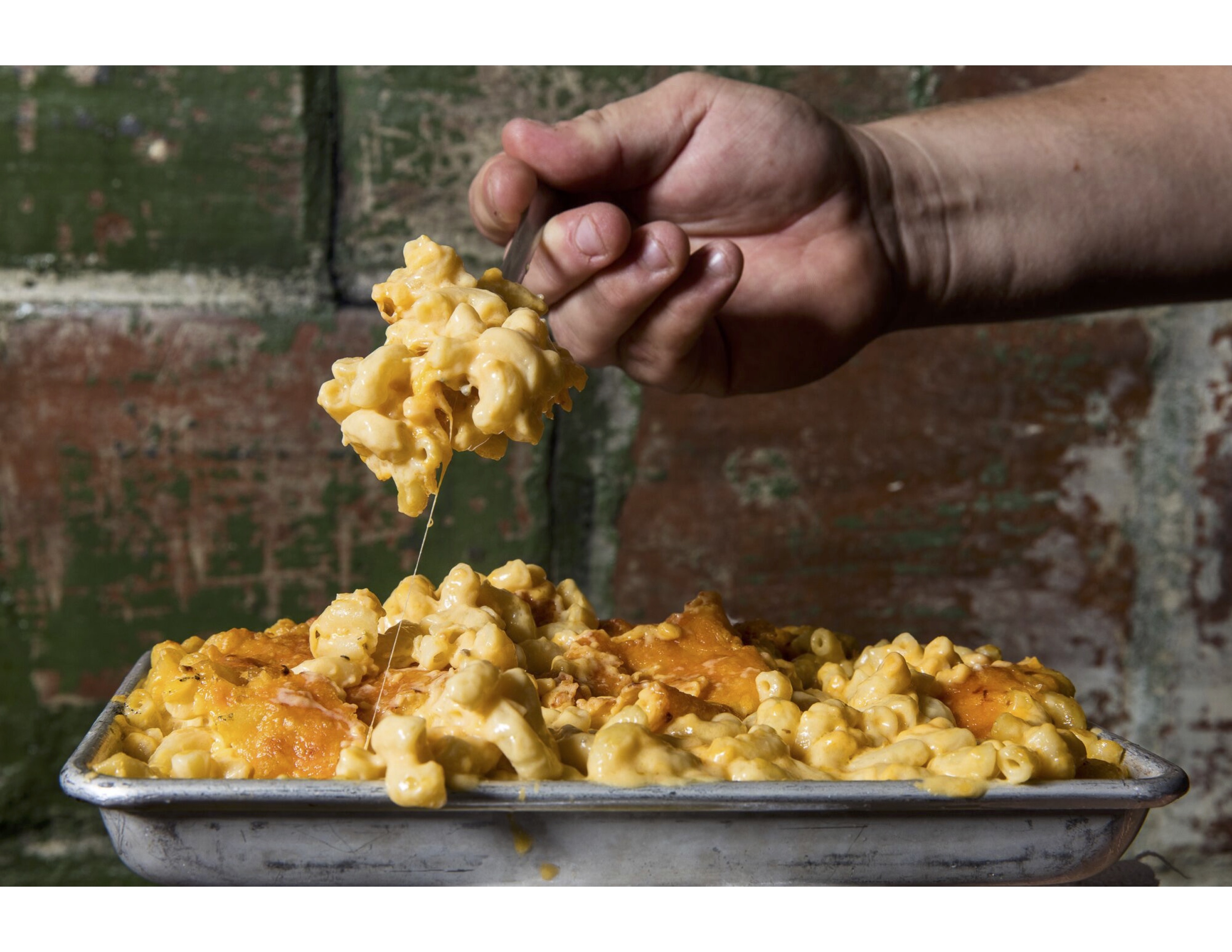 Healthy is not the goal of comfort food. Meatloaf and mashed potatoes, chicken pot pie, mac and cheese: These good old American dishes warm the belly and bring comfort like no other. Calories be damned.

Macaroni and cheese is a natural go-to on cold days in Central New York because we already tend to have the basic ingredients in the fridge and pantry, including butter, milk and flour for the roux, plus cheese(s) and pasta. In the words of the old Kraft Macaroni and Cheese TV commercials: It’s nice and cheesy and it’s really pretty easy. But homemade is definitely better than from a box.

There are as many kinds of mac and cheese as there are people and pasta shapes. Some like it creamy. Some like it baked, with a crusty breadcrumb topping to cut through. Some like it saucy. Others like it dry.

Some go so far as to mix in mascarpone cheese or ricotta cheese to make it more “velvety.’’ Some add vegetables, like cauliflower and broccoli, and some make vegan “mac and cheese” using vegetable purees, tofu and/or dairy substitutes. Some make it with whole grain pasta or substitute ancient grains for pasta.

The first menu at Armory Square’s The Stoop Kitchen, 311 W. Fayette St., which opened in October, featured freekeh “macaroni and cheese,” made with local grains and local cheddar and topped with crisp breadcrumbs. The dish is not on the current menu.

Some add heat, in the form of jalapeños or other hot peppers, and some add meat. The Evergreen, 125 E. Water St., a destination for craft beer and pub food in Hanover Square, gets a thumbs up for its mac and cheese with three cheeses and smoked bacon. The menus at both the Empire Brewing Company Brewpub, 120 Walton St., and Empire Farm Brewery in Cazenovia feature a six-cheese mac and cheese with smoked bacon. Aster Pantry & Parlor, 116 Walton St., Armory Square, offers macaroni and cheese with bologna, smoked bleu cheese and biscuit crumbles as a starter on its (seasonal) dinner menu. Half Moon Bakery and Bistro, 6500 E. Seneca Turnpike, Jamesville, sometimes offers mac and cheese with pulled pork as a lunch special.

Mary Celletti, co-owner with her husband, Jim, of the Golden Spike Pub, 411 W. Manlius St., East Syracuse, takes the approach of the more cheeses, the merrier, with the restaurant’s mac and cheese, which is available only on Fridays.

Her recipe calls for five cheeses: Yancey’s Fancy XXX-sharp cheddar and regular cheddar, American cheese, provolone and a generous dose of good Parmesan, which is added at the end. She prefers whole milk and butter for a creamy sauce base and intentionally undercooks the macaroni elbows, which “puff up” as they bake in the oven. The Spike’s mac and cheese is available as a side dish or a main course (small, medium or large serving), served with a dinner roll.

In Homer, Dasher’s Corner Pub, 2 N. Main St., offers mac and cheese three ways as a main course for lunch and dinner: four-cheese mac and cheese, truffle mac and cheese and lobster mac and cheese. All are popular enough to warrant year-round status on the menu, says restaurant owner George Seibel, with the meaty and gooey lobster version being the top seller.

The four-cheese mac and cheese features cheddar, Swiss, bleu cheese and Parmesan. The latter two cheeses give the dish “a bit more bite on the back of the tongue,’’ he says.

Seibel and his team also break from tradition by using campanelle, a twisted pasta shape, in the mac and cheese trio offered at Dasher’s. Seibel prefers campanelle over elbow macaroni because it “blooms’’ as it cooks, allowing the ruffled edges and hollow centers of the pasta to hold more sauce and cheese.

(Also in Homer, check out the Big Mac and Cheese Burger — yes, a burger topped with mac and cheese — at Hobo’s 281 Bar and Grill, 10 S. West St. The restaurant is operated by the owners of Hairy Tony’s, an upscale tavern in Cortland. The building is owned by Seibel, who gave us this tip.)

Several people also gave a shout-out to the macaroni and cheese served as a side dish at the Dinosaur Bar-B-Que, 246 W. Willow St., and to the restaurant’s “Old School Mac and Cheese,” with mushrooms, broccoli and shell-shaped pasta, served each Friday. As a side, the yellow-orange mac and cheese is a fan favorite. Small batches of it are made daily throughout the lunch and dinner service, according to chef Leland Avellino, and it’s not uncommon for the restaurant to go through 40 to 50 gallons of mac and cheese on a typical night.

The complete list of ingredients is, understandably, somewhat of a closely guarded secret, but chef Avellino hints at them. For home cooks looking to replicate the Dinosaur’s mac and cheese, Avellino suggests using elbow macaroni or campanelle pasta, cooked to just under al dente, and making a basic white-cheese sauce with a blend of cheeses. He recommends a blend of 50 percent sharp cheddar, 25 percent American, 10 percent smoked Gouda and 15 percent Gruyere. Experiment to suit your own taste.

“In the restaurant we use a different blend,’’ he notes, “but it is fun to be creative with your cheese selection.’’

At home, do as the Dinosaur’s chefs do each day: Make your cheese sauce, keep it warm and toss it with cooked pasta. Add to a buttered casserole, top with additional shredded cheddar and grated Pecorino Romano cheese and a sprinkle of Dinosaur Bar-B-Que Cajun Foreplay seasoning. Bake in a 350-degree oven until golden brown and bubbling. If more browning is desired, place under a hot broiler until brown and bubbling. 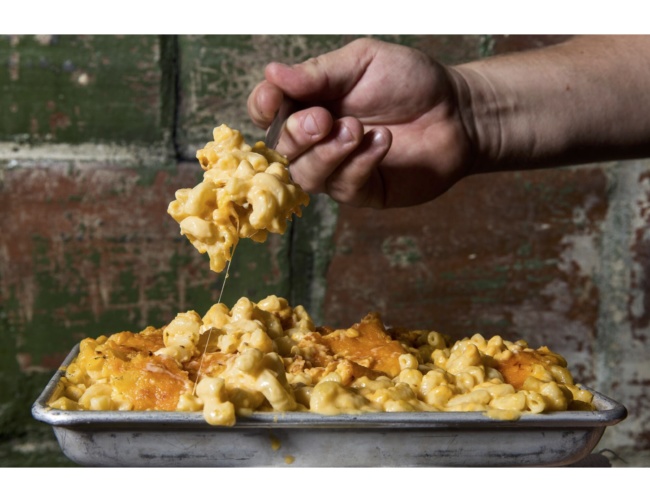