Out of This World: The astronomical imagination of Aspen Mays

Aspen Mays is an artist who finds wonderment in the physical universe, in stars, planets and much more. For Newspaper Rock, on display at the Light Work Gallery, Mays is interested in human attempts to investigate that universe, although she concludes that its beauty is beyond measure or evaluation.
Mays, it should be noted, isn’t an armchair observer. At an isolated site on Chile’s Atacama Desert, she viewed a night sky unpolluted by city lights. Using her eyes instead of a telescope, she found staggering beauty in the Milky Way. She also traveled to the Southwest United States, to a 20-square-foot area known as Newspaper Rock, where Native Americans from several cultures carved petroglyphs depicting humans, animals and symbols on a cliff wall. The carving of drawings on the wall began almost 2,000 years ago.
To communicate her artistic vision, Mays’ photography is done with a nontraditional approach. In the darkroom, she uses dodging, burning and masking tools. She has developed her own forms, patterns and pictograms.
Consider, for example, an untitled piece dominated by intense green color. The caption refers to “fireflies inside the body of my camera, 8:37-8:39 p.m., June 28, 2007.” That the event took place at night has some significance, but the artwork implies that the fireflies themselves are far more important. Here Mays isn’t mocking the collection of data; she’s merely saying that perspective is critical. 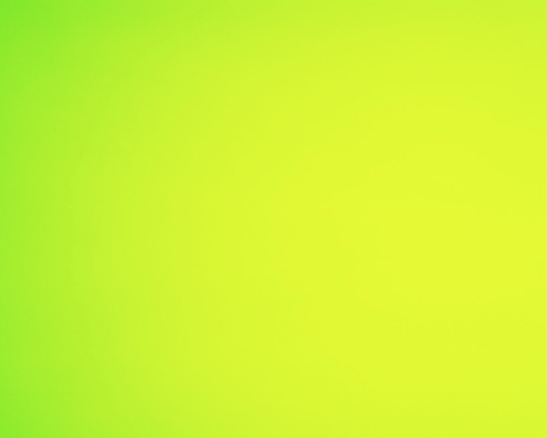 In another work, Mays utilizes the grid of a contact sheet, with 38 rectangular spaces. Five are blank, four depict an elderly woman in a garden, and 29 depict a series of dots suggesting a sky scene. While this artwork is clearly subject to interpretation, it seems to pose several interrelated questions. After viewing four images, what do we know about this person? What do we know from looking at the sky? Do we sufficiently appreciate the complexity and beauty of every aspect of the cosmos?
Elsewhere, “Red Mask,” a piece created when Mays was a visiting artist in Syracuse during 2012, presents a planet-like shape on bright red paper. This seems to reference Mars, the red planet. 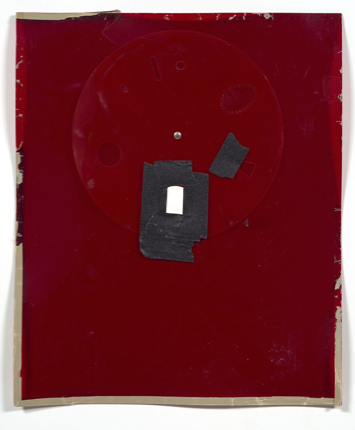 Other works document Mays’ deep interest in astronomy. They include “Telescope Focus Test,” a series of lines is set against a mostly black background, and “Astronomical Twilight,” in which a mostly dark surface is interrupted by a glimmer of light. In a third artwork, Mays places a small orange insert on black paper, implying the presence of a sun.
The exhibit encompasses work dealing with other subjects. A small image portrays lilies in a straightforward manner. “Rock Eye,” a photo taken in Anzo Borrego, Calif., depicts a large rock with a petroglyph carved into it, reminding viewers that Newspaper Rock is in no way an isolated phenomenon. Beyond that, the show draws on other sectors of Mays’ work from her dodge collection. A large work depicts organisms in a pretty manner. 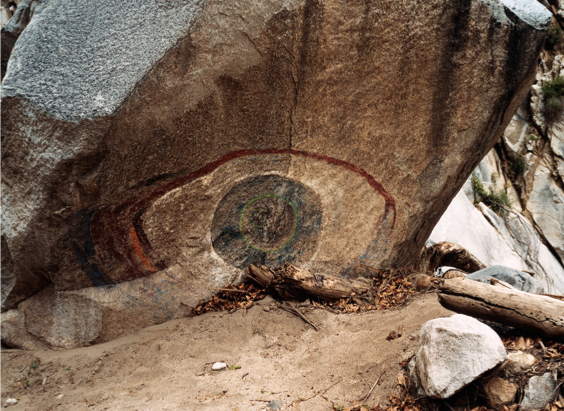 Certainly, it takes some effort to get comfortable with Mays’ visual idiom. Yet the show is neither esoteric nor remote. It’s tied to the world we live in and to the artist’s vision of it. She combines undergraduate coursework in both fine arts and anthropology, hours spent talking to astronomers and other scientists, her own experiences, and a strong belief in the primacy of imagination.
The Light Work exhibit continues Mays’ participation in shows across the nation. Her work has been featured at several venues in Chicago, at the Diego Rivera Gallery in San Francisco, and at the Golden Gallery in New York City.
Newspaper Rock runs through March 6 at Light Work, 316 Waverly Ave., on the Syracuse University campus. The gallery is open Sundays through Fridays, 10 a.m. to 5 p.m. Mays will be feted at a Thursday, Jan. 30, reception from 5 to 7 p.m., with her gallery talk beginning at 6 p.m. The reception is free and open to the public. For more information, call 443-1300.

The Art of Sharing
Unique perspectives at Edgewood Gallery
To Top