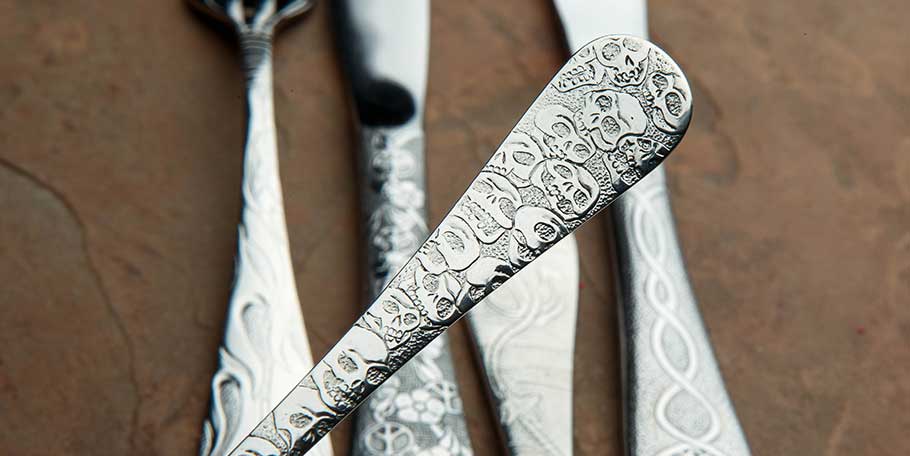 Many of us are committed to buying locally grown produce and handmade, artisan food products. Now let’s give some consideration — with a spoonful of local pride — to the utensils with which we can choose to eat those foods.

Liberty Tabletop, a division of Sherrill Manufacturing, Inc., is the only manufacturer of stainless steel flatware in the United States. It’s made in Central New York, in Sherrill (“the Silver City”), to be exact, and sold directly to consumers online. Inviting a Liberty design to the table takes eating local to a whole other level.

“We like to call it ‘factory to table,’” says Gregory Owens, who co-founded Sherrill Manufacturing with partner Matt Roberts.

Sherrill Manufacturing and its Liberty Tabletop brand grew from the smoldering embers of the former Oneida Ltd., a major manufacturer of silver-plated and stainless steel flatware. The factory ceased operations in Sherrill in 2005, moving production mostly overseas, and Owens and Roberts began Sherrill Manufacturing the next day. 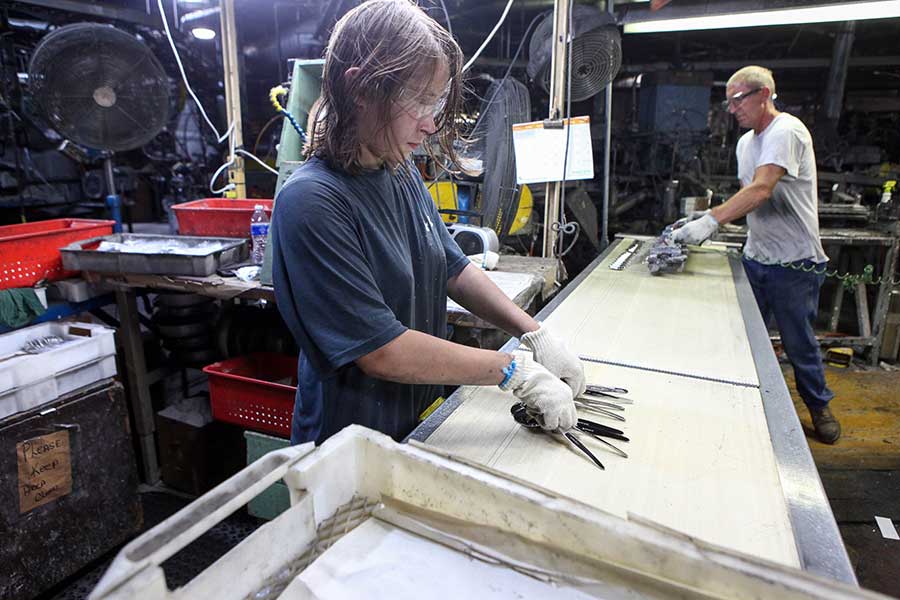 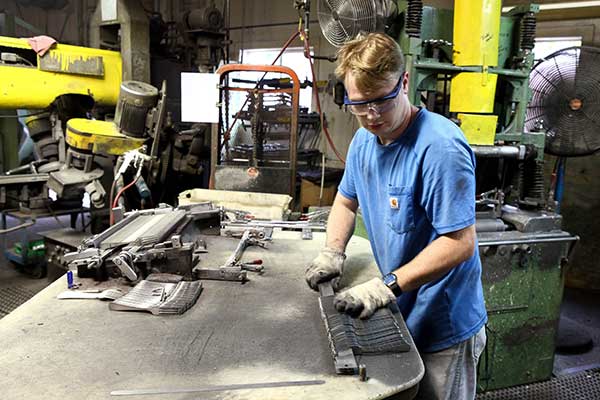 Both worked for Oneida Ltd. when the company had thousands of employees and produced millions of forks, knives and spoons. Sherrill Manufacturing employs about 50 people and is making its mark on the flatware world in small bites.

There was a time, not that long ago, that stainless steel flatware didn’t keep the same company at the table as starched linens and fine china and glassware. But times change, Owens says, and as people dine out more frequently and host formal parties less often, things like sterling silver and silver-plated flatware have fallen out of favor. Why have something if it’s only used a few times a year? And who has time to keep silver polished properly, anyway?

Another reason silverware has fallen out of favor: Men and women are getting married later (around age 30) and coming into married life after living on their own and accumulating cupboards and drawers full of kitchen gear. That has changed the direction of the wedding registry, where couples traditionally requested things like everyday and formal china and table settings. Nowadays, “one size fits all” flatware is desired.

A large segment of Liberty’s customer base, Owens says, is people who want to support American manufacturing jobs and buy a product that’s made in America using American steel. These people understand that American-made goods tend to cost a bit more — and are happy to pay for them.

The challenge as a company, Owens says, is to come up with fresh ideas and ways to market stainless steel flatware — which doesn’t chip, tarnish, rust or wear out — to make it more “of the moment,” even though it is made to last a lifetime.

In addition to its more traditional designs, Liberty Tabletop is focusing on the development of what Owens calls “affinity patterns,”’ or flatware designs that tap into themes that resonate with people and speak to their interests.

For example, add a touch of The Walking Dead and Day of the Dead to the table with Liberty’s Calavera pattern. This eye-catching design, sprinkled with skulls, should appeal to zombie fans and those who want to set their tables with a contemporary flourish. A recent post on Instagram shows Liberty’s Calavera flatware with one of American-made Fiestaware’s Skull and Vine china offerings.

The Old Harbor pattern, etched with anchors, is intended to appeal to people who want to bring a taste of coastal or lake living to the table. 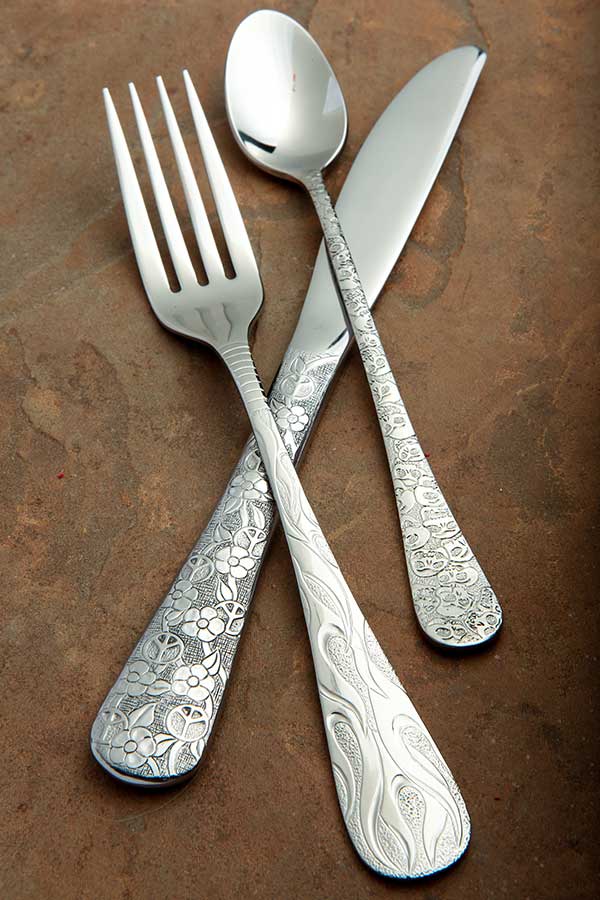 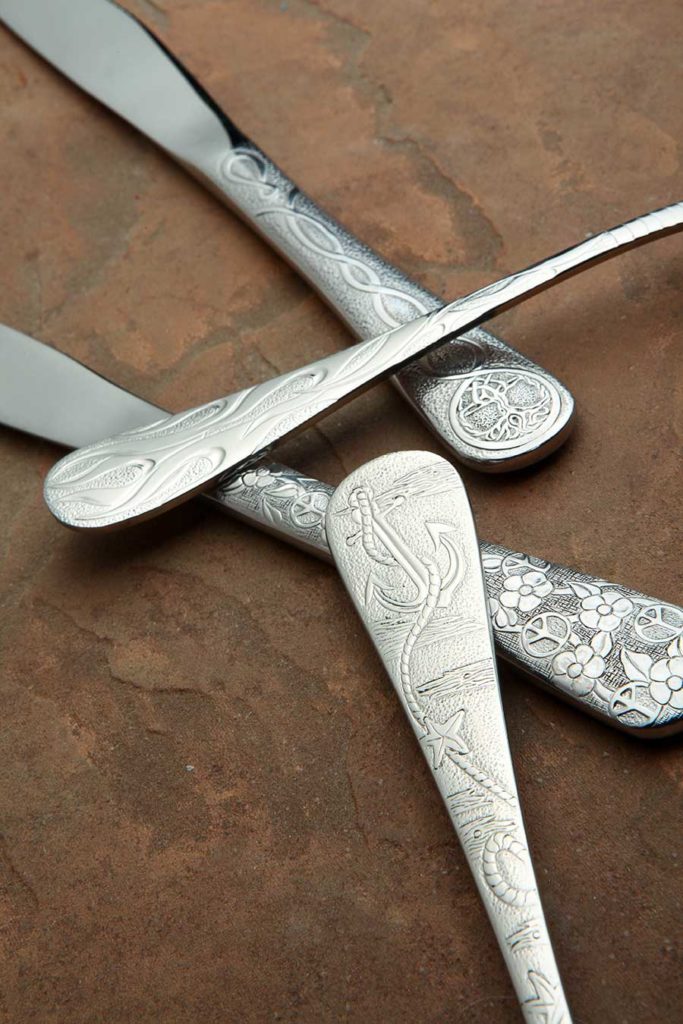 The Celtic pattern, featuring ancient symbols, has quickly become one of the company’s top sellers — so much so that it has sold out several times, Owens says. Designs in the Celtic sets include the Trinity Knot, Tree of Life, Five Fold (five interlocking circles), Triskelion (triple spiral) and Awen (three rays or three flames).

The Flame pattern, inspired by the furnaces that keep the Sherrill Manufacturing factory running, makes a statement for both casual (think barbecue) and more formal dining.

Prices for these new designs start at about $69.95 for a 20-piece set (service for four) that includes four each of dinner forks, salad/dessert forks, knives, soup spoons and regular spoons. Other patterns and treatments are in the works, Owens says. Liberty recently completed prototypes for 1960s-inspired “Daisy and Peace” flatware, with flowers and peace symbols, and may someday introduce tinted flatware.

More traditional designs aren’t going away: The company offers dozens of them. When the former Hotel Syracuse was under renovation and on track to reopen as the Marriott Syracuse Downtown, management reached out to Liberty Tabletop, requested samples and eventually decided to use Liberty’s Betsy Ross pattern throughout the hotel. The pattern is simple, yet elegant, with a teardrop shape and mirror finish. It’s also in service at the White House.

Chuck Anthony, the hotel’s food and beverage director, says the Betsy Ross pattern works well for formal functions in the Grand Ballroom and is equally at home in the chic Eleven Waters restaurant and in Shaughnessy’s Irish Pub. “It is a very versatile pattern,” Anthony says. “Using one pattern was an operational decision that allows us to shift inventory around the building as needed.”

Considering and ultimately choosing Liberty is also in keeping with the hotel’s commitment to sourcing within the community.

“The topic of our flatware often comes up when explaining the restoration of the hotel and our commitment to local partnerships,” Anthony says. “We have wines from the Finger Lakes, spirits from all over New York, and, of course, beer brewed around town. That conversation always inevitably leads to the flatware.”