The petition has over 600 signatures of students, alumni and supporters.

With Le Moyne College’s graduation just a few days away, seniors are calling for the removal of their commencement speaker. Cardinal Timothy Dolan is the Roman Catholic archbishop of the Archdiocese of New York, and is respected in the Catholic community. But he has a checkered past, including what students say is a questionable handling of clerical sexual abuse on his watch. The controversy has led to a dialogue that many find to be in the spirit of Le Moyne’s motto: “Spirit. Inquiry. Leadership.”

Amy Denny, a senior psychology major, started a petition on Change.org to ask the college to disinvite the cardinal, who will receive an honorary degree during the Sunday, May 17, ceremony. “Sexual violence has affected hundreds of thousands of people,” she said. “Somebody needs to be held accountable for this.”

As of this writing, the petition has over 600 signatures of students, alumni and supporters. There are about 600 students in the graduating class. 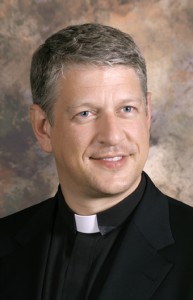 Fr. David McCallum, S.J., executive assistant to the president for mission integration and development at Le Moyne, says that students are “justifiably frustrated” and applauds them for their critical thinking. “I’m really proud of our students for being politically engaged, for being thoughtful and critically minded around issues of social justice and social concern,” McCallum said.

Most of the petition’s signees, like Denny, say that Dolan’s presence at their commencement violates their campuswide efforts to fight sexual violence, and sends a negative message to survivors.

In January 2011, the Roman Catholic Archdiocese of Milwaukee, where Dolan served as archbishop from 2002 to 2007, filed for bankruptcy protection after it was unable to reach a settlement with several victims of sexual abuse. According to documents made public during the bankruptcy proceedings, in 2003 Dolan had authorized several payments of $20,000 to priests accused of sexual abuse to ensure their cooperation in “laicization,” the official Vatican-sanctioned process by which priests are removed from the priesthood. A spokesman for the archdiocese confirmed this, telling The New York Times that the payments were a way to expedite the priests’ removal, “an incentive to go the voluntary route and make it happen quickly, and ultimately cost less.”

The Survivors Network of those Abused by Priests (SNAP), the victims advocacy group that revealed the documents, said that regardless of whether or not they greased the wheels, the payments were unjustified. “In what other occupation, especially one working with families and operating schools and youth programs, is an employee given a cash bonus for raping and sexually assaulting children?” they asked.

Illustration of Cardinal Dolan by DmitryBorshch.

By February 2012, the number of people suing the Milwaukee archdiocese had risen to more than 550. A year later came another damning revelation: In 2008, Dolan had “requested permission from the Vatican to move nearly $57 million into a cemetery trust fund to protect the assets from victims of clergy sexual abuse who were demanding compensation.”

Dolan denied that he moved the money to protect it. But in a 2007 letter to the Vatican, he had stated that, with the transfer, he foresaw “an improved protection of these funds from any legal claim and liability.”

In March 2015, the U.S. 7th Circuit Court of Appeals reopened discussion of whether or not the transfer was dubious, and whether or not that money should be subject to litigation. Peter Isely, a plaintiff in the Milwaukee suits and the Midwest president of SNAP, says this may mean that Dolan is finally open to deposition, and may be compelled to speak under oath about the motives behind the transfer.

Isley says there are still nearly 600 abuse victims awaiting acknowledgment, and Dolan could use this controversy to come clean once and for all. “He had an opportunity when (the allegations) began to surface to tell the truth and he didn’t,” Isely said via phone on May 1. “He needs to come back here and face these hundreds of victims that he betrayed.”

Other students take issue with Dolan’s position — and the official position of the Catholic Church — on same-sex marriage. When leading the 2014 St. Patrick’s Day Parade in New York City, Dolan expressed support for individual gay rights, telling The Washington Post, “I know that there are thousands and thousands of gay people marching in this parade,” and noting that he was “glad they are.”

Yet in a statement on the archdiocese website, he clarified: “Catholic teaching is clear: ‘being gay‘ is not a sin, nor contrary to God’s revealed morals. Homosexual actions are — as are any sexual relations outside of the lifelong, faithful, loving, life-giving bond of a man and woman in marriage.”

Students say that this position does not reflect the changing views of young Catholics. According to a 2014 Pew Research study, support for same-sex marriage among Catholics rose from 35 percent to 60 percent between 2003 and 2014. That number is even higher — 85 percent — among Catholics ages 18 to 29.

The college, which upholds the official positions of the Catholic Church, held a campuswide forum on May 1, during which students expressed their concerns on both issues to faculty and high-level administration. Dolan’s visit has been planned since 2012, and the administration has said that disinviting him is not on the table. Both sides characterized the forum as “constructive” and “respectful.” 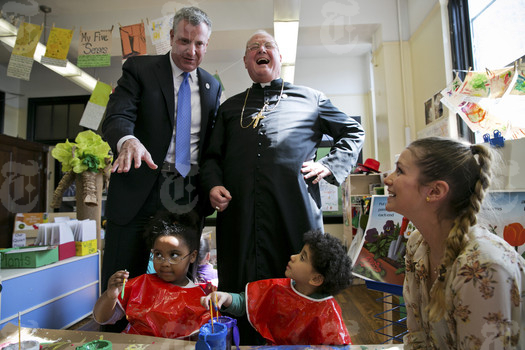 Danielle McMahon, a senior biology major, signed the petition and strongly opposes Dolan’s presence. But she says she is happy with the way Le Moyne’s faculty and administration encourage inquiry. “I really appreciate the college and their reaction to situations such as these,” she said. “They really are dedicated to the spirit and the mission of the Jesuits and giving us the best education.”

Denny says that, through the dialogue raised by her peers’ advocacy, she wants to help people understand that this is a much wider issue. By pointing the finger at the cardinal, “We want to show that we don’t tolerate sexual violence on our campus,” she said. For Dolan, the message is: “You were involved, you’re an official, and you can change this. Here’s our opposition. Here’s our disapproval.”

McCallum says he is happy that the students are engaged, passionate and inquisitive about the church’s positions and future. “The questions that they’ve raised are really important ones, and they’re by no means settled issues,” he said. “The issues around the church’s position on human sexuality or how we handled the sexual abuse crisis — a lot of that stuff continues to need quite a bit of work. We encourage them to be active in that work moving forward.”

Moonlighting Becomes Them
A Hair-Raising Experience
To Top