With so many lofty legal principles in play, it was gratifying to see Syracuse finally getting its moment where the sun doesn’t shine.

As European authorities were foiling a massive terror attack in Belgium, Syracuse had concerns of its own: the Rick Springfield butt retrial.

By now you know how it ended: A jury needed an hour last week to clear the pop star and his slender “butt region” of negligently injuring a concertgoer in 2004 at the state fair. Observers widely hailed the decision as consistent with the laws of New York state, and physics.

“He doesn’t even have an ass. How could he knock anyone over with it?” posteriorated Leann Walsh, manager at the Blue Tusk pub.

Springfield was performing in the crowd when, according to a lawsuit filed by Vicki Calcagno, of Liverpool, he fell backward, striking her with his backside. She barely regained consciousness in time to snap more photos of the pop icon and to see a free Cyndi Lauper concert at Chevy Court the next week. In a cosmic sense, the lawsuit was Springfield’s punishment for giving the world the 1981 smash hit “Jessie’s Girl,” which I’m now unable to stop humming no matter how many times I bash my temples with a waffle iron. Please, make it stop.

With so many lofty legal principles in play, it was gratifying to see Syracuse finally getting its moment where the sun doesn’t shine. Trial coverage went global, and the entertainment industry watched closely. Would entertainers still be allowed to entertain, or would they be reduced to tightly clenched, risk-managing robutts?

“We have to have freedom,” Springfield said in victory. “We’re human beings.”

The trial’s most dramatic moments came — where else? — at the end. As the lawyers made their closing arguments, Calcagno began to tremble. Once the jury was sent to deliberate, she was overcome by a seizure-sobbing-twitching episode, a scene straight out of General Hospital, the soap opera in which Springfield appeared for years. Paramedics arrived and carted her off to wherever they take litigants whose cases are so weak even the Heavy Hitters take a pass. Observers rolled their eyes, and the town’s personal injury lawyers shuddered. After this, good luck getting a favorable judgment from a local jury even if your client was impaled on a nuclear fuel rod. 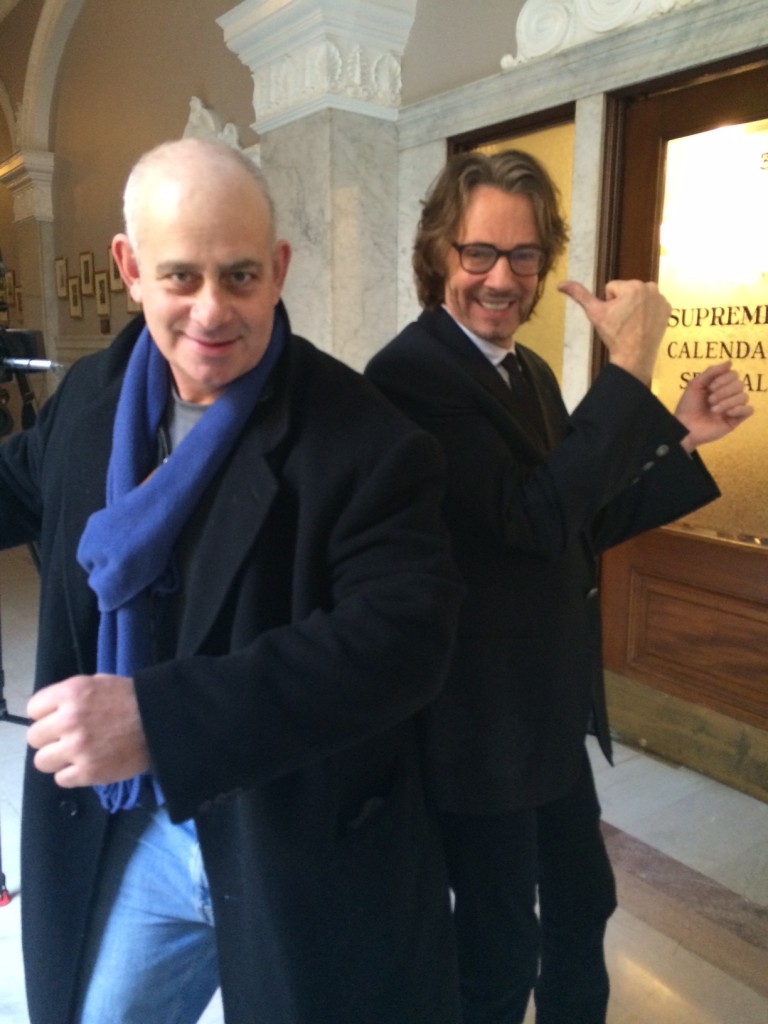 Springfield and Kramer joyously bumping butts to celebrate the verdict.

It was left to Springfield to save us from this circus. Throughout his six-day exile, the singer-actor-author, a youthful 65, praised the town’s architecture, the warmth of our people and the quality of our restaurants, giving shout-outs to Lemon Grass and Taste of India. He signed autographs. He even promised to come back.

“People here can be hard on the place,” I told him, neglecting to disclose that I’m a leading offender. “Sometimes they don’t appreciate our assets.”

As the week unfolded, I’ll confess I felt a connection with Springfield, and it wasn’t just his charm and resolve. As a white male whose buttock region also has been burned by the public spotlight, I felt Springfield’s pain.

In my case, it’s the negative attention that comes from acute plumber’s butt, the demeaning name for a syndrome that afflicts millions. Kramer Krack sighting No. 11,602 was reported Friday night at the Ridge bar in Chittenango. Everyone there had a good laugh at my expense. Again. Thanks especially to those of you who captured the moment on your cell phones. How compassionate.

Alas, the photo accompanying this column also is misleading. While it might look as if Springfield and I are joyously bumping butts to celebrate the verdict, there’s a back story. The next morning, as he was on his way home to sun-kissed Malibu, I awoke with a sharp pain in my bootyius maximus, shoulders, neck and brain. Evidence will show that the injuries were sustained in the recoil zone, or “spring field.” Sorry, Rick, but my lawyer at 1-800-JUSTASS says my case is rock solid. We’ll be in touch.